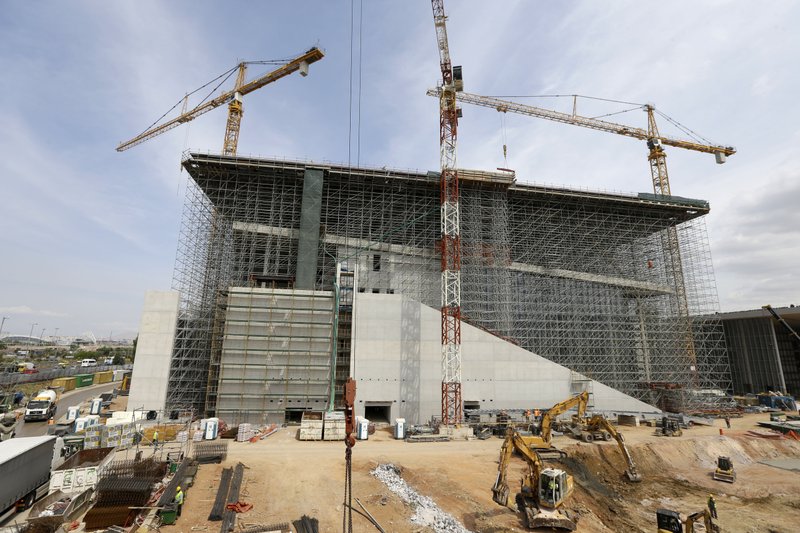 Cranes operate at the construction site of the Stavros Niarchos Culture Center where the new opera house and national library will be completed in 2016, in southern Athens, on Monday, June 8, 2015. The 566-million euro project is one of the country's few privately funded projects since the country was struck by a major financial crisis in 2009.

ATHENS, Greece -- Greek bailout negotiators sought Monday to narrow their differences with international creditors after days of acrimony over rival proposals for a deal to unlock Greece's remaining rescue funds.

With Greece facing an end-of-month deadline to secure a deal, government spokesman Gabriel Sakellaridis said negotiators were in Brussels to explore the "scope for convergence" with creditors and indicated there was room for negotiation.

He also sought to douse talk of elections, saying it was not something the government was considering. Some ministers had raised the idea as an option if a deal cannot be reached.

German Chancellor Angela Merkel warned time was running out and said that while Greece's euro partners want the country to remain in the eurozone, Athens has to do its part by implementing changes.

"There's not a lot of time, that's the problem, that's why we have to work as intensively as possible," Merkel said at the end of a Group of Seven summit in Elmau, Germany.

"Everyone at the table wants Greece to stay in the eurozone," Merkel said. "But as I said ... we have rules."

President Barack Obama also weighed in, saying there was a "sense of urgency" to resolve the situation.

"What it's going to require is Greece being serious about making some important reforms," Obama said. The Greeks, he added, will have to "make some tough political choices that will be good for the long term."

Obama also stressed that the international community should "recognize the extraordinary challenges that Greeks face, and if both sides are showing sufficient flexibility, then I think we can get this problem resolved."

A resolution is needed by June 30, when Greece's bailout program ends and the remaining $8.1 billion in rescue loans will no longer be available. Without the funds, Greece cannot repay its debts and could end up crashing out of Europe's joint currency.

Sakellaridis reiterated that Greece considers its proposal -- a 47-page document delivered by Tsipras during a visit to Brussels last week -- to be the basis for a deal.

"The Greek negotiating team that has gone to Brussels is evidently there so as to see the scope for convergence so there can be a mutually acceptable solution to both sides," Sakellaridis said.

The two sides disagree on a number of issues, such as pension cuts and labor changes. Each side has said it expects a response to its own proposals.

Holger Schmieding of Berenberg Bank said the "room for maneuver looks limited," noting that hard-liners within Tsipras' radical left party and the government's nationalist coalition partner "may oppose almost any condition which lenders must attach to the disbursement of money." And on the lenders' side, he said "the IMF and -- to a lesser extent -- the ECB seem to be against any further concessions."

Jitters over Greece swelled when the government delayed a payment due last Friday to the IMF. Instead, it opted to bundle all four IMF repayments due this month into one on June 30.

Tsipras on Friday described the institutions' proposals as an "unpleasant surprise," saying they ignored progress in the previous months.

The rejection sparked the ire of European Commission President Jean-Claude Juncker, who is considered more lenient toward Greece than the IMF, European Central Bank and Germany, which is the largest single eurozone contributor to Greece's bailout.

"We will continue to work for a solution," Commission spokesman Margaritis Schinas said in Brussels. "There is a position of the three institutions which is a good basis for finding a solution, provided that all sides concentrate on the remaining issues to be solved."

If no deal is secured, one possibility would be for the current bailout to be extended again. Originally due to end late last year, it has already been extended twice.

Sakellaridis said this was not something the government was aiming for and said Greece wants a comprehensive solution that will also tackle the debt issue. Athens argues its debt, currently at more than 170 percent of annual economic output, is unsustainable and that some form of debt relief is needed.

The current stalemate comes after five months of difficult negotiations since Tsipras won January elections on promises to end austerity imposed in return for two bailouts worth about $230 billion.

Finance Minister Yanis Varoufakis, in Berlin to deliver a speech, met with German counterpart Wolfgang Schaeuble for talks that the Greek minister described as "productive."

Information for this article was contributed by Raf Casert and Frank Jordans of The Associated Press.