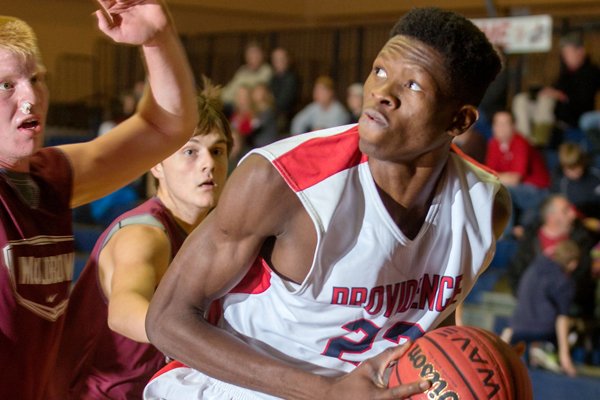 S.K. Shittu with Providence Academy works his way to the basket against Muldrow on Thursday, Nov. 13, 2014, in Rogers.

LAS VEGAS -- It doesn't appear there will be a shortage of big men with Arkansas ties for Razorbacks Coach Mike Anderson to recruit in the next couple of years.

The Arkansas Hawks 15-under team has three players that stand 6-9 and one 6-8, and two of them are 14 years old. The majority of college coaches during spring and summer events focus on scouting 16- and 17-year-old prospects, but the Hawks are different.

Anderson and his three assistants were on hand for the Hawks' game Saturday afternoon. They were 5-0 going into the championship round before losing 56-50 to D1 Minnesota at the Adidas Upraising Summer Championships in Las Vegas.

Sophomore forward Ethan Henderson, 6-8, 190 pounds of Little Rock Parkview, and sophomore forward Reggie Perry, 6-9, 205 of Tallahassee (Fla.) Maclay Prep, are rated the No. 13 and No. 11 prospects in the nation for the 2018 class by ESPN. Perry lived in Little Rock until about two years ago.

"It's a great opportunity for a coach to come see us play because we're so young and we have much more to go," Henderson said.

Henderson is someone who could play small or power forward in college. He has a nice inside-outside game that has gotten better since last year.

"I didn't have a lot of moves, but this year I've gained a lot more post moves," Henderson said. "My shot has improved and ball-handling skills and passing and going up the court."

In addition to Arkansas, Henderson is drawing interest from LSU, Notre Dame and Stanford. He plans to attend the Hogs camp in August. After speaking to his doctor, Henderson said he's not finished growing.

"I noticed him when he first walked in while we were out there," Perry said.

Perry is a fan of Anderson's style of play.

"They're one of the top schools I actually want to go to," Perry said.

His cousin, Jay Williams, played for Duke in 1999-2002 and was selected in the first round of the NBA Draft in 2002 by the Chicago Bulls.

"I'm waiting on Duke," he said. "I got a couple of phone calls from Duke and Kentucky, but I really love Duke."

Freshman forward-center Kalin Bennett, 6-9, 230, lived in Little Rock before moving to Texas and now attends Canyon Creek Christian Academy in Richardson. He has excellent mobility for someone his age and will likely add a few more inches, according to his doctor.

He noticed Watkins in the crowd.

"It was a great experience and a great way to show what I can do out here," Bennett said. "I'm just glad to do it with my brothers."

He would embrace the chance to play for the Razorbacks.

"If I do go to Arkansas, it would actually be pretty great because I would be in my home state," he said.

Freshman forward/center Caleb Stokes, 6-9, 250, of Little Rock Parkview, is expected to grow to 6-11 and is another one that runs the floor well and shows strong promise. He scored 23 points in the Hawks 78-48 victory Friday night over Stackhouse Elite from Atlanta.

Arkansas Hawks 17-under forward S.K. Shittu grew up in Nigeria and moved to the United States about two and half years ago. He appreciates the opportunity to play in America.

Shittu, 6-9, 200, of Rogers Providence Christian Academy, has been able to travel the country with the Hawks and compete against some of the best talent in the nation, including the Adidas FAB 48 in Las Vegas.

"It's very awesome because everybody wants to go hard and give you the best shot at trying to get a win," Shittu said.

He has earned scholarship offers from schools like LSU, Oklahoma, Tulsa and Central Arkansas, while seeing interest from Arkansas and others. He played in front of Arkansas associate head coach Melvin Watkins twice during pool play. He and Watkins talk often.

"Coach Watkins talked to me the other day just to check on me and asked me how I've been practicing," Shittu said.

He likes Arkansas' style of play and said he would welcome an offer from the Razorbacks.

"Yes, they always play fast and play strong," said Shittu, who will be a junior at Providence.

Shittu, whose favorite American food includes hamburgers and pizza, scratches his head over what pizza is delivered in.

"Pizza usually comes in a round shape and the box comes in a square," Shittu said. "That doesn't make sense to me. If they make a round pizza, they got to make the box round."