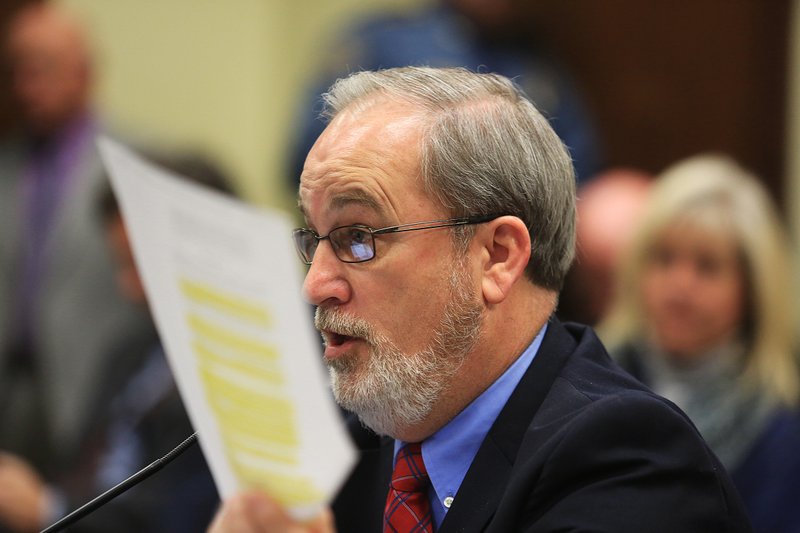 A special report by the Legislative Audit Division faulted the department for awarding contracts without competitive bidding, failing to hold vendors accountable and failing to adequately disclose projects to the Arkansas Legislature.

In a written response included with the report, department officials acknowledged shortcomings in the management of technology projects, but they denied violating state procurement laws and rules.

Gov. Asa Hutchinson is "going to be reviewing the final report and meeting with DHS officials to ​discuss it," spokesman J.R. Davis said in an email Tuesday afternoon.

Rep. Kim Hammer, R-Benton, and a chairman of the Legislative Council's Joint Performance Review Committee, said the report "validates that we've got issues that have to be cleaned up."

"It brings additional support that I think there were things that were done on the front end that someone needs to bring some explanation to and be accountable for," Hammer said.

Legislators have been critical in recent months of a number of DHS contracts that exceeded original cost estimates and that were made outside of normal procurement procedures.

Hammer said he wants to know more about a $1.5 million grant from Arkansas Blue Cross and Blue Shield that helped pay for the department's initial $3 million contract with McKinsey and Co. in 2011 to begin designing changes in how the state's Medicaid program and private insurance companies pay health care providers.

The state has since paid McKinsey a total of $89.4 million for work on the payment overhaul, according to the audit report.

According to the report, the department cited the grant as a reason for seeking an "emergency" review of the contract by the Legislative Council, a 36-member committee from which state agencies often must seek approval for certain actions.

When an emergency exists, state procurement rules allow the council's chairmen or chairmen of the council's review committee to review such contracts on behalf of the full council and then present a report to the council at its next meeting.

According to the legislative audit report, the grant was contingent on the contract being "awarded to McKinsey on an emergency procurement," which bypassed normal contract procurement.

The auditors contended that the grant offer wasn't a proper justification for an emergency procurement, which the rules say can be done only when "using other methods would endanger human life or health, state property or the functional capacity of the agency."

"I think that's something that will need to be discussed, as to why was it an emergency," Hammer said.

In their response, department officials said they were protecting "property" by using the grant money instead of state tax dollars.

The DHS officials added that the state Department of Finance and Administration's Office of State Procurement and the Legislative Council approved the emergency review.

The audit report likely will be discussed at the Joint Performance Review Committee's meeting next week, Hammer said.

Auditors also noted that the Office of State Procurement approved awarding the contract to McKinsey without competitive bidding even though "four national management consulting firms with a specialty in health care delivery systems" were evaluated by representatives from DHS, Arkansas Blue Cross and Blue Shield and QualChoice Health Insurance.

Auditors also wrote that former Medicaid Director Andy Allison "signed some of the McKinsey contracts, and as of 2015, was employed by McKinsey."

In their audit response, the officials noted that Allison did not start working with the department until November 2011, after the department had already contracted with McKinsey.

DHS officials also said that department and insurance company representatives "determined that only McKinsey possessed the requisite qualifications, experience, and resources needed to meet the performance level required by the Department."

In addition to the McKinsey contract, the legislative auditors examined contracts for replacing the Medicaid program's electronic enrollment and eligibility verification system and for building an electronic tool to assess disabled people's needs.

Delays in implementing the enrollment system have caused a backlog in the processing of Medicaid applications and in checking the eligibility of those who have been enrolled for a year or more.

The cost of the assessment project, meanwhile, has grown from just over $2 million to more than $21 million, including $4.8 million that was paid to a company that was later fired after failing to deliver a suitable product.

In response to legislators' concerns about the two projects, Hutchinson last month announced that all information technology contracts that could cost more than $100,000 are being reviewed by his office and the state Department of Information Systems.

Act 557, passed by the Legislature this year, also requires performance-based measures to be included in all state contracts for services starting Aug. 1.

The Human Services Department in 2012 awarded the contract for the enrollment system to Noridian Administrative Services, which estimated the cost of the project at $65.4 million, over Northrup Grumman, which bid $52.8 million, the report says.

Before beginning negotiations with Noridian, the department failed to document the purpose and objectives of the negotiations as state procurement rules require, auditors wrote.

When the department failed to reach an agreement with Noridian on the contract's terms, the department decided to hire other companies through a statewide cooperative purchasing agreement, even though the state's purchasing rules allowed it to negotiate with the second-highest-scoring bidder when time permits, auditors wrote.

The cooperative purchasing agreement allows state agencies to hire temporary information technology personnel for fixed hourly rates, but it does not allow the agencies to hold the vendors responsible for delivering a finished product, auditors wrote.

Computer Aid Inc., which wrote the request for proposals for the eligibility verification contract, is also paid a 6.9 percent fee for its work on the cooperative purchasing agreement, auditors wrote.

So far, the Human Services Department has spent $106.1 million on the project, which is expected to cost a total of $180 million to $200 million, the audit report says.

The department "has acknowledged that it exercised inadequate project management" over the work, department officials said in their response.

Using the cooperative purchasing agreement was "the most viable approach available" to build a system that had to be ready to begin enrollment in the state's expanded Medicaid program on Oct. 1, 2013, they wrote.

To improve its management of the project, the department has established a project management office and hired a company to help with the management, the officials wrote in their audit response.

With regard to the disabilities assessment project, auditors wrote that the department "did not properly use sole source procurement" when it hired CoCentrix after canceling a contract with CH Mack.

The department also improperly used purchase orders to pay for almost $1.4 million worth of services from CH Mack instead of conducting an additional procurement process, auditors wrote.

Auditors also wrote that the department's contract with CH Mack "did not contain specifically-defined objectives or detailed, measurable deliverables."

DHS officials said the lack of performance measures in the contract was consistent with "general state practice at the time," which was to require such measures only for professional or consultant services contracts.

They said the department's sole-source contract with CoCentrix was to conduct a pilot project related to the assessments. The department then hired CoCentrix to develop assessment software through a state cooperative purchasing agreement, department officials wrote.