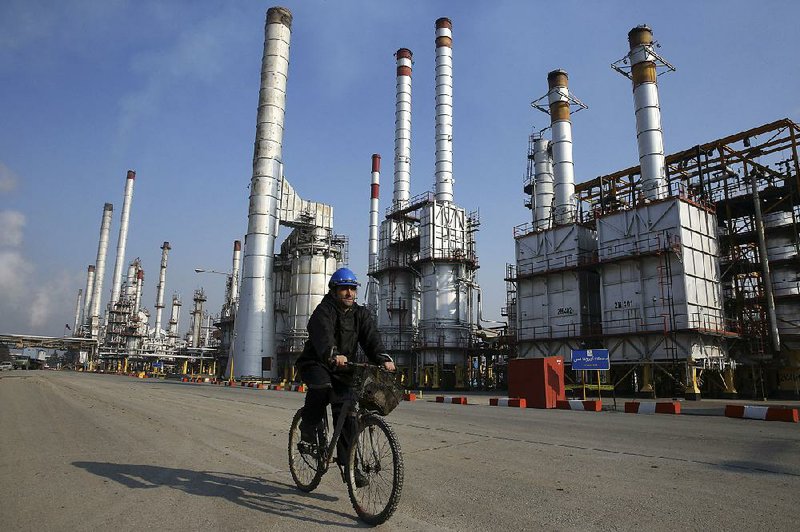 An Iranian oil worker rides a bicycle to get around an oil refinery near Tehran in December. Oil prices that slumped last year could take another hit if Iran begins to pump more crude into the market.

Oil companies that have been adjusting to lower crude prices by slowing production and exploration are now weighing the effects of another variable with the potential to add to a global glut: Iranian oil production.

The agreement reached between Iran and six nations led by the United States last week in Vienna over Iran's nuclear program means the nation is closer to returning to the oil market later this year or in early 2016, barring any hitch in the finalization of the deal, analysts said.

"We do think at the end of the day the deal will go through," said Tariq Zahir, a managing member of Tyche Capital Advisors LLC.

"We firmly feel we are going to break $50 and see the lows we saw at the beginning of the year," he said. "We have a lot of oil right now."

The deal to limit Iran's nuclear program for more than a decade in return for the lifting of economic sanctions was announced Tuesday after months of negotiations between Iran, the United States, China, France, Russia, the United Kingdom and Germany.

The international sanctions against Iran remain in place until a resolution is drafted and passed by the United Nations Security Council and the U.N. International Atomic Energy Agency has verified that Iran has complied with the agreed upon restrictions. The U.S. Congress also has 60 days to review the agreement.

If the deal gets through the red tape and sanctions are lifted, changes to the oil market will depend largely on one factor, analysts said: "How long will it take Iranians to restore production or at least raise it?" said Michael Lynch, president of Strategic Energy and Economic Research Inc.

Iran has an estimated 40 million barrels of oil in storage that it could quickly move to market, although the quality of the crude is in question. The struggle for the country will be in reviving its oilfields and developing new drilling technology that has been blocked by the sanctions, analysts said.

"They're going to need international help to get their oil sector nursed back to health," said Jim Krane, an energy research fellow at Rice University's Baker Institute for Public Policy.

But before foreign investment starts flowing into the country, "oil companies want to see that Iran is actually abiding by the terms of this nuclear deal," he said, adding that some Western energy firms will view Iran as an investment opportunity.

Still, it will take the country at least six to nine months to restart its oilfields, Lynch said.

Prices have declined as a result of a worldwide supply glut -- largely driven by increased U.S. oil production -- and low global demand. And despite cuts by energy companies, U.S. production remains strong and other countries such as Iraq and Saudi Arabia are pumping record amounts of crude.

Led by Saudi Arabia, the Organization of the Petroleum Exporting Countries has so far refused to cut its production levels, a move analysts say has been done to maintain its market share and curb U.S. shale production.

"There's going to be a lot of pressure on other OPEC members to cut production, especially Saudi Arabia," Lynch said. "I can see them kind of holding out and trying to get some concessions from the Iranians."

Iran and Saudi Arabia are rivals in the oil market and in the region, including most recently in Yemen. Saudi Arabia earlier this year made airstrikes in that country against Shiite rebels known as Houthis, who are backed by Iran.

"I think that means the high cost [U.S. Shale] players are in trouble," Lynch said. "What you are going to see is consolidation and further moves to cut."

A lot of how Iranian oil will play into the market will depend on demand. China could be on the brink of an economic slowdown. China's economic growth has been stuck at a historically low 7 percent for about a year now.

For the rest of 2015, demand in the United States will taper off as the peak summer driving ends, Zahir said.

But not all analysts believe that energy demand will remain sluggish.

"It's very possible that demand for oil could be a lot stronger than we think," said Phil Flynn, an energy analyst with Price Futures Group. "It's hard to say what the environment is a year from now."

"They said a lot of companies have been able to reduce their costs by a significant function by being more efficient, but I think they are challenged in this," said Rob Lutts, president and chief investment officer for Cabot Wealth Management, adding that for U.S. consumers the price drop has been like a "tax cut for the economy."

In response to weak oil prices, energy producers have cut their spending and laid off employees. This includes Murphy Oil, of El Dorado, which slashed its capital spending by 33 percent this year, including a 46 percent reduction in the Eagle Ford Shale in Texas.

Analysts said that it could take several years for the market and prices to stabilize, especially if Iran's oil returns to levels seen before the sanctions, forcing energy companies with high costs to make further cuts.

"The weak won't survive," Zahir said. "They will be gobbled up by the bigger guys."