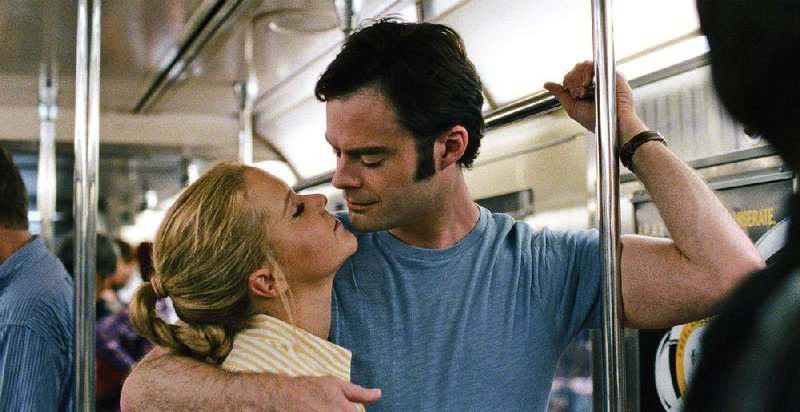 Footloose Amy (Amy Schumer) is required to recalibrate her life when she meets Aaron (Bill Hader) in Judd Apatow’s Trainwreck.

In Trainwreck, the film's writer and star Amy Schumer wonders whether commitment and sobriety are not ideals but the greatest of horrors.

Thankfully, she's a capable enough wordsmith and performer to make her character's phobia of monogamy endearing. There are so many choice moments that one ceases to care Schumer didn't bother to come up with a different name for her role.

Rating: R, for strong sexual content, nudity, language and some drug use

Perhaps Amy's aversion to settling down is in her blood. The film begins with her father (Colin Quinn) telling the young versions of Amy and her sister Kim why his marriage to their mother is coming to an end. In as child-friendly a manner as he can muster, he admits being a chronic lecher. By comparing his daughter's dolls to his indiscretions, he almost makes his betrayal of their mom's trust seem rational and fair.

It's no wonder that as a biological if not emotional adult, Amy (Schumer) shares her dad's issues with investing an emotional or sexual bond with a single person. She even considers it a mistake when she spends the night with a man she has taken to bed.

Downing a distillery's worth of alcohol doesn't make settling on a guy any easier.

In Amy's defense, half the population of New York makes questionable mates for anyone. The idea that there are no good beaus available is pretty worn out, but Schumer and her cast mates create dozens of memorable characters.

At least this collection of undateable dudes is consistently memorable and engaging. For example, Steven (moonlighting wrestler John Cena) is the closest thing Amy has to a boyfriend, but he spends most of their time together admiring his own muscled physique. His idea of a compliment is to tell her that he loves the fact that she looks like a dude from behind. (This might be the strangest pickup line since Anakin Skywalker wooed Padme with his thoughts on sand.)

While on a journalistic assignment, Amy finally discovers a fellow who adores her and is a decent human being. Initially, she's sent to cover a prominent sports physician named Aaron (Bill Hader) because she has nothing but contempt for athletics and knows nothing about them.

She doesn't even recognize LeBron James (who demonstrates a gift for comedy that's comparable to his skill on the court) when the Cleveland Cavalier gradually reveals himself to be one of Aaron's clients as well as his best friend.

If her character is promiscuous, a better adjective for Schumer herself is generous. As a performer and writer, Schumer readily shares the spotlight, giving the rest of the cast a chance to make an impression. Saturday Night Live alumna Vanessa Bayer (as Amy's troublingly perky co-worker) and Oscar winner Tilda Swinton (as her Machiavellian boss) are both hilarious, even if they aren't seen that much.

If Schumer is content to not hog the frame, Hader, another Saturday Night Live veteran, is an able foil for her. Having made his mark with a series of eccentric characters, he plays a likable, stable fellow who isn't dull. He gives Aaron just enough wiggle room so that he comes across as a believable if not completely ideal mate.

In the first movie he has directed from someone else's screenplay, Judd Apatow proves that avoiding technically demanding camera setups or creative editing is not a flaw. While James proves to be funny because he's willing to pretend to be emotionally needy and parsimonious, Apatow has a radar for other nonactors who play themselves and don't embarrass themselves and the film in the process.

Apatow's slow pacing and tendency to stretch running times once led Triumph the Insult Comic Dog to quip that one of the director's films should have been titled This Is 40 Minutes Too Long. With Trainwreck, however, there isn't much dead weight, and the extra time helps make initially obnoxious characters easier to take.

If Amy lacks her sister Kim's (Brie Larson) stable career path and domestic rectitude , she becomes sympathetic because she works to keep her now disabled dad in a dignified facility instead of flophouse. Cutting scenes like these would make the film become little more than a shallow raunch fest.