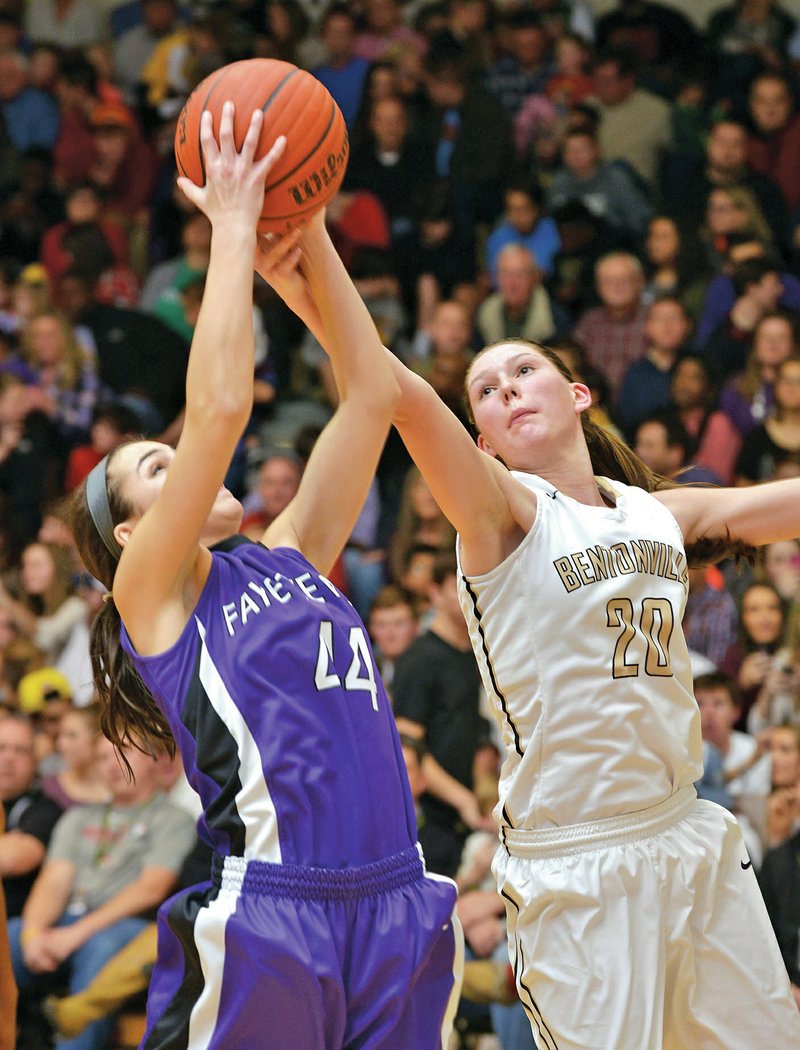 BENTONVILLE -- Payton Willis had to wait a year to pull off some game-winning heroics in Tiger Arena.

The Fayetteville junior hit two free throws and a layup in the closing moments Friday as the Bulldogs took a 49-46 victory and handed Bentonville's boys their first 7A-West Conference loss.

"I'll take it," Fayetteville coach Kyle Adams said. "I don't know if it was a year late or right on time, but he took the game on his shoulders in the last couple of minutes and wanted the ball. I was proud of him, and others stepped up as well."

Bentonville (11-6, 5-1) led 46-45 on Malik Monk's two free throws with 2 minutes, 39 seconds left, and both teams wasted scoring opportunities over the next two minutes. The Tigers missed three free throws that could have padded their lead, and the final miss gave Fayetteville (16-4, 4-3) the ball with 20 seconds left.

Willis, who had a turnover last year that allowed Monk to hit a game-winner, drove toward the basket when he was fouled by Monk, and his two free throws with 7.4 seconds remaining put Fayetteville ahead. The Purple'Dogs then forced a jump ball after double-teaming Monk in the backcourt with 2.7 seconds left, and Willis was underneath the bucket to get a layup as the buzzer sounded.

"It hurt last year, and it was on my birthday too," Willis said. "I just wanted revenge, and I was grateful.

"I was just thinking about being at home with my dad in the gym when I hit those two free throws. I felt like nobody was there but me and my dad."

"We definitely felt like this one got away," Bentonville coach Jason McMahan said. "I felt like the last minute of the game, Fayetteville made all the right plays and executed at a high level, and we didn't."

Fayetteville opened the second half with a 13-3 run to pull away from Bentonville and complete an unbeaten run through the first half of 7A-West play.

Lauren Schuldt's two buckets to close out the first half gave the Lady Purple'Dogs (15-5, 7-0) a 30-22 halftime cushion, then started their outburst with nine straight points. Schuldt ended the run with two free throws and gave Fayetteville its biggest lead of the game, 43-25, with 1:43 left in the third quarter.

"I was pleased with how well our girls defend," Fayetteville coach Vic Rimmer said. "We had some offensive lapses, and that's how they got back in the game. Defensively, I thought we played consistently all night."

Pink Jones led Fayetteville with 13, followed by Deshundra Morgan with 12 and Lauren Holmes with 10. Jordan Taylor had 21 for Bentonville (13-7, 4-3), while Madison Brittain chipped in 12.

Henry Apple can be reached at nwadg.com or on Twitter at @NWAHenry.