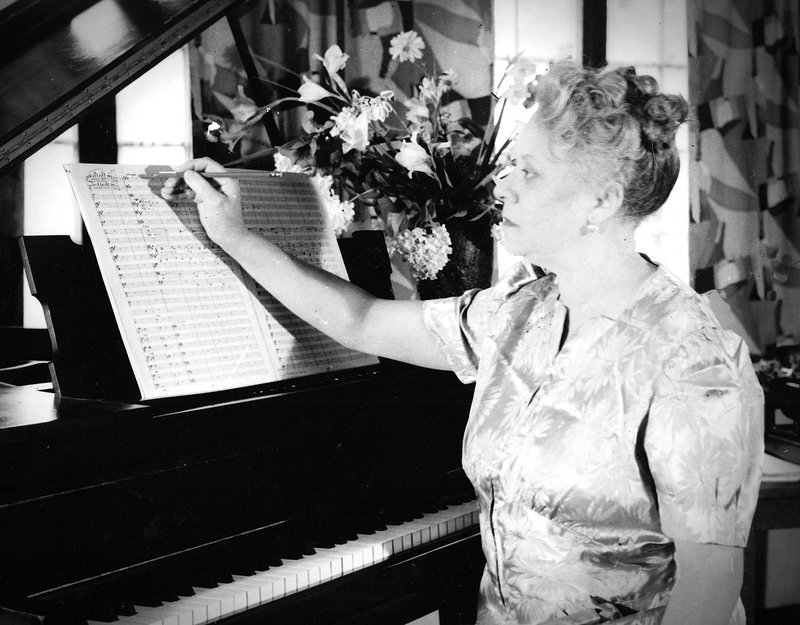 Courtesy Photo Florence Price (1887-1953) was a Little Rock composer and musician who fell out of popularity in the 1940s. A recent discovery of previously unknown compositions has led to a resurgence in interest in her work. She is the main subject of a two-day symposium this weekend at the University of Arkansas.

The University of Arkansas music department is hosting a symposium this weekend celebrating the sacred and secular music of African and black American traditions.

The festival will feature internationally recognized musicologists, historians and clinicians whose combined efforts will not only celebrate the rich cultural traditions of this music but also the life of a beloved member of the department's faculty who died last October.

The Eddie Wade Jones Black Music Festival opens today, and although the event was only in the beginning stages of planning, Jones' 24 years with the faculty and his passion for the festival led his peers, including festival director and professor James Greeson, to take up the torch.

"Plans were in place for the symposium, but when he died, suddenly it was up in the air," Greeson says. "I myself had been engaged doing a lot of work on Florence Price for a documentary film I was producing. So instead of the original plan, I decided to set it up as a video for the symposium on the music of Florence Price."

Price was born in 1887 in Little Rock to the first African-American dentist in Arkansas, he says. Her mother provided her with her first music instruction and at 14, the teenage prodigy graduated from high school and attended the New England Conservatory of Music at 15, Greeson goes on.

"She graduated with two degrees three years later," he says. "So she was genuinely a prodigy. She was brilliant. But being a woman and being black, she had a lot of hurdles to climb during that era."

Price eventually married an African American lawyer, but within a few years, the couple left the dangerous "Jim Crow" South for Chicago, where Price continued to compose and teach. She won the Wanamaker Prize in 1932 with a composition that was performed the following year at the 1933 World's Fair by the all-white Chicago Symphony.

"That was a huge deal, first of all because she was black and second because she was a woman," Greeson says. "One of the interesting things is that William Grant Still, who is also from Little Rock, was the first black man to have his music performed by a major symphony. So these two Little Rock people were the two leading African American composers at the time. Quite an accomplishment for our little state."

Price died in 1953 nearly forgotten, Greeson says, but it wasn't due to her lack of musical talent.

"She was writing music that was beautiful at a time when most people weren't," Greeson says. "Most of the music at that time was more adventurous, and Florence never got on that bus."

The Mullins Library of the University of Arkansas houses the largest collection of Price's music, letters and documents, and a resurgence of interest in the composer developed after a plethora of photos, scores and documents were found in an abandoned home just outside of Chicago in 2011, he says.

"This music has never been performed, or at least not for 60 years," he says. "This festival is not just about celebrating Price, but also these pieces that have just been left, forgotten for decades.

"Price was a remarkable woman, like no other," Greeson says. "Hopefully the symposium will highlight her and Eddie. He was a great guy. Everybody just loved him."

Print Headline: The Heart of Music