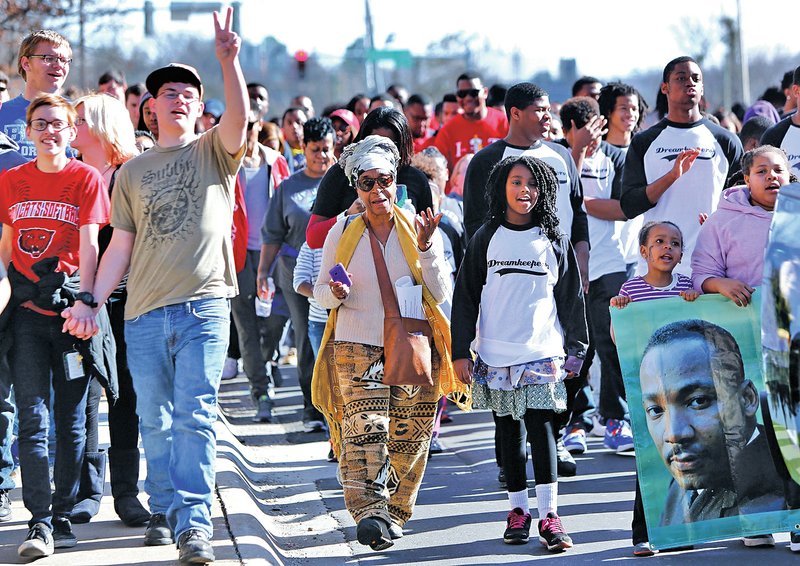 FAYETTEVILLE -- Hundreds marched through downtown to mark Martin Luther King Jr. Day with one repeated message: The push for civil rights isn't over.

Marchers in a column two blocks long made their way from Dickson Street to the University of Arkansas Union, singing "We Shall Overcome" and other marching hymns that kept time for demonstrations across the South in the 1950s and '60s. They were white, black and brown, young and old, and many said King's nonviolent struggles for desegregation and a voice for people of color 50 years ago must continue in the present day.

Some wore shirts or held signs emblazoned with the slogan "Black Lives Matter," shorthand for nationwide protests in the past several months, including one in Fayetteville last year, against deaths of black people at the hands of police in Missouri and elsewhere. Law enforcement officials involved in those protests say the deaths were justified, but protesters see a long-standing pattern of bias and violence.

"There's still injustice out there, social injustice," said Angela Mosley Monts, 57, who was passing out voter registration forms in the union after the march with her granddaughter, Areli Mayfield. Monts is vice president of the Northwest Arkansas Martin Luther King Jr. Council, which sponsored the march. "We need to teach our children how to march and how to protest, but do it in a nonviolent way."

Mosley-Monts was about her granddaughter's age 50 years ago when King and hundreds of others marched from Selma, Ala., to the state's capital in Montgomery to push for the Voting Rights Act of 1965. White Southern officials at the time often blocked black would-be voters from polls and juries with literacy tests, taxes and other violations of the 15th Amendment, which guarantees unhindered voting rights regardless of skin color.

Sheriff deputies and white residents met the Selma marchers with clouds of tear gas and sometimes deadly brutality. The events are dramatized in the movie Selma, out this month, but Mosley-Monts said she saw them unfold on TV.

"People died for us to be able to vote, and we need to exercise our rights," she said.

King, a Nobel Peace Prize winner, was shot down three years after the Selma march. His wife, Coretta Scott King, lobbied for a federal holiday in his name and continued promoting nonviolence, anti-war and anti-poverty efforts and other social justice issues until her death in 2006.

King died with his dream of equality only partly realized, said marcher Juana Washington of Fayetteville, who worried his message and tactics have been sanitized in the years since.

"His death wasn't just so we could have a cordial conversation like this," Washington said as the column moved up West Maple Street. "He talked about an end to racism, militarism and poverty. It was for these things that he was killed."

The keys to ending such problems are empathy and will, said Ella Lambey, 56, who led many of the marching songs with her alto voice and a megaphone at the front of the line.

Today's young people can and must take charge of the push for unity and equality, said State Rep. Eddie Armstrong, D-North Little Rock, who spoke to a gathering of hundreds of college students and marchers in Monday's post-march vigil. He said he hoped the students would take their education "to the corners of the world" and build bridges for future generations, as King did.

"The leaders of tomorrow are sitting here in this room," Armstrong said. "You have to take charge of the life that's in front of you, because if you don't, the bridges stop getting built."

The focus on education and young leaders continued Monday evening at the council's Recommitment Banquet. The council gave several awards, including $1,000 scholarships to about two dozen high school and college students, in between the evening's speeches and performances.

"Time is an un-reusable commodity," said Keith Jackson, a former professional football player from Little Rock and founder of a Little Rock after-school and summer program for children. Jackson was the banquet's keynote speaker. "This is your season, this is your time, and you need to find out what your purpose is."

Dan Holtmeyer can be reached at [email protected] and on Twitter @NWADanH.