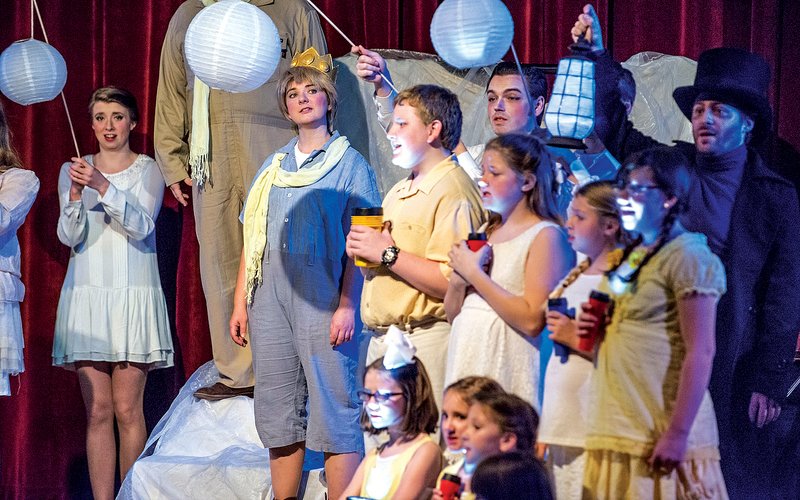 How do seasoned opera singers bond with pre-teen novices?

WHERE — Stella Boyle Smith Concert Hall at the University of Arkansas

"They're all having a great time," says Rachel Cornett, University of Arkansas Children's Choir master. "The adult opera singers interact with the kids and teach them along the way. It's wonderful to see."

Professional opera singers from around the country will join local children for the Opera Fayetteville production of "The Little Prince," an opera composed by Rachel Portman and based on the novel by Antoine de Saint-Exupery. The show will open at 7:30 p.m. today at the Stella Boyle Smith Concert Hall on the University of Arkansas campus.

The opera is conducted by Robert Muller, professor of music at the University of Arkansas and prize-winning composer, and directed by acclaimed opera director Stephanie Havey. An orchestra comprised of local musicians from the Symphony of Northwest Arkansas, the Arkansas Philharmonic and the Fort Smith and Tulsa symphonies will perform alongside the the opera stars.

And of course, with the kids.

About 20 members of the 100-person University of Arkansas Children's Choir are taking part in the production, and for many of these young performers, it is a debut.

"For a lot of these kids, this is the first time they will be on stage," Cornett says. "During rehearsals, they can't wait to see what will happen next. Because it's new for them. It's very refreshing."

Rehearsals for "The Little Prince" began in November, with staging taking place only two weeks ago, she says. With the short turn-around time, the young performers are learning the ropes quickly, taking cues from their professional counterparts.

"We have a total of 11 days of rehearsals," Cornett said. "We rehearse every day for at least three hours. Usually they will have a dinner break and then come back for three more hours. It is a lot of work, but the kids just eat it up. They can't wait for the next rehearsal."

But for the kids, it's more than simply learning some song and dance.

"At one point, the children have to engage in combat," Cornett says with a chuckle. "The director had to explain to them how to pretend to fight, that it's not actually shoving. And they are learning how to do stage makeup and being fitted and sized for costumes. These kids are learning the entire process along the way."

The children are responsible for a myriad of roles, she said, ranging from to lamplighters to desert stars to birds -- but it's their nature as children that brings out the personality in the roles.

"There is a point wherein the children are acting as birds and are singing about how they are flying," Cornett says. "Stephanie (Havey) had the kids running down the stage in rehearsal, acting like they were flying. She has asked them to play like children and then incorporated the action into what they were already doing. It's a very organic method."

The child actors wills serve as back-up singers in the opera, she says, which focuses on a pilot (Joshua DeVane) who finds himself stranded in the desert with a young boy he calls "the little prince" (Rose Sawvel). The two embark on a journey of friendship and discovery certain to delight young and old alike.

"This has been an amazing experience for the kids," Cornett says. "I think the audience will notice that these are not professional child performers, but it's very real. They're acting like kids playing kids. It makes it adorable."