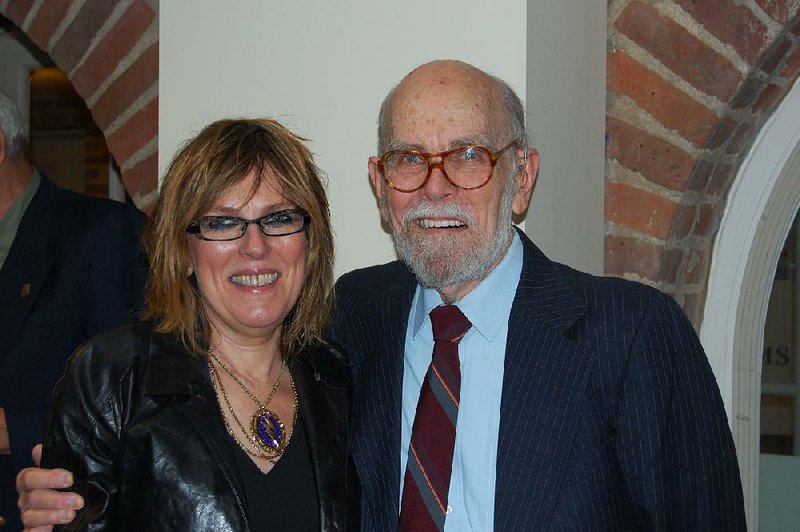 Lucinda Williams and her father, Miller

Williams, 84, was born in Hoxie and moved around as a child while his father worked as a Methodist minister, according to an Encyclopedia of Arkansas entry.

He graduated from Arkansas State College -- now Arkansas State University -- with a degree in biology in 1951 and published his first collection of poems in 1952, called Et Cetera.

Williams taught biology at several schools before getting a job in the Louisiana State University's English Department with the help of Flannery O'Connor in 1962, according to the Encyclopedia of Arkansas. He returned to Arkansas in 1970 to the University of Arkansas at Fayetteville.

In the decades that followed, Williams received numerous awards and published several more collections of poetry.

At the Clinton inauguration, Williams read "Of History and Hope," which he described in a 2013 Oxford American interview as a "consideration of how a look at a nation's past might help determine where it could be led in the future."

Williams married twice and had three children, including singer and songwriter Lucinda Williams.

"He was a wonderful teacher," said Linda Sheets, a friend of the Williams family, who was reached at the family's home. "He loved sharing what he knew about writing, and I learned a lot from him."

Williams edited a recent book project by Sheets about rescued animals, which she said was the last project he worked on as an editor.

A journalist once described Williams as the Hank Williams of U.S. poetry, according to the Encyclopedia of Arkansas.

Sheets said Miller Williams would have been delighted to know that he also died on the same day -- Jan. 1 -- that Hank Williams died in 1953.

A journalist at Arkansas Educational Television Network remarked in 2009 that Miller Williams' poetry was read in Ivy League schools but also enjoyed by squirrel hunters and taxi drivers.

"He wrote the kind of poetry that was deep but also easy to understand," Sheets said.