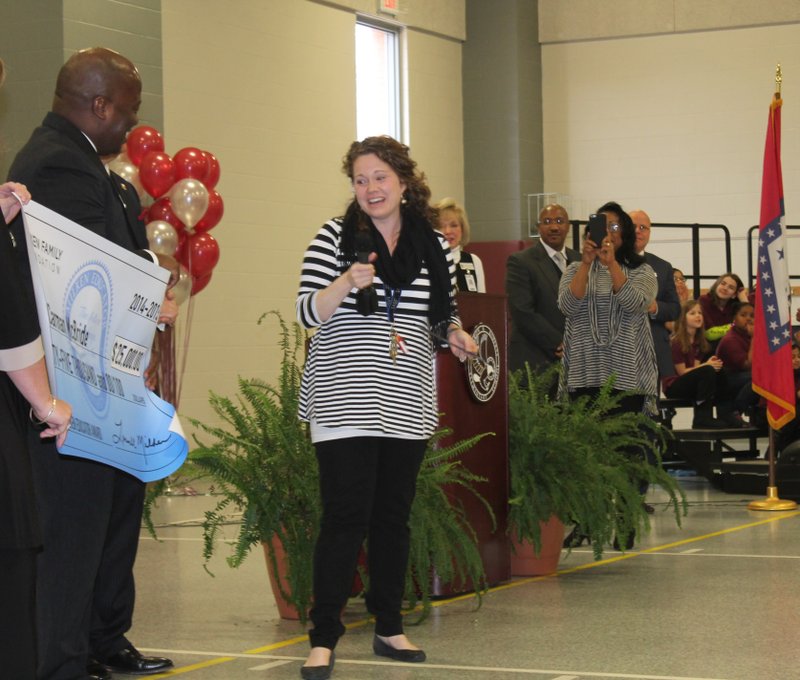 When Carman McBride arrived at work Thursday morning at Don R. Roberts Elementary School, she had no indication she would be going home with $25,000 and a national teaching award.

She filed into the school gymnasium with students and staff for what she believed to be a school assembly before the surprise announcement.

“This is unbelievable, I was thinking of all the people this could have gone to at this school. You guys are just unbelievable people and it’s amazing that I get to work here,” McBride said after being presented with the honor.

The award is part of a Milken Family Foundation initiative that honors top educators around the country.

McBride was a fourth-grade teacher at the school for three years, and now she heads the EAST program, which is an educational model that focuses on technology and student-driven service projects.

The EAST Initiative is a nonprofit organization funded by the Arkansas Department of Education along with public and private grants. Arkansas is among five states — the others are Iowa, Louisiana, Oklahoma and Pennsylvania — that have adopted the EAST model, which was established in 1996.

“This is a representation of the excellence at Roberts Elementary School,“ he said. “Consider this particular person as the poster child for the excellence that is going on here.”

Since the Milken Family Foundation started the program in 1987, it has awarded more than $65 million to more than 2,600 top educators across the nation, including more than 70 Arkansans since 1991.