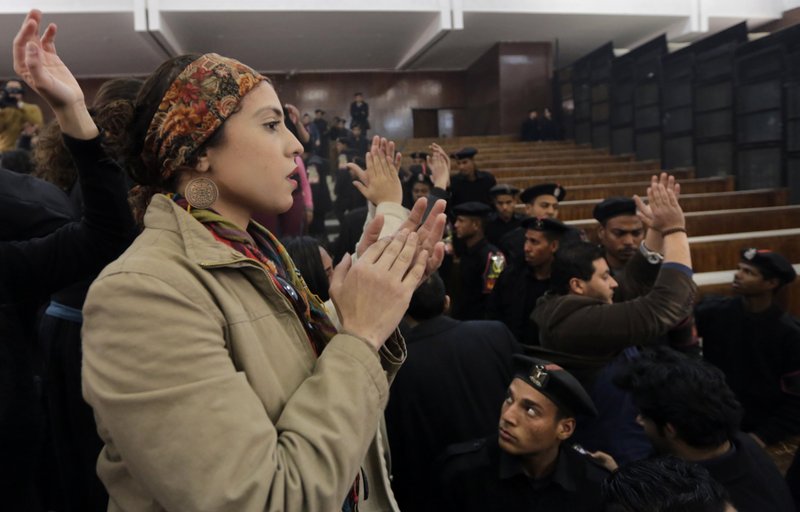 Supporters of 21 activists on trial stand on wooden benches chanting, Down with military rule, after they were sentenced to prison terms over an unauthorized street protest in 2013, in a Cairo court, Egypt, Monday, Feb. 23, 2015. The court sentenced Alaa Abd el-Fattah, an icon of the country's 2011 revolt to five years in prison Monday, showing authorities' determination to continue to stifle dissent despite promises by its president to release "wrongly jailed youths." Another defendant, Ahmed Abdel Rahman, was also given five years. The others were sentenced to three years. - Photo by AP / AMR NABIL

CAIRO -- A prominent Egyptian activist behind the 2011 uprising was sentenced to five years in prison on Monday over an unauthorized but peaceful protest.

The verdict in the retrial of activist Alaa Abdel-Fattah reduced an earlier 15-year prison sentence for organizing and taking part in an unauthorized protest and for reportedly assaulting a police officer. Monday's ruling by Judge Hassan Farid was condemned by defense lawyers and supporters, who said Abdel-Fattah should have been set free.

Earlier in the same Cairo court, the judge postponed until March 8 hearings in the retrial of two Al-Jazeera English journalists who face terror-related charges in a case widely criticized by human-rights organizations and media groups.

His decision followed a brief hearing for acting bureau chief Mohamed Fahmy and producer Baher Mohammed. They were freed this month to await trial, though they've had to check in with police daily.

The two, arrested in December 2013, face charges of being part of a terrorist group and airing falsified footage intended to damage Egyptian national security. Satellite news network Al-Jazeera is based in Qatar, which was the main backer of ousted Islamist President Mohammed Morsi and his Muslim Brotherhood. A third Al-Jazeera journalist convicted in the same case, Australian Peter Greste, was deported Feb. 1 after more than a year in prison.

Fahmy, who has Canadian citizenship, gave up his Egyptian nationality in hopes of being similarly deported. It is not clear why authorities have not allowed him to leave the country.

"Canada continues to call for the immediate and full release of Mohamed Fahmy. The prospect of Mr. Fahmy continuing to stand retrial is unacceptable, and Canada advocates for the same treatment of Mr. Fahmy as other foreign nationals have received," Canadian Minister of State for Consular Affairs Lynne Yelich said Monday.

Abdel-Fattah's retrial began in October and involved 25 defendants, five of whom are fugitives. One other defendant received a five-year prison sentence, while the rest got three years.

Farid ordered that all the defendants be placed under police surveillance after their release for a period similar to their prison terms.

The court "didn't take into consideration any of the evidence that showed the defendants' innocence," he said.

Lawyers said they will appeal the ruling to Egypt's Court of Cassation, the country's highest appeals court.

In a brief address before he delivered the verdict, Farid insisted the ruling was "free of any interference or caprices." Egyptian officials insist the judiciary is independent and does not rule based on political considerations.

An outspoken blogger, Abdel-Fattah has been in and out of prison in the years since the 2011 ouster of autocrat Hosni Mubarak. He campaigned for democracy and against the policies of the military council that ruled Egypt for nearly 17 months after Mubarak's ouster.

He also opposed Islamist President Mohammed Morsi, whom the military overthrew in 2013, and is critical of his successor, Abdel-Fattah el-Sissi.

The charges against the activist stem from a law prohibiting protests without government permission, a measure adopted a few months after Morsi's July 2013 overthrow.

"I know of no other country in the world that jails young people for three or five years for taking part in peaceful protests," said Khaled Dawoud, spokesman for the Dostour party, of which two members were sentenced to three years in prison.

Abdel-Fattah was accused of inciting an "unauthorized" demonstration Nov. 26, 2013. That demonstration was called to protest a clause allowing military trials for civilians in the draft of a new constitution, which was later adopted in a referendum.

Mona Seif, Abdel-Fattah's sister and one of the organizers of the protest, said Abdel-Fattah attended the demonstration but that he hadn't organized it.

Police violently dispersed the protest, and about a dozen women, including Seif, were detained by police and dropped off in the middle of the desert outside Cairo later that night.

Monday's ruling comes a day after el-Sissi promised to release youths who were wrongly arrested. Figures like Abdel-Fattah will likely remain in detention, but authorities may release youths rounded up at demonstrations but not yet charged. Rights groups say there are more than 20,000 people behind bars in Egypt, mostly Islamists.