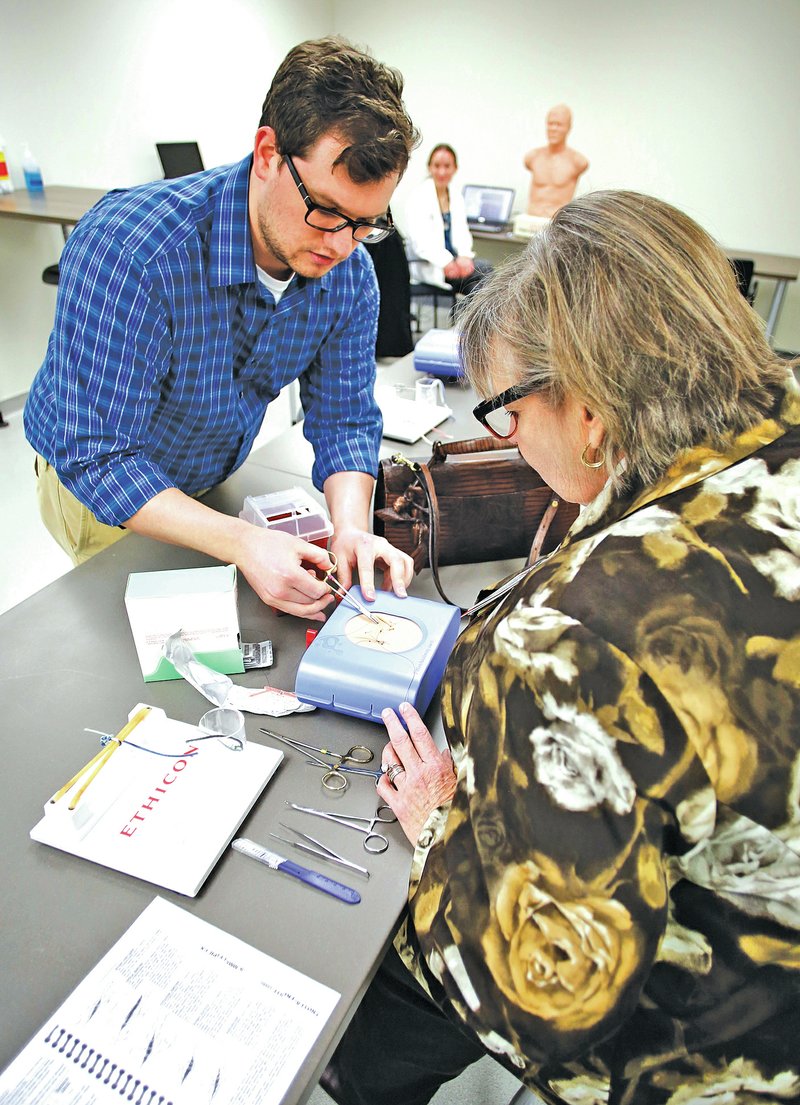 NWA Democrat-Gazette/DAVID GOTTSCHALK Clark Trapp, a fourth-year medical student at University of Arkansas for Medical Sciences Northwest, demonstrates a suture Thursday to Donna Norvell Smith, director of development with the College of Health Professions, at the Pat and Willard Walker Student Clinical Education Center on the Fayetteville campus.

FAYETTEVILLE -- The first University of Arkansas for Medical Sciences program to be based in Northwest Arkansas expects to have 75 prospective physical therapy students visit for interviews next week, an official said Thursday.

"Building this program is a $3 million start-up," said John Jefferson, chairman of the new UAMS physical therapy department, at a ceremony announcing the naming of the Schmieding Neurological Skills Lab after a $100,000 pledge from the Schmieding Foundation. "And it will be -- once all our students are here -- supported without state funds due to the philanthropy in the region and tuition dollars from the students."

The first class of 24 students will enroll in August to begin a three-year clinical doctoral program in physical therapy. UAMS opened a physical therapy clinic in October seeing about 35 patients daily, according to occupational therapist Kandy Salter.

Students will help out at the clinic, Jefferson said, adding renovations to create student lab areas and offices for faculty are a month ahead of schedule. Jefferson said about two-thirds of the $3 million has been raised so far by UAMS.

The Schmieding Foundation money will pay for an array of lab equipment, Jefferson said.

The gift will allow UAMS to "supply this space with everything we need to help movement disorders across a lifespan," he added.

The UAMS Northwest regional campus, which opened in 2007, has had 680 graduates in fields such as medicine, nursing and pharmacy, Peter Kohler, vice chancellor for UAMS Northwest, said at the ceremony.

"The campus here was really designed to alleviate the workforce problems of health care that the whole state and nation are facing," Kohler said.

Of the applicants, "most of them are coming within a 100-mile radius of Fayetteville and Rogers," Jefferson said.