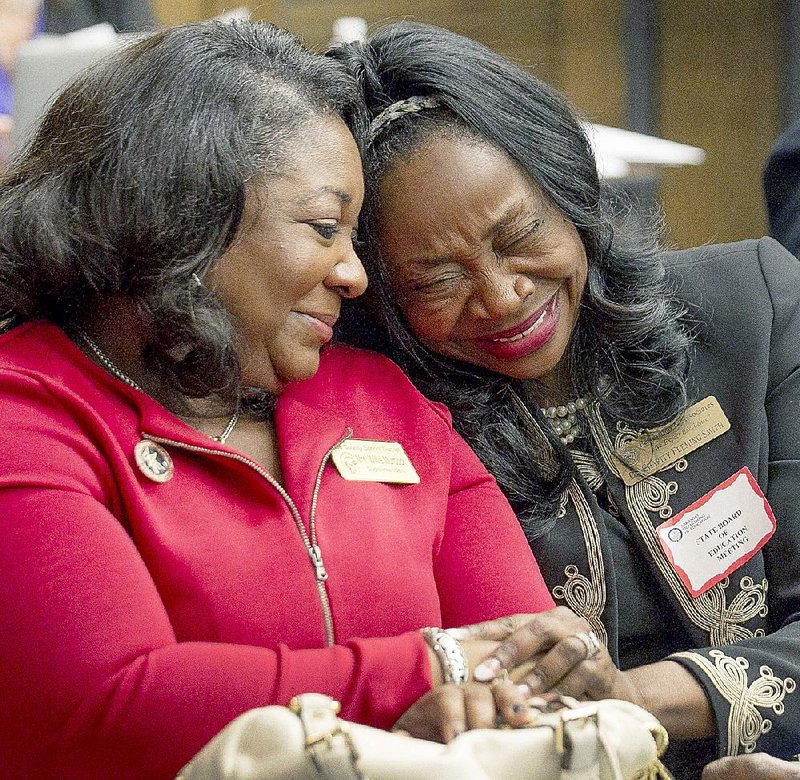 Lee County School District Superintendent Willie Murdock (left) is congratulated by Charity Fleming Smith after the state Board of Education voted to remove the district from the academic distress list.

The Lee County and Strong-Huttig school districts are no longer labeled by the state as "academically distressed," clearing the way for the release of the Lee County district from state control.

The Arkansas Board of Education on Thursday removed the academically distressed classifications from the two districts and six schools based on the last three years of state test results. In each case, the districts and schools showed improvement -- better than 49.5 percent of their students scored at proficient levels on state math and literacy exams from 2012 through 2014.

Also on Thursday, the Education Board classified 22 schools as academically distressed based on the same test data. Several of the 22 schools are repeated from last year's list because fewer than 49.5 percent of their students scored at proficient levels on the Benchmark and End of Course exams over three years.

The list also includes three each in Pine Bluff and Forrest City, and two in Blytheville. The other labeled campuses are in Dermott, Dollarway, Helena-West Helena, Strong-Huttig and Watson Chapel school districts. Covenant Keepers Charter School in Little Rock is also on the list.

Willie Murdock, superintendent of the Lee County School District, said after the state Education Board meeting that she was delighted about losing the distress label. She said her 827-student district now has the possibility of "getting our voice back" in the form of a locally elected school board.

Education Board members asked that the Lee County district's possible release from state control be placed on the agenda for their March meeting, along with reports on the district's finances and its compliance with state accreditation standards.

The Marianna-based district was taken over by the state in April 2014 for academic distress, but it is also classified as fiscally distressed and in violation of accreditation standards.

The Education Board last year removed the Lee County School Board and put Murdock under the direction of the state education commissioner because of chronic low achievement in the district. State board members found that the poor achievement was at least partially the result of the district's lack of a curriculum. The district relied solely on textbooks for determining what to teach.

State Education Board member Jay Barth of Little Rock said he was concerned about releasing Lee County from state supervision Thursday without assurances that the district was in solid fiscal condition.

"We don't want to jerk the community around," he said.

Board Chairman Sam Ledbetter of Little Rock agreed on the need for the financial report, saying that a move to immediately release the district was not on the board's agenda Thursday and "seemed hurried."

"I'd like to get some understanding ... so we have confidence that they are on the right track."

Board member Vicki Saviers of Little Rock questioned Andrew Tolbert, the director of the Education Department's Office of Intensive Support that assists academically and fiscally distressed school districts, on whether he felt the district was prepared for release.

Tolbert responded positively, saying that the district had become receptive to assistance, had improved its communication with the community, and demonstrated coordination of services and resources. He also said the district is operating under a six-month action plan for the remainder of the school year and is working with an outside consultant to assist them with academic plans.

The district also would continue to receive state assistance for fiscal distress even when released from academic distress, Tolbert said.

Board member Diane Zook of Melbourne pointed out that the state Education Department, through its school improvement division and the Office of Intensive Support, has helped schools and districts get off the academically distressed list.

That is contrary to accusations made by some Little Rock community members last month who said the state lacked any record of success in turning around academically troubled schools, Zook said. The state took over the Little Rock School District on Jan. 28.

"I commend the [Arkansas Department of Education] because you do in fact have a record of helping districts get out from under academic distress," Zook said.

Ledbetter said that was the case even though the state has made the standard for distress more stringent than it was in the 1990s.

"We are expecting more and getting better results," Ledbetter said.

On Thursday, the board tabled any decision on classifying alternative-education centers as being in academic distress even though they qualified for the designation. Education Commissioner Tony Wood said his staff will ask the Legislature to alter the requirement that alternative education centers be classified as distressed when their purpose is to provide services to students who are not successful in regular schools.

Benny Gooden, superintendent of the Fort Smith School District, told the board that his district could close its alternative-education center but that wouldn't be in the best interest of the students, many of whom come from dysfunctional homes or have been in legal trouble or have substance-abuse issues.

He said 42 of 52 students in the program last year earned their General Educational Development certificates, a feat he called miraculous.

The board rejected an appeal by the Blytheville School District against the classification of the district's middle school as academically distressed. District leaders said the district reorganized its schools, adding sixth-graders and alternative-education students to the middle school.

That resulted in the school falling under the thresholdfor academic distress. District leaders said there were at least six students who moved into the school after the Oct. 1 cutoff for being counted as part of the tested group of students.

Annette Barnes, the Education Department's assistant commissioner for public school accountability, said the Blytheville district failed to ask for corrections to their count of highly mobilestudents during the 32-day window for those corrections.