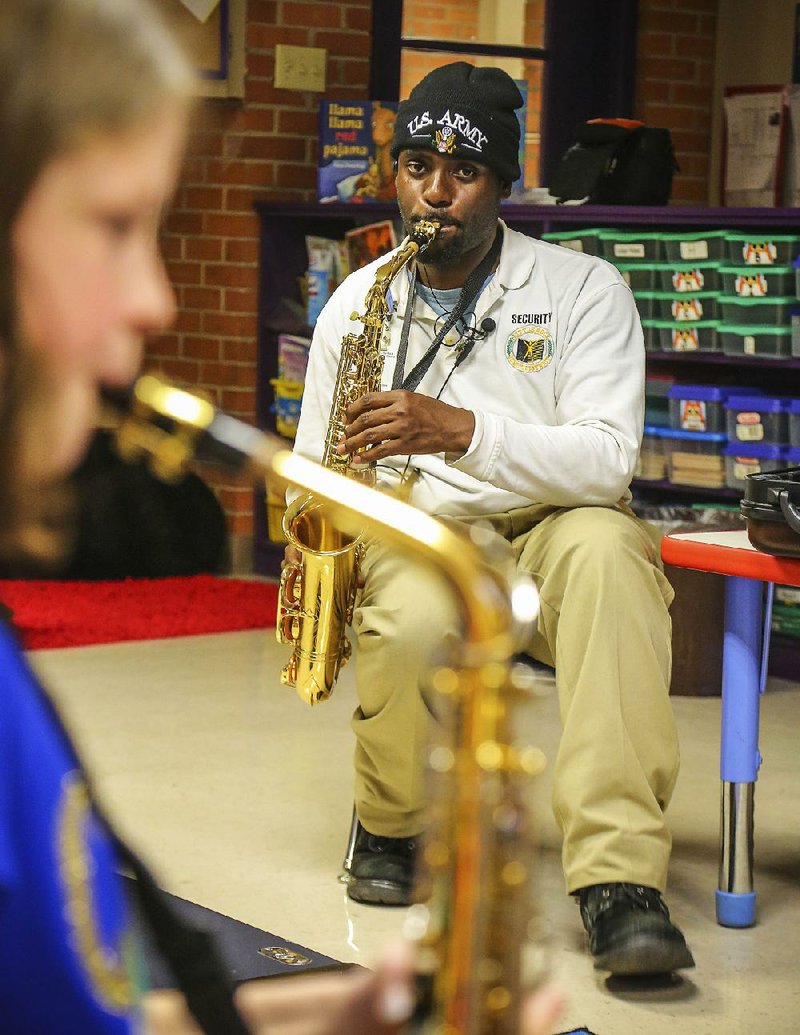 12/4/2014 Arkansas Democrat-Gazette/STEPHEN B. THORNTON Little Rock School District security officer Chad Henson, plays notes with Thomas Jefferson Elementary school students in an after-school training session in a classroom at the school last December. Henson wanted to share his love of music, specifically the saxophone, with students at his school. The school didn't own or teach the saxophone so Henson reached out to the non-profit Art Porter Music Education (APME) for help. APME teamed up with North Little Rock's Saied Music Company to loan 4 instruments to the school and Henson volunteered to tutor the students after school.

At the end of the school day, Little Rock School District security guard Chad Henson takes on another role, that of teacher. Henson shares his love of music with a small group of children at the school he protects, Thomas Jefferson Elementary.

Henson says the shininess of the saxophone first drew him to it. But soon he discovered the reed instrument's power as a tool for expelling childhood frustrations.

After his mother drove to Conway to pick up his first saxophone, things changed. "I would go out to a park somewhere and I'd just play and play hard, and play extremely loud and think that I'm going to be getting on somebody's nerves really soon. But I'd be done. I felt like I said my piece to the world. ... I finally have a way to express my frustration."

It took him a while to realize what he had until he performed at a church, his first solo. He hadn't been playing for very long as he took the stage to play "some cheesy little song."

"This is what made all the difference, some lady put $5 in my hand," as he came off the stage. "I said, 'Oh snap, five dollars.' That right there made me want to say, 'How much further can I take this?"

He started practicing more and playing wherever he could: "I've been taking the saxophone and the craft of music with me ever since."

Henson, 28, even packed his sax along on a 15-month tour of duty in Iraq in 2008. He would play for himself, other soldiers and at banquets and prayer breakfasts.

Walking school halls for the past 2 1/2 years, Henson could see his childhood self on the faces of some of the children. He knew he had a small gift he could share with them, the joy of music. The school didn't own saxophones, but administrators took Henson's dream to teach and reached out to Art Porter Music Education for help. The organization, in turn, teamed up with Saied Music Co. in North Little Rock to provide four instruments to the school in November.

Henson knew those shiny horns would attract much attention from too many pupils,

so he required hopefuls to write essays to prove their dedication and earn a spot in the class. Now Henson volunteers an hour a week after school to train four children, with the idea that they will play assemblies in front of the school soon.

He hesitates to call himself a teacher: "As far as what I'm doing I feel like it's an honor and a privilege to be able to show them and teach them what I know. Not only do I hope they gain some useful knowledge in being able to play the saxophone, but I hope they realize how much power they have at their fingertips."

His first tutoring session with the kids dealt with handling and respecting the expensive instrument. But he was anxious to hear it -- the first squeaky, off-key notes followed by the giggles of youth.

"You guys are on the start of something great," Henson says. "A lot of times even kids in middle school can't get their first note out of their saxophone. Each and every last one of you proved that I knew what I was talking about, OK, and I'm proud of you.

"You all played a note, you played it smoothly and perfectly and we're going to keep going from here."

Print Headline: A friend in reed/School security guard stays overtime to share the gift of music