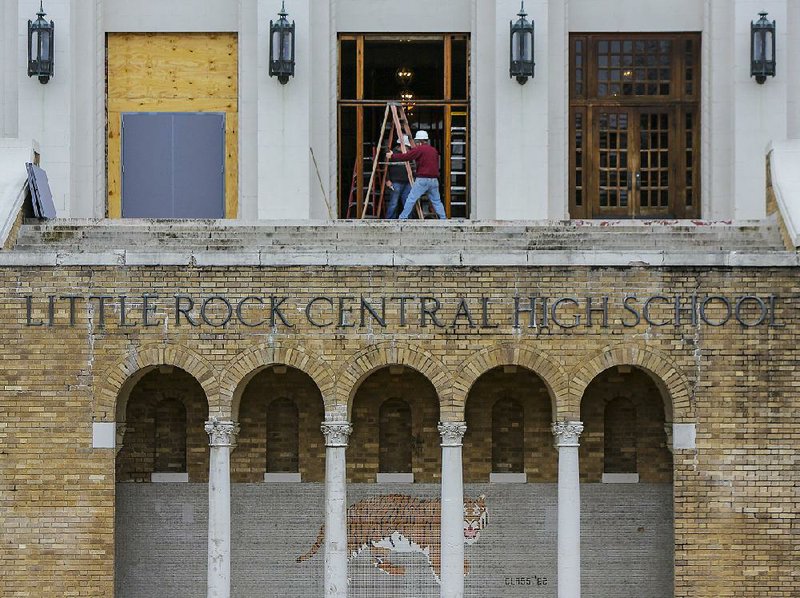 Construction crews remove one of the three sets of doors from the front of Little Rock Central High School on Tuesday morning. Temporary doors (left) will fill in while the original doors undergo renovation in Kansas City, Mo.

The oak-and-glass front doors of Little Rock Central High School -- which in 1957 were first closed and then opened to nine black teenagers seeking to racially integrate the formerly all-white high school -- are being removed this week for repair and restoration in Kansas City, Mo. 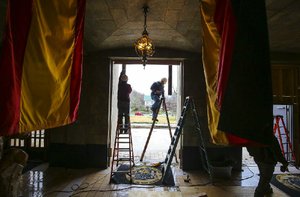 Photo by Stephen B. Thornton
Glen Burks (left) and Chad Louk work to remove one of the three sets of doors from the front of Little Rock Central High School on Tuesday morning. 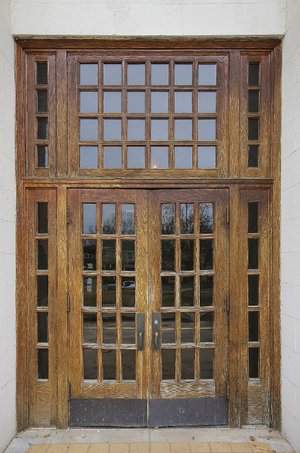 Photo by Stephen B. Thornton
One of the three sets of doors await removal from the front of Little Rock Central High School on Tuesday morning. Temporary doors will fill in while the original doors are refurbished.

The three sets of double doors, along with the transom windows above the doors, the sidelights and the arched windows that cap the doors, constitute the grand, main entrance to the landmark school that opened in 1927.

Now, nearly 90 years old -- and having served as the backdrop to a milestone in civil-rights history and to subsequent commemorative ceremonies -- the oak doors and wood stops for the window panes have taken all the student traffic and Arkansas weather they can stand.

"Cracked" and "brittle" are words that Central High's longtime principal, Nancy Rousseau, uses to describe the condition of the historic doors.

Rousseau on Tuesday recalled a time about a year ago when she found a little strip of wood on the ground after a fire drill.

"I saw it lying there and I said, 'Oh my gosh, this is from the door!' I [glued] it back and reached out to the National Park Service for assistance. Another piece fell when that group came. They pasted that piece back up also. That's when I said 'What are we going to do? This is really scaring me!'"

Central High, a school for about 2,400 students, has been a National Park Service national historic site since 1998. Faced with the deteriorating front doors, the Park Service brought in its experts to evaluate the doors and windows. The Little Rock School District, WER Architects/Planners, and Kinco Constructors also are involved.

Ultimately, the National Park Service made available $75,000 for the restoration project, and the Little Rock School District has provided an equal match for the $150,000 project, Rousseau said.

As a result, the three sets of double doors and all the windows are being taken apart piece by piece, labeled, and crated this week to be shipped to Kansas City, Mo., to be repaired and restored over the next three to four months by Re-View, a window and door restoration company that specializes in large projects and landmarks.

To do anything but restore the original windows and doors would be "a sacrilege," Rousseau said.

Those original doors and windows "have really taken a beating being on that east side with the sun and rain," Steven St. John, construction manager for the Little Rock district said. "If we had waited another year we probably would have lost them."

John Greer Jr., a principal in the WER architecture firm agreed: "It's a wonder the doors lasted as long as they did."

Much of the original wood and glass materials that make up the doors and windows will be reused, Greer said.

However, 5 to 10 percent of the materials will have to be re-created because they are damaged.

To do that re-creating, some old-style woodworking will be necessary by the Kansas City company.

"One of the things that is unique and special about these doors is that they have a separate layer, like a veneer layer but it is thicker than what most people would think about a veneer," Greer said. "Most veneers are kind of thin. This is a thicker layer on the outside and that is what is damaged. It has sort of sacrificed itself, but the inner wood is in great shape."

The craftsmen will be removing that damaged veneer layer and milling a replacement to put back in its place, he said..

The glass in the windows and doors is also being salvaged.

"New glass and historic glass look a little different, so we are trying not to damage that in the process," Greer said about the original glass.

There are dozens of window panes that make up the doors, the transom windows, the sidelights and the arched windows. Each one of the panes of glass is surrounded by four separate pieces of wood,or "stops."

As a result there are thousands of pieces to these doors and windows, Greer said.

The Kansas City craftsmen will restore all the pieces and then put the doors and windows back together in their shop, Greer said. Once they are satisfied with the work and how the windows look, they will disassemble them for shipping back to Little Rock.

In Little Rock, the parts of the doors and windows that have lost their protective finishes will be sanded down and re-stained and a new polyurethane finish that has ultra violet light prohibitors in it will be applied. That will help protect the wood from damaging rays and give the doors and windows a longer life.

"We have two goals," Greer said about the Central project. "One is to keep as much of the original as possible and reuse it. The second goal was to provide something that would not be maintenance free but would be low maintenance and could be maintained for a long time."

"It's been a long ride," Rousseau said Tuesday about the efforts just to reach the point this week of removing the original doors and windows and replacing them with temporary fixtures.

She said the temporary doors and windows are hard to look at. She regrets that passers-by and visitors to the historic school over the next several weeks won't be able to photograph the school's front in all of its true grandeur.

On the inside, the temporary, solid doors make the school's once light and airy foyer very dark. Only the pieces of plywood covering the spaces for the arched windows above the doors have little windows cut into them to give a little natural light into the third floor classroom behind those windows spaces.

"It's going to be tough for a while," Rousseau said, but adding that the repairs to the doors and windows will be worth it.

"They will be beautiful when they come back," she said.