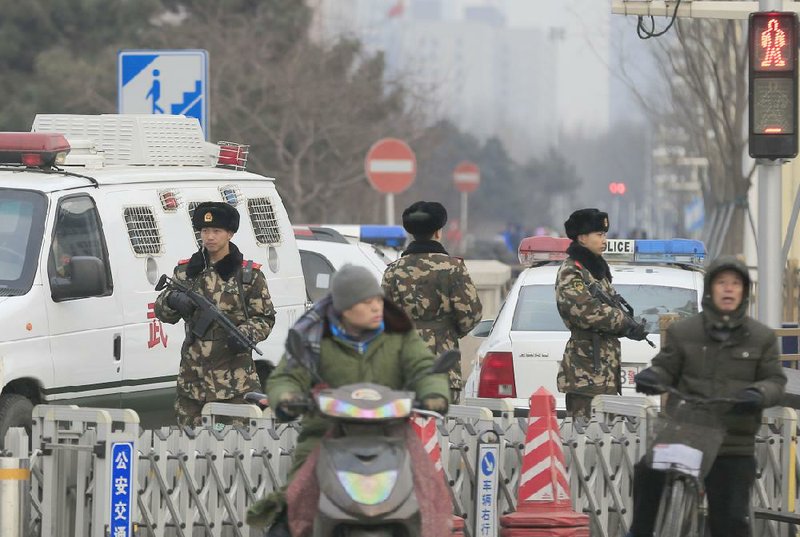 Chinese paramilitary police stand guard in the popular shopping and tourist area of Wangfujing in the capital city, Beijing, on Sunday.

BEIJING -- China's legislature on Sunday approved the country's first anti-terrorism law, despite criticism of its requirements that tech companies share information with the government. 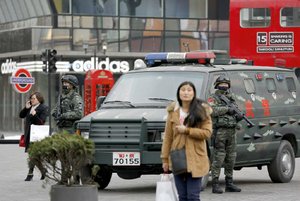 The National People's Congress said its standing committee adopted the law with a unanimous vote. The law goes into effect Friday.

Rights advocates and foreign governments, including Washington, have expressed concerns about the law's likely effect on tech businesses and freedom of speech. They countered that the new powers could be abused to monitor peaceful citizens and steal technological secrets.

Chinese officials said Sunday that the requirements for the tech firms are necessary because terrorists are increasingly turning to cyberspace.

They said lawmakers balanced the need to fight terrorism and the need to protect business interests and public rights.

"Relevant regulations in the anti-terrorism law will not affect the normal business operation of companies, and we do not use the law to set up 'back doors' to violate the intellectual property rights of companies," said Li Shouwei of the National People's Congress Standing Committee's legislative affairs commission.

"The law will not damage people's freedom of speech or religion," said Li, a criminal law expert.

Beijing has asserted that China is a victim of global terrorism after violent ethnic clashes involving members of the Uighur minority group, who are predominantly Muslim, in the far northwest region of Xinjiang. Foreign experts, however, have argued that there is no proof of foreign ties and that the violence in Xinjiang might be homegrown.

Xinjiang, which is home to a large population of Uighurs, has long been troubled by violence blamed by the government on militant separatists. Human-rights advocates say China's efforts to clamp down on perceived separatism has helped radicalize the Uighur minority group.

At least 50 people were killed after a group of men attacked a coal mine in Xinjiang, Radio Free Asia reported in October, citing local security officials. Knife-wielding assailants killed 29 people at a train station in the southern city of Kunming in March last year.

China has criticized the West for adopting double standards when it comes to anti-terrorism efforts. Beijing recently refused to renew the press credentials of a French journalist, effectively expelling her, for questioning Beijing's linking of ethnic conflicts with global terrorism.

Critics had said the draft version of the law used a recklessly broad definition of terrorism, gave the government new censorship powers and authorized state access to sensitive commercial data.

They assert that it is troublesome that telecommunications companies and Internet service providers are required to share encryption keys and back-door access with the police and state security agents seeking to prevent terrorist activities or investigating terror acts.

Human-rights groups have warned that the new law will give even more intrusive powers to the Chinese government, which already has virtually unchecked authority to monitor and detain citizens and to demand information from companies and Internet services.

"While the Chinese authorities do have a legitimate duty in safeguarding their citizens from violent attacks, passing this law will have some negative repercussions for human rights," William Nee, a Hong Kong-based researcher on China for Amnesty International, said in emailed comments.

"Essentially, this law could give the authorities even more tools in censoring unwelcome information and crafting their own narrative in how the 'war on terror' is being waged," Nee said.

The final draft of the law defined terrorism as "advocacy or actions of using violence, sabotage, threats and other means to create social panic and endanger public safety and to violate persons and property, or to coerce state organs and international organizations, in order to achieve political, ideological and other goals," Xinhua, the official news agency, reported Dec. 21.

International companies that use encrypted technology in China had been worried by provisions in the earlier draft that would have required them to hand over code and other information so authorities could monitor users. That could affect multinational companies like Cisco, IBM and Apple, all of which have stakes in China.

"These companies have been dealing with this increased, let's call it oversight, for the last two or three years," said Scott Livingston, a lawyer who works for Simone IP Services, a consulting firm in Hong Kong, and who has kept up with the discussions over the law. If the anti-terrorism law's requirements remained the same as in the earlier draft, Livingston said, "from the government's perspective, you have a stronger basis to request this access."

In January, foreign business groups wrote to President Xi Jinping to voice collective unease about China's Internet policies, including the draft legislation, which could have required handing over sensitive data and commercial secrets.

In an interview with Reuters in early March, U.S. President Barack Obama criticized the proposed legislation and similar initiatives by the Chinese government.

The proposed rules "would essentially force all foreign companies, including U.S. companies, to turn over to the Chinese government mechanisms where they could snoop and keep track of all the users of those services," Obama said. "Tech companies are not going to be willing to do that."

A few days before the anti-terrorism law passed, Hong Lei, a spokesman for China's Ministry of Foreign Affairs, told a regular news briefing that criticism from the Obama administration was unfounded.

Li, the criminal law expert with the National People's Congress, insisted that the new law was no reason for multinational companies to be alarmed.

"These rules will not affect the ordinary business activities of the firms concerned," he said.

Also on Sunday, the legislature approved legal changes to put in place China's new policy, announced in late October, allowing all married couples to have two children, replacing the decades-old rule that restricted most urban couples to one child. The two-child rule will take effect Friday.

Information for this article was contributed by staff members of The Associated Press; by Zhang Dingmin, Bei Hu and Jing Jin of Bloomberg News; and by Chris Buckley of The New York Times.