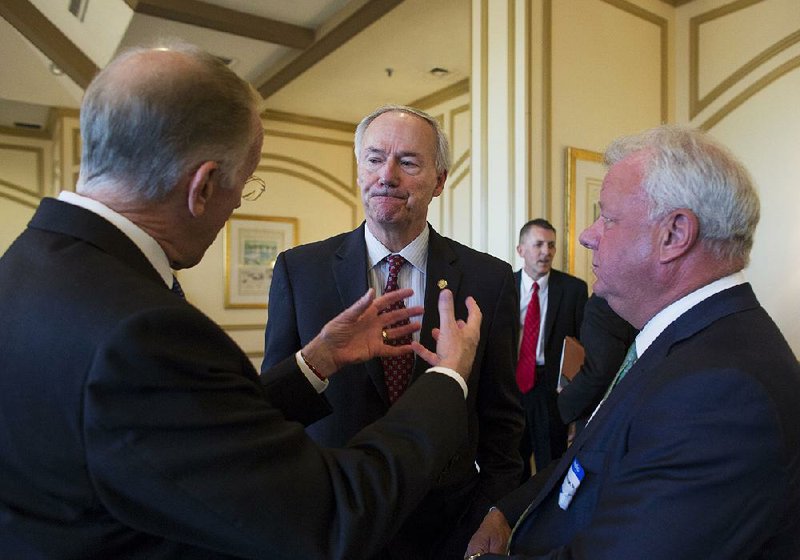 Governor Asa Hutchinson speaks to supporters gathered to hear the announcement of a partnership with non profit and nonpartisan organization Arkansas Policy Foundation December 17, 2015 at the Little Rock Club. Hutchinson said the Cuban government has ordered 4,500 tons of poultry from Arkansas companies to be shipped in January.

Tyson Foods and Simmons Foods will resume trade with Cuba after an outbreak of bird flu earlier this year caused the country to ban poultry from Arkansas.

Gov. Asa Hutchinson said the Cuban government has ordered 4,500 tons of poultry from Arkansas companies to be shipped in January. Hutchinson led a three-day trade mission to Havana in September.

"Because of our trip we got this success story of the poultry contract," Hutchinson said. "It's an 11 million-person market there that we have not accessed before, and they love poultry."

Countries that have banned U.S. poultry, including Cuba, drove down profits in the poultry industry this year.

U.S. poultry and egg exports for the first half of 2015 fell by 14 percent, down $386.3 million to $2.4 billion from the same period last year, according to data compiled by the Foreign Agricultural Services.

That's the largest drop in export value for the first half of year, according to a report by the U.S. Poultry and Egg Council.

Most bans on U.S. and Arkansas poultry have been lifted since the outbreak earlier this year. Jim Sumner, president of the Poultry and Egg Export Council, said the most costly ban that remains is China's, which bars poultry from anywhere in the country.

For Arkansas, the biggest remaining challenge is Mexico.

Mexico, the top importer of U.S. chicken and turkey, has banned poultry from states that were affected by the outbreak, including Arkansas.

Sumner said Mexican delegates are planning a trip to Arkansas and California in January to see how the states responded to and are preparing for another bird flu outbreak.

"We are hopeful that after that visit they will lift the ban on Arkansas, as well," he said.

He said the broiler industry has been suffering the consequences brought about by other related commodities.

"The restrictions that have affected the broiler industry are the result of problems that occurred in the turkey and egg industry," he said.

In Arkansas, the only case of bird flu was from a commercial turkey farm in Boone County, but export bans usually include broilers and all other poultry.

With confidence in U.S. poultry shaky after bird flu, the industry is targeting areas that are poised for growth. Sumner said he and other industry leaders are in the process of getting South Africa and South Korea to lift their export bans.

"We expect Cuba to be a market that's going to continue to grow and should be very important for the U.S. poultry industry," he said.

A year ago President Barack Obama asked Congress to lift the embargo on Cuban trade. Hutchinson has said that this would help Arkansas poultry sales in the cash-strapped country.

"Just imagine what we could do if they lifted the credit terms," Hutchinson said. "It's a matter of supporting our industries that are so strong here."

Most of the exported chicken in the Cuba deal will be coming from Simmons. The order, which includes 3,000 tons of frozen chicken legs, will leave for Cuba in early January, said Simmons spokesman Donny Epp.

Mark Simmons, chairman of Simmons Foods, joined Hutchinson on the trip to Cuba earlier this year.

"We are very thankful for the leadership in our state, and Gov. Hutchinson, has has shown in working to open this market," said Mark Simmons, chairman of Simmons. "We are certainly excited about this new opportunity."

Some agricultural companies, including Tyson, traded with Cuba before bird flu shut the country's border to poultry.

"We're glad Cuba has lifted its ban on Arkansas poultry products and applaud Gov. Hutchinson for his work to help get it done," company spokesman Worth Sparkman said. "Export markets like Cuba are important to the poultry industry and especially to states like Arkansas."