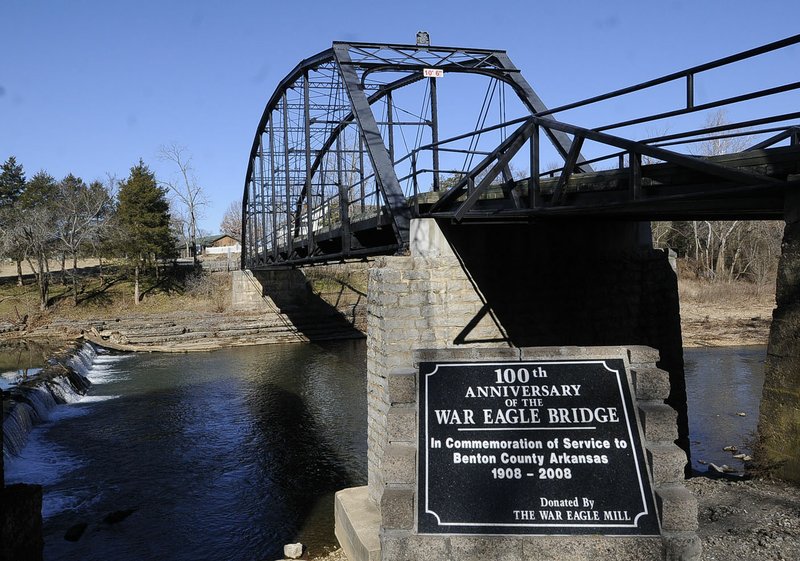 The War Eagle Bridge is an historic Benton County landmark and a centerpiece of the War Eagle community. Officials have been studying how to repair the bridge.

BENTONVILLE -- Benton County officials are still sorting information on the historic War Eagle Bridge, but a preliminary report from Great River Engineering has boosted hopes the bridge can be saved. 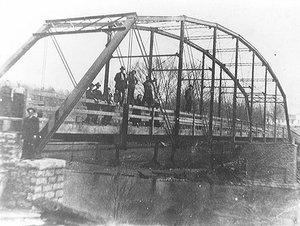 Photo by Courtesy Photo/ROGERS HISTORICAL MUSEUM
The War Eagle Bridge shown in about 1910.

"We had a good discussion with Great River," said County Judge Bob Clinard. "It can be fixed and returned to at least minimal use for light traffic."

Built by the Illinois Steel Bridge Co. in 1907, the War Eagle Bridge is significant as one of six Parker through trusses in Arkansas. The bridge is next to a reconstructed grist mill, which is fourth in a series of mills on the same site dating back to 1832.

Pat Adams, justice of the peace for District 6 and chairman of the Transportation Committee, was also pleased with the report on the bridge. Adams said he wants the county to get detailed design work done and a cost estimate to do the repair.

These are engineers' estimates, Adams said of the potential costs offered by Great River. The company's initial report shows three options for work on the bridge. Option A has an estimated cost of $711,837. Option B has a price tag of $870,813 and option C, the full plan for repair, carries a cost estimate of $1.01 million.

The county advertised nationally for engineering firms with expertise in similar bridge projects. Great River Engineering was selected from the three responses. The firm was asked to work with the Arkansas Highway and Transportation Department to determine an acceptable weight limit and develop preliminary plans for repair and cost.

The first phase of work, which produced the initial report, cost $35,000. Design work in the second phase is expected to take about a year and cost $78,000. The project could be completed in the summer of 2017 if the county decides to do the work recommended.

The county has considered what to do with the bridge, built in 1907, for several months. The county spent more than $640,000 on repair in 2010, but inspection reports from the Highway Department in 2013 identified several critical deficiencies and a number of structural problems.

The county has reduced the bridge's posted weight limit to 3 tons while it considers what to do with it. A majority of the more than 100 residents who turned out for a meeting in February supported keeping the bridge in place and open for vehicles.

Adams said he plans to push for option C, which is the full repair. He said work could keep the bridge open for another 20 years and give the county time to consider a long-term alternative.

"I think, in the long-range planning, it takes four or five years to replace a bridge. I want to have five to eight years to get a bridge in place, so, if we get 20 years out of it, then we've got 20 years to build a new bridge."

Glenn Jones with the Benton County Historical Preservation Commission said the report increased his optimism about saving War Eagle Bridge. Jones said the work proposed will allow residents to organize, form a nonprofit group and begin working on ways to protect and preserve the bridge after it's been replaced by a new bridge.

"It answered a lot of my questions," Jones said. "Now we have to move forward. The next big question is how is the Quorum Court going to look at this?"

Some of the justices of the peace said they will need more detailed information before they commit to spending money on the bridge. Tom Allen of District 4 and chairman of the Finance Committee, said he doesn't want to see a repeat of the 2010 project, where the county spent more than $600,000 on work failing to achieve what was expected.

"We've spent an awful lot of money on the bridge," Allen said. "I know it's a unique bridge, but I'm not going to support spending the money if the options proposed aren't good enough. I still have questions about what was done in 2010. Were we misled? Did somebody make mistakes? If it happened before, is it going to happen again?"

Barry Moehring of District 15 agreed with Allen that he wants more detailed information and assurances from the engineering firm about the work and the desired results.

"We have not identified the reasons we need that bridge and what do we need it to do," he said. "Is it for pedestrian use? Is it for local traffic only or is it for light traffic in general? Until we understand the nature of what we need the bridge to do, we can't make any decisions. We need to develop a consensus on the future of the bridge. I think it can be saved and saved for a long time."

Joel Jones of District 7 said work on the bridge will buy some time.

"Whatever we do, we need to open up the discussion with the historic preservation folks and the local residents," he said "That bridge needs to be replaced and preserved. That's a big project, It's a big bridge. Even if it's closed to vehicles it will need maintenance. And we have to look at the fact that at some point, we need to replace that bridge with something that will last for the normal lifetime of a bridge, not something we're going to have to be doing repair work on every few years."

Kurt Moore of District 13 said he would favor repairing War Eagle Bridge, but with the caveat the county needs to find alternative sources of money. Benton County has been awarded $500,000 by the state in Transportation Alternative Program money, and county officials are seeking assurances the money can be used for the repai of the bridge within the limits being considered. Moore said paying a substantial part of the cost would allow the county to proceed with planning and building a new bridge to take the heavy traffic load away from War Eagle.

"To me, that would be the best of both worlds," Moore said. "If we can get that heavy truck traffic that sneaks across it off of War Eagle, I think it probably could go further than 20 years."

The Transportation Committee will meet early in January to discuss the recommendations and take input, Adams said.