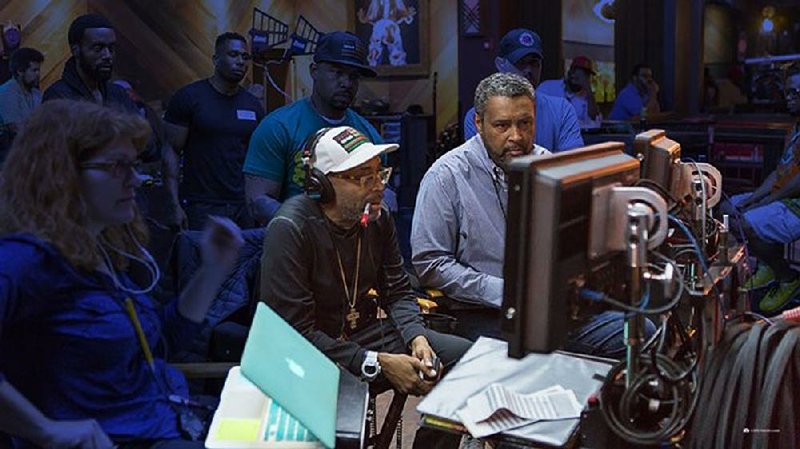 Spike Lee (left) and Kevin Willmott watch the playback of a scene from Chi-Raq, the new fi lm they’ve co-written about street violence in Chicago. The film, which is playing in Northwest Arkansas, is the first feature released by Amazon Studios and will be released On Demand soon.

Writer-director-actor Kevin Willmott is used to making studios and some viewers nervous and upset.

His 2004 film C.S.A.: The Confederate States of America is a mockumentary that imagines an America where the South has won the Civil War and slavery is still the law of the land. Destination Planet Negro stars Willmott as a black intellectual from the 1930s who voyages to space to escape prejudice but lands in contemporary Kansas City. There he discovers a world that has positive differences but still has many of the old evils.

Thanks to Amazon and Spike Lee, however, Willmott's stories are reaching a wider audience, and the controversy seems to be a selling point. Chi-Raq, which Lee directed and co-wrote with Willmott, and which is currently playing in Northwest Arkansas, updates Aristophanes' 2,500-year-old play Lysistrata, setting it in contemporary Chicago. (The title is a term Windy City rappers use that refers to the gang violence on the city's South Side. Since 2001, murders in Chicago have surpassed U.S. military deaths from the Iraq and Afghanistan wars combined.)

Willmott, who appeared in a production of Lysistrata back when he was in college, received some scorn from Chicago Mayor Rahm Emanuel and complaints that the film trashes the city. Speaking from his home in Lawrence, Kan., the home of the University of Kansas, where he teaches, Willmott says, "People, because of the Internet, jump to conclusions before they know anything about it. I remember after the premiere in Chicago. I know that there were people in the audience who were wanting to not like the film, and afterwards, their attitudes had all been adjusted."

"Why would Jennifer Hudson, who's lost three people including her mother and her brother to gun violence, be involved with a project that would be making fun of victims of gun violence? There's no way. She loved the script. It just lets you know that people are so far removed, and their understanding of satire is so limited these days," Willmott says.

Some of the most powerful performances in Chi-Raq come from people who aren't actors at all. "The people we use are real former gang members that are in wheelchairs," Willmott explains. "All the mothers in the film that are holding photographs of their children, those are real mothers."

Even those who read the script might have misunderstood what Willmott and Lee were up to. The new film stars Teyonah Parris as Lysistrata, who tries to stop warring gangs called Trojans and Spartans by uniting the women of the city to organize a sex strike.

According to Willmott, such intimacy boycotts are not wishful thinking from a long-dead dramatist. They have real-world results, some of which are listed in the film.

"Leymah Gbowee from Liberia won the Nobel Peace Prize, and part of the reason she won was for a sex strike that helped end the war between Christians and Muslims. There are women in South America who use sex strikes to get roads fixed.

"Sex strikes have been an effective way of getting men's attention for years, from the beginning of time. Most men would say when they're being stupid, a sex strike gets their attention pretty quick [laughs]. It's been a way to get attention, and then you can start working on a conscience. That's kind of what's happening in the film. It's not just the sex. It's the affection that they're missing."

Speaking of affection, Willmott repeatedly acknowledged Amazon's willingness to get behind a satirical film about warring gangs where all the characters talk in verse and Samuel L. Jackson wanders in and out of the story like a classical Greek chorus.

Willmott wrote the initial script for Lee 13 years ago under the title Got to Give It Up, but it wasn't until Lee wanted to set the story in Chicago, and Amazon agreed to back them, that the film became a reality.

"It was a production company that had the guts to make the film," he says. "I hope they stay loyal to how they started. They were amazing to work with, and no one in Hollywood but Amazon would make this movie, probably. That has to do with their courage and their vision and their willingness to go into new areas. Somebody has to start something out first, and then everybody wants to follow. You have to hand it to them."

Lee kept Willmott on board and even cast his co-writer in a supporting role. "I'm some alderman from the area. I'm probably one of those slick aldermen who are ripping people off," he says. "We did lots of little rewrites along the way and added things along the way and responded to events along the way, so it made me feel like a big part of the team."

According to Willmott, Aristophanes has more to teach today's dramatists than simply how to use sex, or lack thereof, to stop fights.

"The Greeks figured it out a long time ago not to show violence onstage. They show the aftermath of violence. The aftermath of the violence is more effective than the violence itself. So when Oedipus puts his eyes out, he goes offstage and comes back on stage, and his eyes have been gouged out. The reality of that is far more disturbing than seeing the gunshot itself. We've become totally numb to that. Gunshots are just cool in movies. They're not disturbing at all. They're just cool. We're just immune to all of that. You can maybe get people's attention by maybe showing the aftermath of violence," he says.

In addition to the Hellenic theater, Willmott freely admits that he has been influenced by attending the now defunct Catholic Marymount College in Kansas and by Philip and Daniel Berrigan, the brothers who, as Catholic priests, were vocal opponents of the Vietnam War. In addition, Chi-Raq features Cusack playing an activist priest based on Father Michael Pfleger of St. Sabina Catholic Church.

"Universities that are interested in peace and anti-war kind of statements, those are the universities that usually do Lysistrata," he says. "With the Berrigans, that was one of the things that John Cusack and I had in common. His father, I believe, knew Phil Berrigan, and so there's a lot of Berrigan influence. I think you see it in the church scene in the film. Father Michael Pfleger is like the new Dan Berrigan. He's a force to be reckoned with."

"He's following that same vision of radical Catholic priests that are really trying to push the Church and the nation forward in various ways, especially with the idea that Jesus wasn't about killing folks. And Jesus is about the poor, and Jesus is against war. It seems like such an easy, clear thing, but somehow that gets lost in the translation part of the time. It was really great to be part of the St. Sabina community there. And it was great to know Father Pfleger and have his influence on the film. We took a lot of what John says from Father Pfleger's speeches and sermons that he's given. That really grounded it in a reality that was true and was grounded in the reality of Chicago violence and the Chicago problem."