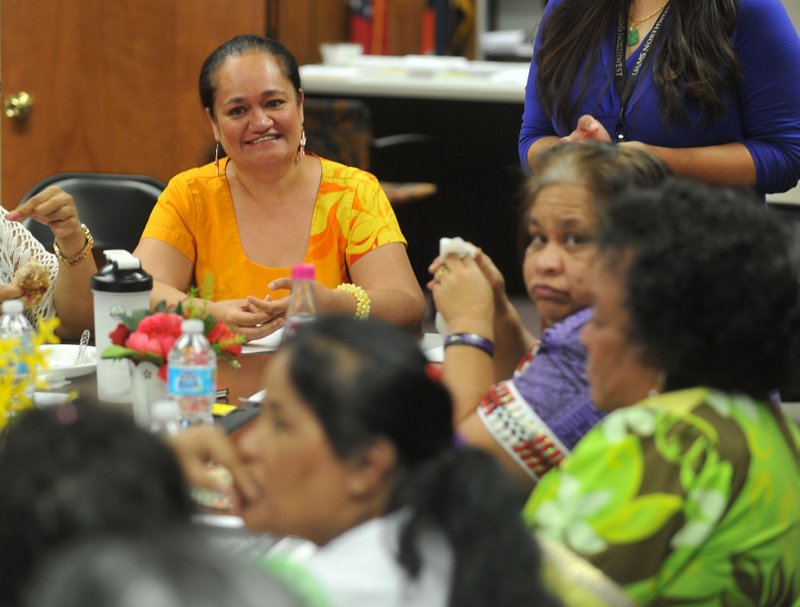 Nia Aitaoto, talks to a group of Marshallese women July 28 during a lunch meeting at the Marshallese consulate office in Springdale. Aitaoto will help run the nation’s first Center for Pacific Islander Health.

SPRINGDALE -- A newly opened center hopes to improve the health of the local Marshallese community, keep the changes going for generations with education and outreach, and share what it learns to help Pacific Islanders everywhere.

The Center for Pacific Islander Health started July 1 at the University of Arkansas for Medical Sciences Northwest. The program is building off research under way at the school, said Pearl McElfish, director of the medical school's research department and co-director of the center.

The start of the Marshallese migration to Northwest Arkansas is traced back to the 1980s when one man found work in a Tyson Foods plant and told family and friends back on the islands.

"The center will allow us to expand the methods and programs we develop in Northwest Arkansas to the rest of the U.S. and the U.S.-affiliated Pacific Islands," she said.

Countries include the U.S. trust territories of American Samoa, Guam and the Commonwealth of the Northern Mariana Islands; Federated States of Micronesia, the Republic of the Marshall Islands the the Republic of Palau.

This isn't the first U.S.-based center to include Pacific Islanders, but it is the first dedicated to that population. Nia Aitaoto, the center's co-director, said other centers tend to focus on Asians and Native Hawaiians.

"Then we had our first trip here, and we had the feeling that it just felt right. In our culture, we plan five generations down," said Aitaoto, who is Samoan. "When you look at the census of where people are moving, this is the fastest growing."

"I think the issue is Pacific Islander is a relatively small population, even aggregated. They often don't get the kind of attention they well deserve," she said.

The U.S. Census Bureau estimates 1.4 million residents were Native Hawaiian or other Pacific Islander, either alone or in combination with one or more additional races, in 2013. Native Hawaiians accounted for 560,488 residents, followed by Samoans at 175,589 and Guamanian or Chamorro at 120,706.

Chin said she looks forward to the centers working together.

The research department asked what their biggest health concern was when it decided to work with the Marshallese, McElfish said. It discovered between 30 and 50 percent of Northwest Arkansas' Marshallese residents have Type 2 diabetes, a rate 400 percent higher than the general U.S. population.

The medical school got a $2.1 million grant last year from the Patient-Centered Outcomes Research Institute, a nonprofit organization focused on identifying best health care practices, to study ways to teach diabetes self-management skills in coordination with care provided through the North Street Clinic.

Research is examining whether a family-based approach is more effective than traditional doctors' office visits. This includes going into the patients' homes to teach practices such as healthy cooking.

The research department has a three-year, $2.99 million grant from the federal Centers for Disease Control and Prevention to study health disparities in the Marshallese and Hispanic communities in Benton and Washington counties.

The university also received a $250,000 grant from the Patient-Centered Outcomes Research Institute that will help Pacific Islanders interested in health research connect with experienced researchers. The program will include 20 participants creating 10 teams. Marshallese community members will learn how to recruit and retain study participants, partner with communities and design a study.

The Marshallese also suffer higher rates of Hepatitis B, tuberculosis, leprosy, cancer, heart disease and obesity. Chin said eight of the 10 countries across the globe with the highest obesity rates are in the Pacific.

"They have among the highest health disparities in the world," Chin said of Pacific Islanders.

Radioactive fallout from the U.S. testing nuclear bombs in the Marshall Islands between 1946 and 1962 is blamed for high cancer rates there, but a report by the U.S. Centers for Disease Control and Prevention shows the rate is declining, partly because people directly affected by the fallout are dying.

The report states there is a need for more promotion of effective preventive, therapeutic and palliative care services to improve islanders overall health.

Carmen Chong Gum is the consulate general in Arkansas for the Republic of the Marshall Islands and she said the center will have a broad reach. The consulate office opened in downtown Springdale in 2008.

"We look at all the needs, from head to toe," she said, such as health, soul and culture. "UAMS is identifying the needs of the community."

Two more center priorities are educating medical workers nationwide on how to treat and interact with Pacific Islanders and teaching members of the islander communities about research.

It's important to get the Marshallese community involved in promoting the center, said Dr. Sheldon Riklon. He is the University of Hawaii's Department of Family Medicine and Community Health clerkship director and a frequent visitor to Arkansas. Riklon is one of two U.S.-trained Marshallese physicians.

"The concept of Western research is taboo in the islands," he said.

Riklon said having Marshallese community members visit their friends and neighbors shows its OK to participate.

"It helps break down the barriers," he said.

Anita Tomeing-Iban has lived in Springdale for 19 years and has diabetes. She said Marshallese people are reserved.

"Distrust is part of our nature," she said.

The idea is to learn best practices, a technique or methodology that through experience and research has proven to lead to the best result. Aitaoto said she worked on Pacific islands for 15 years and best practices there don't exist such as care for cancer survivors.

"We found there are a lot of survivors, but no plan to help them make a better life," she said.

A group of eight people from the islands are traveling to Northwest Arkansas on Aug. 17 to learn about programs and will develop a plan to use back home for cancer survivors, she said.

The Center for Pacific Islander Health hopes to build on practices in use at the Community Clinic offices. Kathy Grisham, the clinic's executive director, said its physicians train on working with the Marshallese patients, and she has five Marshallese employees. The nonprofit clinic has nine sites across Benton and Washington counties, including medical and dental clinics and school-based centers. Low-income patients can qualify for a sliding fee scale.

The Community Clinic saw 2,230 Marshallese patients last year, a 30 percent increase from the year before.

"It steadily grows every year, about 12-15 percent every year," Grisham said.

"I don't think many other community members see a lot of Marshallese patients, but training will be great for our hospital workers," she said.

Aitaoto said the center will work with people from beyond Arkansas' borders.

"To us, it is a broader plan and a lot of the things we are doing are innovative," she said. "Programs and research are needed together and our programs are research."