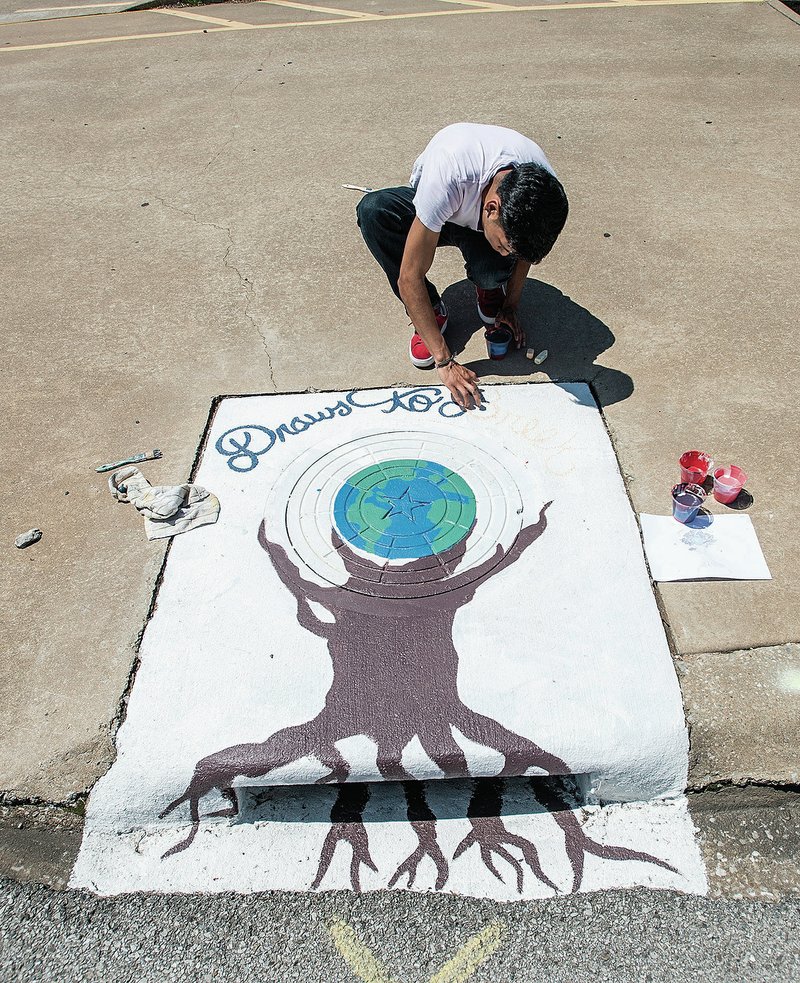 NWA Democrat-Gazette/ANTHONY REYES &#8226; @NWATONYR Jose Barroso with the Archer Learning Center paints &#8220;Drains to Creek&#8221; on a storm drain cover Thursday at Park Street and Meadow Avenue in Springdale. Barroso and other students from Archer, in partnership with Team Springdale, the UpStream Art Project and volunteers from the Springdale Senior Center painted the covers on each corner of the intersection. The covers tell residents that the drains empty to streams to keep them clean. For photo galleries, go to nwadg.com/photos.

SPRINGDALE -- Community members worked this week on a public art project to help the downtown area and surrounding neighborhood in more than one way.

Students from Archer Learning Center and people from the Springdale Senior Center worked under the afternoon sun Thursday to paint four storm drain covers at the intersection of Meadow Avenue and Park Street. The covers showed paintings of a fish, a lobster, a dragonfly and water. People in passing cars looked on and watched the painters.

• Water and items washed into storm drains aren’t treated and flow directly into creeks and streams.

• Used oil from one oil change in a car can pollute up to one million gallons of water.

• Excess fertilizers and pesticides on lawns can wash into storm drains and into creeks and streams.

• Pet waste washed into storm drains and then to creeks and streams can cause algae growth.

Team Springdale, a group promoting the city via social media, and UpStream Art Project organized the project. UpStream is an effort through the Division of Agriculture at the University of Arkansas promoting awareness and protection of water quality, said Jane Maginot, project manager for UpStream. People across Northwest Arkansas work with UpStream to promote awareness through painting storm drain covers.

Richard Swanson attends an art class at the Senior Center and helped to paint the drain covers Thursday. He said he hopes the artwork will make people think twice about where their water goes. The water from storm drains flows to local streams.

"If you're not careful, you're polluting the natural beauty of it," he said.

Jamaica Durell, a student at Archer, knelled close to a drain cover and used orange chalk to draw flower petals before painting. She said she got involved in the project because she likes to draw and a teacher asked her if she would participate.

Durell said she hopes the artwork brings awareness to creeks and rivers. She also said she hopes the paintings will "brighten" people's moods and get their minds off the recent homicides that happened in a neighborhood just south of the intersection.

Public art could give nearby residents an amenity, said Jonathan Perrodin, who co-founded Team Springdale with Amber Perrodin. It can deter graffiti and help with revitalization efforts in the area.

The Perrodins also own a studio nearby at 509 Success Ave., where the back wall had multiple layers of graffiti, he said. They mounted a quilt-like painting on the wall in January and haven't had any issues with graffiti since.

Archer students and people from the Senior Center began painting the drain covers on April 10, Amber Perrodin said. They talked to Maginot last fall about locations for the project in Springdale, Jonathan Perrodin said.

"We are really interested in having lots of public art in Springdale," he said.