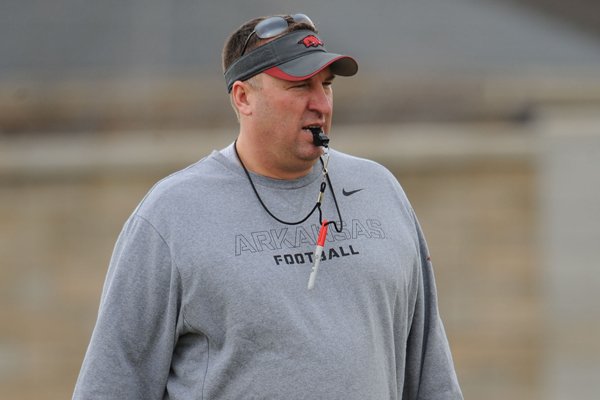 He has researched how Arkansas Coach Bret Bielema likes to use the tight end position and likes what he's discovered in addition to hearing good things about the program from the parents of another player.

His father has known the parents of Arkansas offensive tackle Brian Wallace Jr. for numerous years.

"They speak very highly of Arkansas, and Arkansas has always been somewhere I thought of playing," Scales said. "I don't know why, but it just came to be like that since I was younger. I don't know. I can't wait to get down there. I'm excited."

Scales has excellent athletic ability and is physical for his position. He had 49 receptions for 670 yards and 9 touchdowns and rushed for 77 yards and 3 touchdowns at quarterback out of the Wildcat formation and as an H-back.

"Coach Pittman, he's funny and he's just really cool," Scales said. "We talk a lot about track and we joke around a lot. He's just a really cool guy. Obviously, he's the offensive line coach, but he's somebody I would like to be around a lot."

Scales said recently he had a 30-minute conversation with Lunney.

"He was talking about the campus and what Arkansas is all about," Scales said. "He got me excited about it."

Scales is unsure what he'll major in but knows he wants to work with children eventually.

"I'm leaning more towards autistic and special needs kids," he said. "I haven't really found anything like a major that works with that. I guess there's a lot of them, but I don't really know what that consists of."

He said he likes spending time with special needs kids.

"I will just high-five them and they're always happy and joyful," Scales said. "I don't know. I just really enjoy being around them. It just brightens up my day."

He's hoping to make his college decision before the school year ends sometime during the third week of May.

"If that's not the right time I won't, but that's what I'm looking to do," Scales said.

Scales has visited all but two of his top schools.

"I haven't visited Arizona State," he said. "I believe I'm going to soon, and Oklahoma State."

Curry, 6-8, 195, is drawing interest from Arkansas, Vanderbilt, St. Louis, Iowa and Oregon. He received the offers after shining for the 17-under Arkansas Wings in a Nike Elite Youth Basketball League event in Hampton, Va.

"I was just thankful," Curry said."I was really happy and excited. I never thought I would get this far while coming up. I just worked hard, and the hard work paid off."

He and Arkansas associate head coach Melvin Watkins communicate on a regular basis.

"He'll text me little quotes telling me to stay in the books, keep working hard," Curry said. "Just motivating me every day."

Curry averaged 15.4 points and 8.6 rebounds for Southwest Christian, which plays as an independent school and travels the nation playing more than 35 games against schools like Oak Hill Academy in Virginia and Huntington Prep in West Virginia.

He said he believes his skill set is a good fit for Arkansas' style of play.

"I play up and down the floor a lot," said Curry, who played at Memphis Ridgeway as a sophomore. "I run the floor well."

One of the top sophomore prospects in Oklahoma plans to visit Arkansas on Saturday and will watch the Razorbacks' scrimmage.

"I've heard from everyone that it's beautiful," he said of Fayetteville. "I love the tradition at Arkansas, and I love the SEC, too. So it ought to be fun."

Draper said he has cousins on his mother's side who live in Arkansas.

"They're huge, huge Arkansas fans," said Draper, who reports running an electronic time of 11.07 seconds in the 100 meters this spring. "They've told me all about it."

Draper, who has started since his freshman season, isn't likely finished growing and could grow into being a defensive end.

"They said my growth plates are wide open," Draper said. "There's no telling how tall I'll end up."