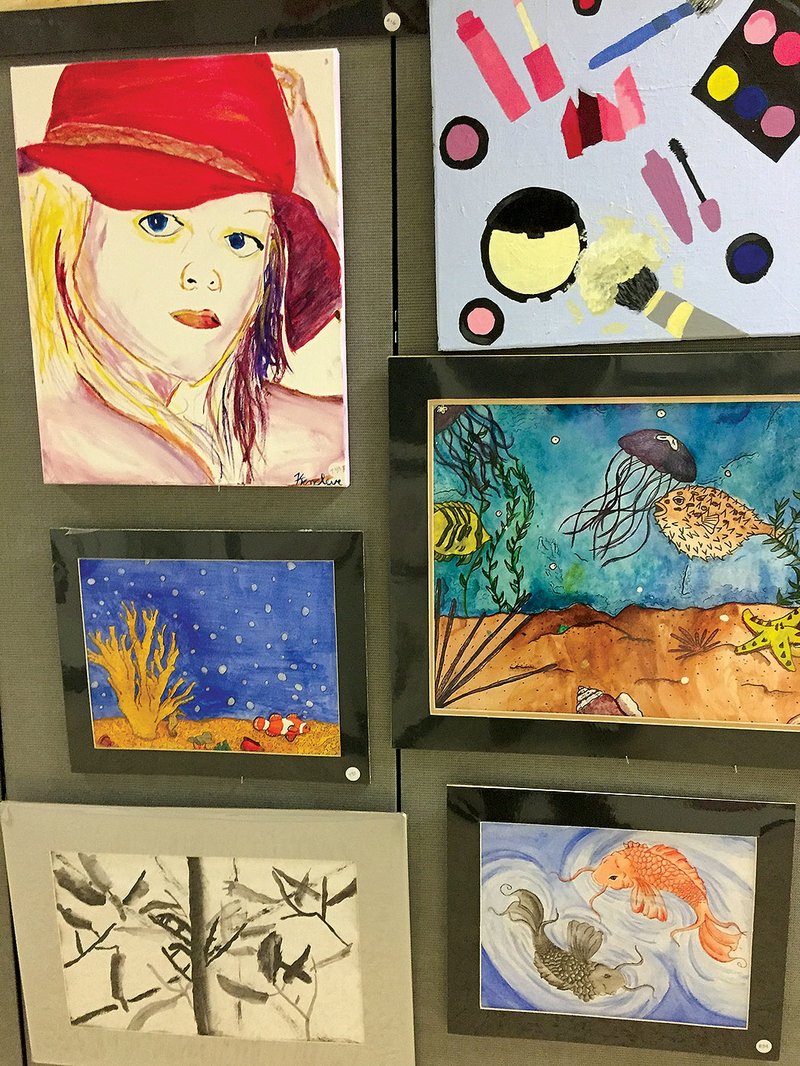 Dawn Holder can thank a young child for her newest series of art.

Actually, "thank" is probably a strong word considering this child jumped in the middle of her artwork, which contained more than 75,000 individual blades of porcelain grass organized to resemble a lawn. She had to manually replace thousands of them, each molded in painstaking detail.

Jane Owen couldn’t bear to eliminate any of the 800 or so pieces submitted to the River Valley Student Art Competition. So each and every one gets a spot either at the Center for Art and Education in Van Buren, where she is executive director, or at the Fort Smith Regional Art Museum. The works debuted Tuesday and will be on display through April 24.

Students in kindergarten through 12th grade in a six-county region surrounding the museums could submit work for consideration. Art was collected from a total of 52 regional schools.

The works represent a range of mediums, including painting, drawing, sculpture and mixed media. There’s a diversity in subject matter, too, from images of owls to those of Miley Cyrus. The works take up the entire floor of FSRAM’s lower level, a space typically reserved for classes and studio work.

A reception for the students whose works are showcased in the exhibit takes place from 1-4 p.m. Sunday at FSRAM.

“For some of these kids, it’s the only time they’ll get recognition,” Owen says.

The work, "Suburban Lawn Iteration III," earned her top prize at last summer's River Valley Invitational at the Fort Smith Regional Art Museum. The victory came with the honor of a solo show, and those newest works, "Several Collections of Commemorative Plates," debuted earlier this month at FSRAM.

Seeing the indentations of small feet in her work caused her to move forward with a new idea, one that didn't rest on the ground.

"I knew I was ready for a new body of work," says Holder, an assistant professor of art at the University of the Ozarks.

She wanted something a little less fragile, and something that could be displayed on a museum wall.

She began cultivating some new theories last summer, and through trial and error developed the concept that would become the current "Commemorative Plates" exhibit. She started working on the individual elements and computer modeling for "Commemorative Plates" last fall, meaning she put more than six months of effort into the six pieces of work now on display in Fort Smith.

The works are not entirely new. They incorporate Holder's love for minutia, spreading that concept over large spaces. The exhibit also showcases her chosen medium, ceramics, or more specifically, porcelain. Along with the idea to orient the new works vertically, instead of horizontally, she wanted to explore the confluence between the indoors and the outdoors. Brainstorming about household items, she discovered her muse -- a light switch.

"Visually, it's a very simple form. It's a light switch but also a frame. It's actually a really important space. And it's a simple, mundane, crappy piece of plastic," she says.

She built a mold for the light switches, then created works around that construct. In "Compendium of Arkansas Plants," the light switch base serves as a template for images of both actual botanical plants and pictures of Arkansas power plants. The companion pieces "Sunset (Red)" and "Sunset (Blue)" extend away from the light switches with a series of brightly colored flowers. The flowers are a recurring them in the six-work series. They were crafted with the idea of being able to repeat the process hundreds of times. For the flowers central to "Commemorative Plates," she used a cake decorating tool used to make flowers, then a stamp to press them into a more multi-dimensional form. All of the pieces were then glazed and fired in the University of the Ozarks art department.

"I imagine myself as a human factory," Holder says.

Lee Ortega, executive director of the museum, praised the collection as one of the strongest ever featured at FSRAM.

"The craftsmanship is remarkable. ... Everything from the concept to the execution is just great," Ortega says.

Holder's already busy pace will continue unabated. She says she is still cleaning up the aftermath of making thousands of flowers and ceramic light fixtures in her studio space. A version of Holder's "Lawn" work will later this year be featured in the show "Organic Matters: Women to Watch 2015" at the National Museum for Women in the Arts in Washington, D.C. She's uncertain about her next project, which won't debut until February.