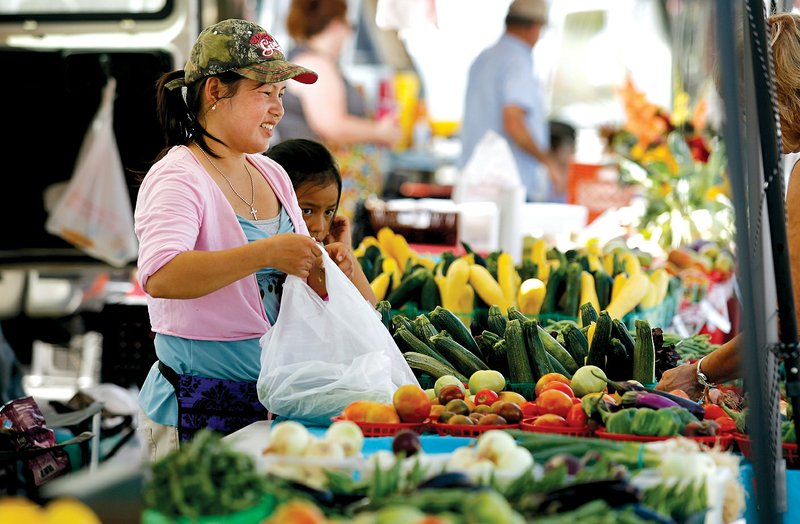 Arkansas may be the top producer of rice and poultry, but food isn't always widely available to its residents.

The state is ranked No. 1 in the country for senior hunger, says Jerry Mitchell, executive director of the Area Agency on Aging of Northwest Arkansas. Some 13 percent of residents ages 60 and older live in poverty, and nearly 25 percent have some form of food insecurity caused by monetary issues, he says.

Fayetteville Market at the Mill

Springdale Market at the Jones Center

Fayetteville Market on the Square

7 a.m.-noon Tuesdays and Saturdays starting in May.

Coupons may only be used to purchase locally grown fruits, vegetables, herbs and honey from local Farmers’ Markets between May 1 and October 31.

For more information on the program or to find a coupon sign up and distribution date, go online to aaanwar.org or call 800-432-9721.

"There has been a lot of exposure on kid hunger, but we would really like for more people to get involved with this," Mitchell says. "It's unreal that so many older individuals are at risk of going without food."

Some 96,046 seniors in the Northwest Arkansas region are considered low income, including 63,500 in Washington and Benton counties alone, says Jamie Cooley, regional manager over client services at the Area Agency on Aging. These seniors often do not get enough food or have enough money for healthy options, she says, risking their health and well-being.

"We need programs which encourage low-income seniors to eat healthier and reduce their chances of becoming unwell," she says. "These seniors benefit from a farmers market program where they can get fresh, healthy foods that they would otherwise be unable to afford."

In early 2013, the Area Agency on Aging announced it would take over the USDA Senior Farmers' Market Nutrition Program and begin administering $50 coupon books to senior adults to purchase locally grown fresh foods and herbs at local farmers markets.

Nadine Raney, director of senior center services at Area Agency on Aging, notes that 600 Washington County seniors signed up for the program last year, and more than 1,900 benefited from the coupon books across the agency's nine-county coverage area.

"The program has been around for about 10 years, but we have seen a rise in participation more recently," she says.

The Senior Farmers Market Nutrition Program is not the only healthy eating initiative benefiting the residents of Northwest Arkansas.

In June of 2014, 15 area farmers markets signed up for SNAP and EBT benefits. The number rose to 32 this March, including 16 in the Area Agency on Aging's coverage area, says Amy Webb, director of communications at the Department of Human Resources in Little Rock.

"We're seeing a lot of interest in the program, and people want to get in on that business," she says. "There is so much focus on buying locally and eating fresh that programs like SNAP and EBT are a natural fit for farmers markets. It's just another way for people to access better food. It's a good option to have."

Local farmers markets are seeing an increase in patronage, says Cooley, who notes that the Senior Farmers' Market Nutrition Program helps to stimulate the local economy by providing a new customer base for farmers.

"This not only encourages low-income seniors to eat better but allows farmers to sell to more people," she says. "It's money they would otherwise not receive. And the farmers know the seniors are low income, so they make sure the seniors get their money's worth."

And for Mitchell, ensuring low-income seniors have a chance for a longer, healthier life is exciting. He says he hopes the trend toward healthier eating through government programs will allow more Arkansas residents to improve their health.

"We top all of the unhealthy categories," Mitchell says. "Obesity, COPD, diabetes, heart disease -- all the bad ones -- and we're right up there. We need the healthier options, especially for seniors. This program tries to get them that nutritional food. Or even enough to eat at all."