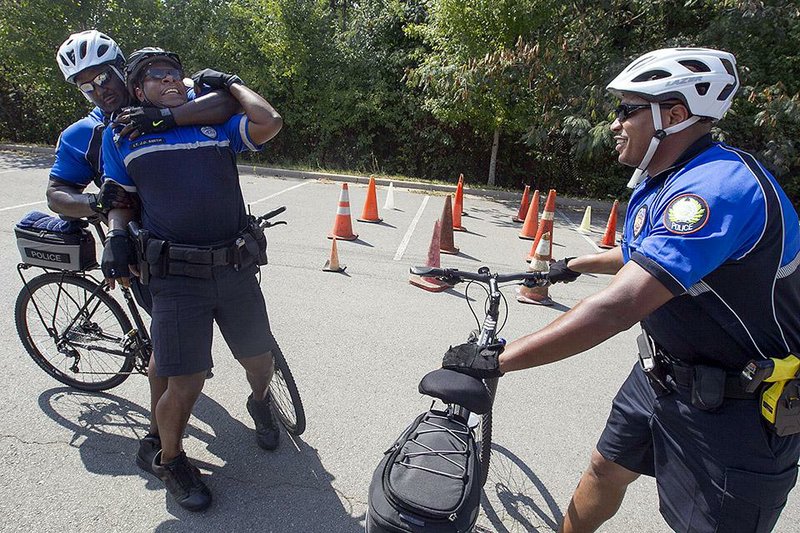 Arkansas Democrat-Gazette/BENJAMIN KRAIN --09/16/2014-- UALR police Lt. Johnny Smith, center, plays the role of a suspect while demonstrating ways of apprehending a suspect from bicycles during a training course for Little Rock police officers. UALR's Department of Public Safety has been utilizing bike patrols on their campus and were asked by the Little Rock Police Department to help prepare about 20 officers for their own bike patrol. --WITH VIDEO---

Twelve officers with the Little Rock and the University of Arkansas at Little Rock police departments transitioned from patrol cars to bicycles Wednesday after completing a condensed, three-day course for bicycle patrol.

Ten of the 12 officers who completed the course are officers with the city's force, and their enrollment demonstrates a larger commitment to "community policing," Little Rock Police Chief Kenton Buckner said.

Having reinstituted 13 Community Oriented Policing Services alert centers throughout Little Rock, Buckner said he hopes to get all officers serving in those centers "bike certified." It is a U.S. Justice Department nationwide program.

"It will give them [officers] the opportunity to get out in the community and do some of that hand-to-hand, face-to-face interaction with the public," Buckner said. "That's kind of key to building trust, which is one of our bigger opportunities for the agency. There's obviously some trust issues in certain sections of our city, and this just gives [residents] the opportunity to get to know their police in a more intimate way."

The bicycle patrol course was taught by Lt. Johnny Smith of the UALR Police Department, who has taught the course for a decade. Although it has traditionally been a five-day training course, it was condensed to three days for the most recent class.

"When you have a five-day class, it takes a toll on personnel," Smith said. "A lot of these departments can't afford to have a person gone a whole week."

Little Rock officer Charles Starratt, a 52-year-old department veteran who had originally been assigned to bicycle patrol in the mid-1990s before returning to squad car patrol, said every officer in the department has the opportunity to apply for the class.

After filling out forms that will be used to assess officers' skills and knowledge relevant to a particular specialty, candidates undergo an interview and assessment process to determine whether they will be accepted into the class and the assignment that follows.

Starratt, who is returning to bicycle duty after more than a decade and a half in car patrols, said the course can be challenging for patrol officers if they haven't kept up a fitness routine.

"You're sedentary," Starratt said. "If you don't have a physical fitness program you do before or after hours, it can put some weight on you, sitting in a car."

Smith said that while most officers are in decent physical shape before they attend the class, many find the amount of riding during the three days a challenge.

"We go through the woods, up hills. It'll put you in shape," Smith said. "Some of the officers said they noticed their uniforms felt a little big after three days. I myself have lost about seven pounds this week already."

And while all officers who enrolled in the class knew the basics of bicycle riding from childhood, the course focuses on techniques of balance, maneuvering, suspect apprehension and defense that were new for the participants.

"You always put the bike in front of you," Smith said. "If you're chasing someone down a hill, you need to know how to put your weight in the rear so you don't just flip over."

Regina Wade-Carter, interim police chief for the UALR Police Department, said bicycles for the department, which cost from $1,300 to $1,600, were purchased out of the department's fiscal 2013 budget and are not considered a recurring budget item. She said the use of bicycles on campus is less about arrests and more about making officers more available to students, faculty and staff members.

Bicycle-mounted police, as well as foot and horse patrol units, are designated as "Henry" units, in memory of Henry Callanen, a Little Rock officer who was killed in the line of duty in 1993 after more than 35 years on the force.

Officer Heather Carpenter, who joined the UALR department two months ago, said she hoped being part of a Henry unit would facilitate communication between her and the students, faculty and staff members on campus.

"Once you develop a relationship with some of these students, they'll come to you more willingly," Carpenter said. "The world's more open when you're on a bike. You can get to places on campus easier on these bikes, as well."