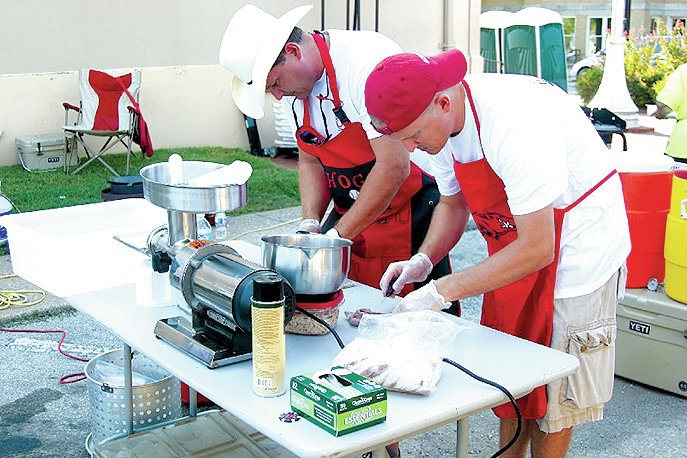 Courtesy Photo Last year&#8217;s inaugural World Championship Squirrel Cookoof welcomed 19 teams and about 5,000 patrons, all in support of conservation efforts and local charities. This year, proceeds from the event will benefit Youth Bridge.

A group of squirrels is called a dray or scurry, but in Northwest Arkansas this weekend, it'll be called "dinner."

The National Championship Squirrel Cookoff is Saturday in Bentonville, and according to Joe Wilson, it's going to be a feast for the senses.

Last year's inaugural cookoff welcomed Food Network's Andrew Zimmern, 5,000 patrons and boasted 19 contestants. And although Zimmern is not expected to be present, this year's unique culinary event is poised to be even bigger, says Wilson.

"We have 42 teams coming from 13 states," he says. "We even have an all-female team of lawyers from New York City."

The competitors will travel to Northwest Arkansas for the event, but they won't be coming alone. Each team will be responsible for bringing its own squirrels, he says, but since squirrel season is open all but about 75 days a year, finding the scampering rodent shouldn't be too difficult.

It's nabbing them that's the problem. Squirrels are particularly cagey, Wilson says, causing hunters to need a wide range of skills including marksmanship and camouflage to be successful at catching them. Squirrel hunters can spend hours and even days in the woods, learning the land and environment well enough to locate the elusive rodents. Although the critters are common and hunting them is straightforward, their use of vocalizations can be a roadblock.

It's a problem that's partially solved by another competition taking place Saturday.

"We'll have a squirrel calling competition going on during the squirrel cook-off," Wilson says. These unique calls are made with either hands or devices, creating barks, clucks and distress calls that mimic the real thing and bring the squirrels out of the trees, he says.

Once this "organic, cage-free meat," is harvested, this weekend's competitors will bring the skinned carcasses still raw and unprepared to the event, at which point they will have 2.5 hours to create their masterpieces, Wilson says.

And while that time frame seems more than adequate, it really isn't. Each team must debone the squirrels at the competition, and as each dish can take between 12 and 15 squirrels each, that's a big chunk of time. To make up for lost time, Wilson has allowed each team a third member, who will likely be responsible for deboning, he says.

Each team will be creating a unique dish from its own recipe. The only requirement is that the dish contain at least 80 percent squirrel meat. Expected dishes include stews, Italian food and pastas, pizza, tamales and "little squirrel sliders," says Wilson, which will be presented to the 12 judges for tasting.

Wilson says he hopes this one-of-a-kind food competition will help promote conservation efforts by hunters throughout the United States.

"Right now, we have the highest population of squirrels and the lowest population of hunters in history," says Wilson. "These squirrels can cause a lot of damage, so there is a need to control the population." Over-population can cause disease and food shortages and lead to squirrel migrations that disrupt natural environments, he says.

"I want the public to know that this more than just a unique meat," he adds. "It's sustainable, organic meat for everybody. And it's good."