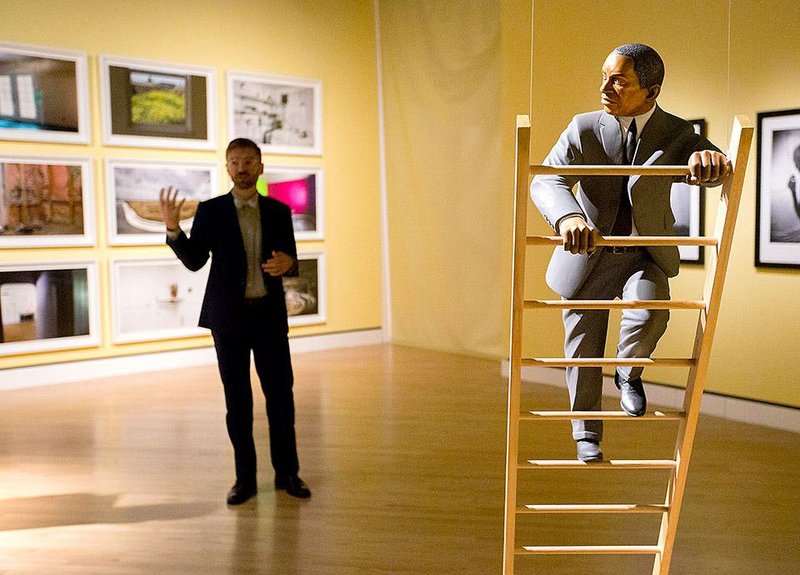 NWA Media/JASON IVESTER --09/11/2014-- Assistant curator Chad Alligood (left) describes art pieces to members of the media during a tour of the State of the Art exhibit on Thursday, Sept. 11, 2014, at Crystal Bridges Museum of American Art in Bentonville.

During the search for the new contemporary-art exhibition, "State of the Art: Discovering American Art Now," museum officials went to the artists' homes and studios when possible to better understand their approach to art.

"State of The Art" media preview

"It is magical and inspiring to be in the studio, a place of making, and to see where [the art] comes from, both physically in the space but also emotionally," said Crystal Bridges President Don Bacigalupi. "[These artists] are not living and working in a vacuum. They live their lives, they have families, they have community, they have people who influence them, they have ideas that are circling around them.

"To see that manifest in the space where they create and kind of envision their work is very special," he added. "It meant we got a quick read on what their process was about."

Bacigalupi and curator Chad Alligood began about a year ago on a 100,000-mile cross-country mission to track down artists whose work had not been recognized on a national scale. From nearly 1,000 studio visits, they selected 227 works by 102 artists, including four from Arkansas: Guy Bell and Delita Martin of Little Rock, Linda Lopez of Fayetteville and John Salvest of Jonesboro.

A media tour of "State of the Art" on Thursday morning provided a first glance at the exhibition before the artists, museum members and sponsors viewed the collection later in the day. Many of the artists were expected to attend a party for some 1,000 guests at the museum Thursday night. "State of the Art" opens to the public Saturday and runs through Jan. 19. Admission to the museum and the exhibition is free.

The studio visits were distributed across the nation's regions, with artists of all ages (24-87) and experience working in a wide variety of artistic mediums -- oil on canvas, photography, video, installation, sculpture, ceramics and more. Some works use found objects, including furniture, romance novels, the backs of outdated plastic televisions and discarded lottery tickets.

According to museum officials, the works are arranged throughout the museum as if they are in conversation with one another within the spaces they are being exhibited. Short thematic subtitles such as "The stuff of daily life can reveal hidden stories," "Repurposed materials gain power and meaning" and "Human bodies carry personal and historical significance" suggest the connections on gallery walls.

At the onset of their journey, said Alligood, he and Bacigalupi ventured off into a region with the mindset that "somebody better emerge here."

"And almost immediately that pressure dissolved," Alligood said. "The strength and depth and integrity of the artists and works we saw in our very first trip ... we were like 'Oh, the problem is going to be culling it down.'"

Alligood said they could have curated up to 10 temporary exhibitions from the quality of art that they saw.

"This research will continue to drive our exhibition program, not just for now, but for the foreseeable future," he said.

Perhaps one of the most intriguing pieces is an installation of decades-old furniture and decor. At first glance, Slow Room by Brooklyn-based artist Jonathan Schipper looks like your grandmother's living room. A closer look reveals a small hole in the wall at the back of the room from which thin cables stream to the couch, piano and every lamp, framed photo and knickknack.

Over the course of the exhibition, a motor behind the wall will slowly drag each object toward the hole, collecting them and destroying them in the process. Volunteers working the show have been warned about the sound of crashing wood on wood and breaking glass as Schipper's work breaks down. A time-lapse camera mounted above will capture the process.

"Everything you see in the room will be smashed, pulled from the wall, crunched and destroyed in some cases, all accumulating in that section of the room," Bacigalupi said. "The idea is that even the things we hold most comforting ... are in motion, literally atomically speaking but also in our daily lives."

Groundbreaking works include a trio of flowers in glass, though not in the traditional sense. Seattle-based artist Flora Mace and partner Joey Kirkpatrick invented a way to place flowers, from the roots up, in layers of glass so that they are permanently encapsulated. Mace deconstructs living plants -- leaf by leaf, petal by petal -- then rebuilds the flowers from their component parts in three-dimensional slabs of hot glass, preserving their shape and color. Her "State of the Art" works are titled Big Violet, Tazetta Narcissus and Fritillaria Checkered Lily.

More on the whimsical side, Detroit-based artist Hamilton Poe's work Stacks utilizes everyday box fans attached horizontally to a wall with weighted sombreros sitting on the fans. As the fans blow air, the sombreros lightly bounce and turn. The installation is reminiscent of Donald Judd's notable wall-mounted sculptures, one of which, Untitled, 1989 (Bernstein 89-24) in copper and red Plexiglas, is a part of Crystal Bridges' permanent collection.

"State of the Art" also includes a number of interactive works as well, such as Andy DuCett's Mom Booth, which resembles a mom-manned domestic-information desk providing visitors with advice. Behind them is a set of shelves stocked with domestic supplies. An online description of the piece said Mom Booth "is made as much by the viewer's experience and enjoyment of it as it is by the artist."

Alligood said he was particularly proud of the regional representation in the show. Little Rock-based artist Martin has three works in the exhibition: The Dream Keeper, Bearer and Standing in the Night, all an ode to black women. At least one of the images is of Martin's grandmother.

Her colorful pieces combine printmaking, drawing and painting to create images of black women, incorporating household items such as bowls, Mason jars or spoons -- a personal iconography she uses to expand upon the portrait, providing context and tone.

"In some cases, we are calling these discoveries," Bacigalupi said of the "State of the Art" artists. "We're not claiming that these artists are unknown. In fact, many are well-known and well-respected in their locality, their town, city or even in their region, but they've not really been beneficiaries of national attention."

The exhibition covers 19,000 square feet of gallery space around the museum, outside on the grounds and around the Bentonville square. "State of the Art" was announced in November, on Crystal Bridges' second anniversary. The museum opened Nov. 11, 2011, with a contemporary art exhibition, "Wonder World", which encompassed contemporary works for the museum's permanent collection.