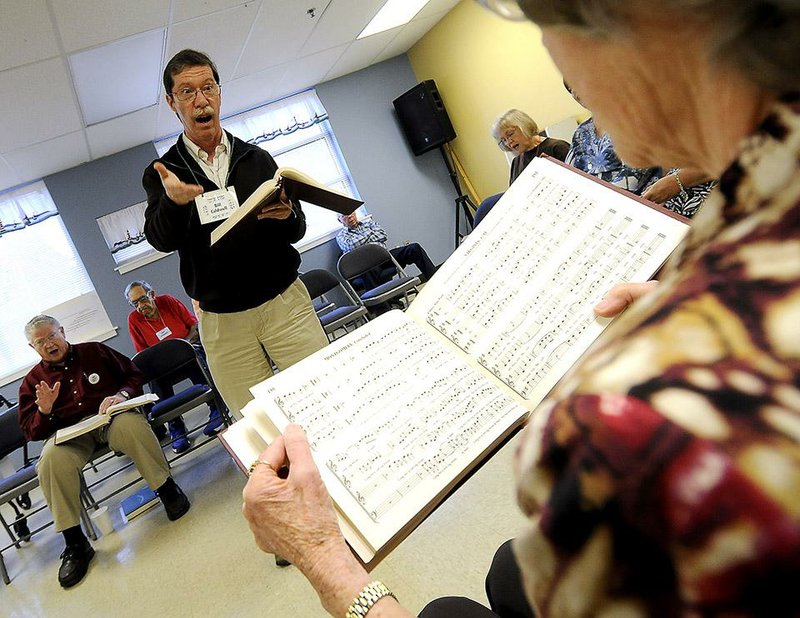 The voices carried the tradition-rich songs into the present day, the singers enthusiastic even with what were at times unfamiliar lyrics.

"I have never said the word 'dither' before," a woman exclaimed during a brief break between songs.

About 20 singers gathered Saturday in Springdale for the Northwest Arkansas Sacred Harp Fall Singing Convention, an event devoted to a style of music with deep historical roots.

Dan Brittain, a singer and composer in what's known as the sacred harp style, said the music can probably be traced back to church singing in the early 1700s.

Influential songbooks written in the 19th century provided plenty of songs to sing. Distinctive features of the style include songbooks featuring notes written in four shapes -- a triangle, circle, square and diamond.

On Saturday, singers formed a square, seated to face the song leader, who stood in the center.

The style produced powerful results. Every sacred harp song begins with musical notes that rise and fall for about 30 seconds before the the first lyric is sung, verses typically heavy with religious references.

Often, a song leader would say, "Let's pick it up," and the voices would soar with a bit more tempo. The conference, held in an activity room of First United Methodist Church, could be heard well into the hallways of the church building.

In its heyday around the 1950s, sacred harp singing "was kind of the social activity of the rural South," Brittain said.

In the United States, the Primitive Baptist congregations -- which generally eschew musical instrumentation -- and other religious groups embraced the style.

"This was entertainment as well as kind of being a religious experience," Brittain said.

He discovered it in the 1970s, when there were fears the style might disappear altogether. But revivalists have kept the tradition alive, including in Northwest Arkansas. Brittain was one of the early members of the Shiloh Sacred Harp Singers of Northwest Arkansas, which formed in 1999.

The group meets on the second Sunday of every month at the Shiloh Museum of Ozark History in Springdale.

Brittain, who traveled to Springdale from Harrison for the event, said the style has never been about displaying virtuoso talent, with singers mostly "just average people that like to sing."

While singing took place historically in churches, there also were singing schools with travelling instructors sent to communities to teach the style, Brittain said. He has traveled overseas to do similar work, recently leading a workshop on sacred harp style in Poland.

The Northwest Arkansas group held its own singing school Friday, an event that drew some new visitors to participate in the singing, Brittain said. "Participation" is the right word, he emphasized.

"We don't perform," he said, describing the style's ethos as always being about creating a group event.

Bill Caldwell traveled from Joplin, Mo., to attend Saturday's convention. He said he's been traveling to northwest Arkansas to sing with the sacred harp group almost since it began.

"Because it is such a visceral music, it is very cathartic in that sense," Caldwell said. At times, song lyrics touch on death and dying, but the fellowship of the group keeps it from being depressing, he said.

"When you sing about it, you face it and take that burden off your shoulder, so to speak," Caldwell said.

Most of the singers Saturday were over 50, some much older. One woman who said she was 83 thanked the group for their well-wishes during a recent illness. A few much-younger singers were part of the group as well, however, and Caldwell described the group as attracting eclectic participation over the years.

"The music evens out differences between people, and you begin to accept people for who they are," Caldwell said.

Monthly gatherings include three or four hours of songs, Brittain said. Saturday's event was scheduled to go twice that long, with three tables full of snacks like shrimp, pie and cake set up in the morning for a lunchtime break.

"You can't sing at the top of your lungs for six hours a day and share meals with people and then worry about arguing or anything," Caldwell said. "It breaks down barriers between people."