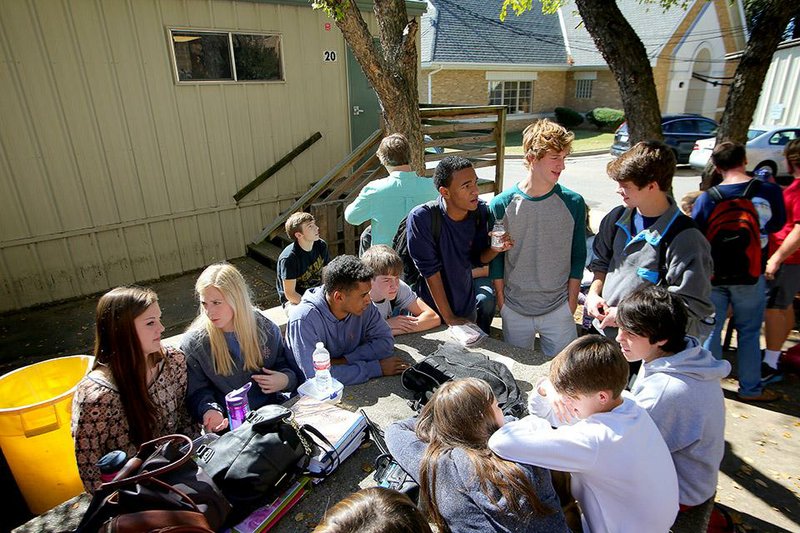 Central High School seniors eat lunch Tuesday next to some of the 21 portable classrooms on the south side of the Little Rock school. Principal Nancy Rousseau has said she’d like to see the portables replaced with a new science and technology building.

The results of a school facilities study commissioned by the Little Rock School District generated conflicting descriptions of "exciting" and "incompetent" at a public forum Tuesday at Central High that became combative at one point.

Rep. John Walker, D-Little Rock, told members of the consulting team that did the year-long assessment of the current school buildings and the district's future building needs that their study was incompetent. He had made a similar remark at an earlier forum at McClellan High.

"I'll do all that I can to try to prevent it from going into place," Walker told Carl Baxmeyer, director of the Solutions Group for the Fanning-Howey architecture and engineering firm of Indianapolis that led the multiagency review of the campuses.

The study proposes districtwide repairs, renovations, expansions and new buildings that would cost nearly $500 million if all were to be done. The School Board is expected to begin meeting in early November to identify and prioritize projects that would likely have to be funded with a voter-approved property tax increase.

Walker's remarks Tuesday followed questions from the audience about whether the projected $28 million to $31 million cost for repairing, updating and expanding Central High took into account the fact that the 87-year-old school is a historic landmark and the main feature in a U.S. National Park.

As such, materials for repairs and updates at Central -- particularly in the original building -- must conform to the higher standards necessary for preserving the character of the building, said Jody Morris, a Central High park ranger who attended the session.

Walker, a civil-rights lawyer who has spent much of his 50-year legal career representing black students in the Little Rock district, questioned Baxmeyer about how the consultants could produce a competent study without knowing the special requirements for Central.

Baxmeyer said that perhaps "more of an adjustment" should have been made estimating the costs for Central in light of that but said that the consultants knew it was a historic building. He said all the estimates in the study are high to guard against actual construction costs coming in at higher than expected amounts.

"You should have at least known that there were other things ancillary and related to it that should be taken into account," Walker responded. "You don't just go and ask a few people who have no historic connection to this school," he said and added that Dunbar Middle School, a former high school for black students, also has national historic designation.

"You all are treating it like it is something that can just be thrown away," he said of the landmark campuses, and he said a second facilities study needs to be done that is "based on reasonable criteria" and doesn't "throw away" schools, including Carver Magnet Elementary that the consultants initially proposed be used as a preschool center on the city's east side. They have since pulled that recommendation back.

Little Rock School District Superintendent Dexter Suggs, who also was at the forum attended by about 25 people, attempted to interrupt Walker, walked across the room to Walker's seat and asked him to leave.

A Central High parent interjected telling Walker: "Sir, we want to learn. This is our one chance to listen to him so that we can create a judgment in our own minds just as you already have. With your talking we can't hear," the parent said.

Central High Principal Nancy Rousseau told the audience that the school, district and National Park Service routinely work together to plan and pay for repairs at the school. She said that the $31 million estimate for upgrading the school is a "squeak" compared with other estimates for the school. The facilities study has proposed adding up to 50 classrooms at Central.

Rousseau said at the onset of the forum that the structural needs at the 2,500-student school are constant and seem insurmountable. Not the least among the structural needs is a replacement building for the the school's 21 portable classrooms, which Rousseau said she would like to see replaced with a permanent science and technology classroom wing.

Jay Gadberry, a member of the Tiger Foundation that supports Central, welcomed the consultants' work Tuesday, saying that the information presents a way to maximize educational opportunities at the current schools.

"I'm excited about what all you have got going on here," Gadberry said. "It sounds like a lot of money ... but it's a 10-year project. This is something we can all get behind to make our schools significantly better."

The final forum on facilities will be at 6 p.m. today at Parkview Magnet High School, 2501 John Barrow Road.