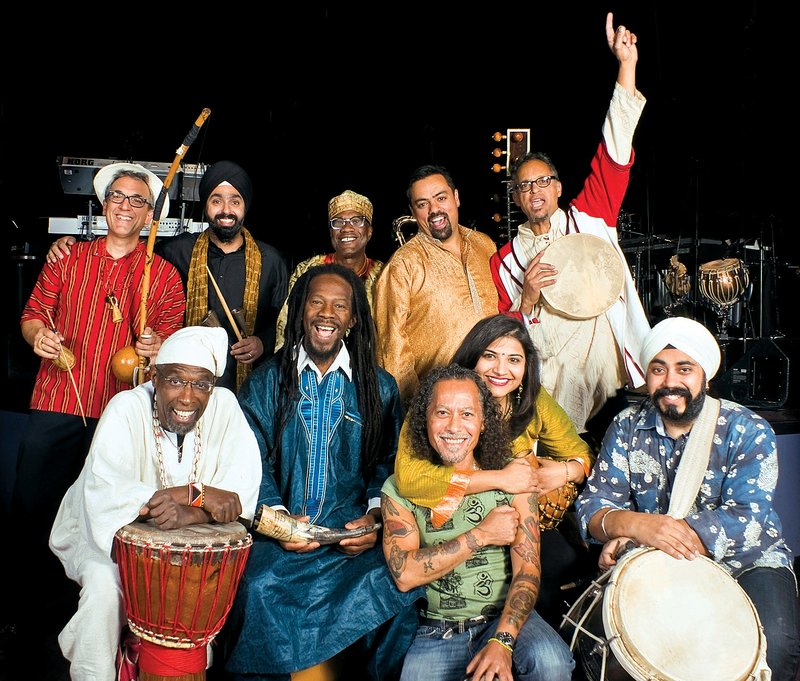 Take various types of Indian music, such as Bollywood or bhangra, and stir in some reggae, funk and Caribbean sounds, says Rahul Sharma, and the result is Funkadesi. The band -- Sharma says he sometimes likes to call it "just a 21st century American garage band" -- kicks off this season's 10x10 Arts Series tonight at the Walton Arts Center.

Based in Chicago, Funkadesi formed in December 1996. Although there have been a few changes, most the members have been part of the band for more than 10 years years, Sharma says. The members come from varied backgrounds, ranging from Indian to African-American to Latino. Sharma says the name Funkadesi is partially inspired by one of his favorite bands, Parliament Funkadelic, and also by the word "desi," a Hindi term that means countryman. When someone from India or Pakistan says that person is a desi, they mean that person is Indian, he says.

Sharma, 45, says his parents were born and raised in Kenya, but his ethnic heritage is from north India. He was born and raised in Kalamazoo, Mich., but he traveled to Kenya with his Indian relatives and visited with the Indian community there. This piqued his interested in the culture, but "it wasn't until college that it really hit me that it's important for me to know more about my ethnic heritage," he recalls.

At the time, Sharma was playing funk and blues music on a bass guitar, and he decided he wanted to study Indian classical music, which led him to the sitar. He has now been playing bass guitar for about 30 years and sitar for about 20.

The group features several instruments, including sitar, congas, flutes, saxophone, keyboard, guitar, bass guitar, a west African drum and a "dhol," which is a north Indian folk drum that is very festive and used in dance music, he says. The two lead vocalists are a Jamaican man and an Indian woman, he adds.

The band mostly plays original songs but performs some covers, among them Bob Marley tunes. Sharma says they often "freak some people out" during a Punjabi song with a reggae groove to it.

"We out of nowhere jump into 'Sweet Home Alabama,'" he says.

Before the show, there will be an interactive workshop featuring drums from around the world, during which the band's drummers will talk about their rhythmic traditions, Sharma says.

Sharma hopes people will come to the show because the band crosses genres and is high energy and interesting to watch.

"I don't think people have seen too many times dreadlocks and turbans and men and women on stage together having quite the party we're having on stage," he says.

He believes the show is almost like a cleansing, and people will leave feeling positive.

"I think the most important thing is people feel the joy."