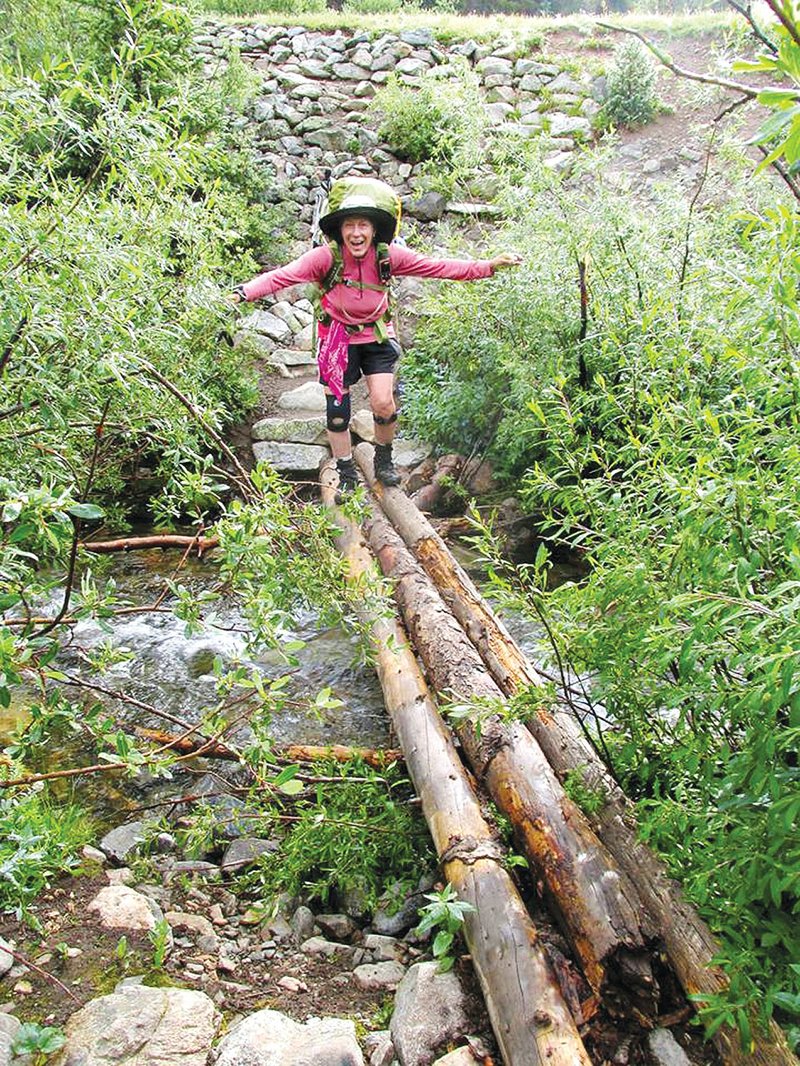 She described the moose as a "presence."

She was approaching the saddle of San Luis, a 14,000-foot peak in the San Juan Mountains of Colorado. She was about 10 miles north of Creede and thoroughly enjoying the rare wilderness of this high trail. She was walking quietly, which was not uncommon. Being on the trails alone, she had become accustomed to keeping her own thoughts, and this day was no different. A few weeks before, her hiking partner had dropped out of the 500-mile trek after an injury. Friends she had met along the way kept different paces. She had a lot of time to think.

the cold wind that blows

Not of loss or loneliness,

But the cold wind of the high places,

of those moon-like mounds

that cannot grasp even the smallest part

of what it means to be a mountain

or a mountain range.

She doesn't remember exactly what was on her mind that day, but she felt a sense of calm and peace as she often did on those solitary treks. At least, she felt calm until she saw him.

Rounding a willow as she came down the trail, Bella Vista resident Mary Catron came face to face with a bull moose standing only six feet away.

"Standing there staring at me was an enormous, healthy, beautiful brown-black bull moose," she said. "His eyes grew wide with surprise and fear, and so did mine. We stared at each other like this momentarily, and then he began to run sideways away from me."

But the moose didn't simply leave as she hoped, she said. The moose suddenly turned back toward her and began to rush the hiker.

"Moose can whirl and be on you in a second if they feel you're too darned close," said Kristine Rines, wildlife biologist with New Hampshire Fish and Game. "You should be far enough away to get behind the nearest tree before a galloping horse could get there."

Catron unfortunately was not. As the moose rushed her, the lone hiker raised her hiking poles above her head and began to yell at the top of her lungs. Luckily, the moose stopped its charge, and as she describes it, strolled off into the willows away from her.

"For the rest of my time struggling upwards through the willows to the pass, I played music on my iPhone to alert in critters lurking in the willows," she said. "A deer stared at me for many minutes like I was a very strange creature. That night I camped in the open far away from any trees or willows and watched the sunset over San Luis Peak.

"Luckily, the black bears in that area are rather shy," she concluded.

Majestic spruce we thought you ageless,

Mary Catron was not new to hiking when she started her 500-mile trek across Colorado. The Oklahoma native began hiking more than 30 years ago, taking short day trips on area trails. The former ballerina turned registered nurse found a passion in hiking, becoming part of nature and finding a peace and purpose she couldn't find anywhere else.

"I have been doing it for many years, and I don't know how to describe it," she said. "To me, it's a very physical experience, but it also does something to me that I don't get from ordinary run-of-the-mill life. I will knock myself out to get into the wilderness. I just drink it up. Colorado is my spot."

"We were out on a hike one day, and she stopped and said, "God puts on quite a show, doesn't He," said her husband, Mel Catron. "I think for her, it is all about experience. Just to be there and part of it. The point is is that there are no words to describe it."

Mary Catron set out on the Colorado Trail this summer with plans to hike the mountainous terrain alongside hiking buddy and brother-in-law 73-year-old Mitch Catron. With support from Mel, the three started preparing for the backpacking trip a year before, planning out distances, supply points and food for every segment of the trip, she said.

The group brought two large barrels of backpacking food along, taking careful note of nutritional value and weight. "We averaged 30-35 pound packs for me and a 40-pound pack for Mitch," Mary Catron said. "Food is very heavy even when packing light, and water is 2.2 pounds per liter. I experienced having too much food and too little, finally hitting a nice balance most of the time in the last 300 miles."

Along with food, the pair carried a tent, sleeping bags, mattress, rain gear and warm clothing as well as a water purifier and map, she said. Mel dropped Mary and Mitch off at Waterford Canyon Trail at 5 a.m. June 23, and they set off.

We have awakened to your demise.

Our memory of your tall green dominance

"I was enjoying my time in the trailer with my dog when they started having trouble," said Mel Catron. Mel was a constant support for Mary and Mitch, waiting at trailheads in case of an emergency -- which would eventually arise.

The hike was going according to plan until mid-July when the pair experienced their first misfortune that would leave Mary hiking alone.

After hiking the Kenosha pass and stopping to visit Mel's son and daughter-in-law in Breckenridge, Colo., Mitch and Mary continued their trek across Gold Hill to Copper Mountain before turning to Mount Massive, an aptly named 14,000-foot peak in the Sawatch Range. Coming down a the mountain, Mitch tripped and fell, damaging his clavicle in the fall. The two hiked out three miles before meeting Mel, she said.

"I took him to the hospital, and sure enough he had a chip," Mel Catron said. Mitch had a literal chip on his shoulder, delaying the pair for one week of healing time.

Believing they were out of the woods so to speak, Mitch and Mary continued the trip until disaster struck again.

"Mitch is someone who seems invincible," said Mary Catron. "But the second fall took him out of it. Mitch slipped in a creek and hit his injured shoulder again. He had reservations for treks in Nepal and India and really needed to let his shoulder heal completely."

"He wasn't going to let a shoulder injury stop him from going on that big trip," said Mel Catron with a laugh. "I think he would have gone on had it not been for the fall and injury. He'd say so, too, but he's in Katmandu as we speak."

Mary, with the support of Mel Catron, rallied and continued the trek alone.

We were here to see your fullness.

We slept among your shadows.

We reveled in your beauty.

Mary walked for eight days on her own without resupplying by husband Mel Catron.

The lone hiker traveled over 100 miles in that time on passes topping over 12,000 feet. The atmosphere decreases as a person gains elevation, said Carol Roberts, host of informational webpage Hiking Lady. This means there is less oxygen available to breathe and circulate through the body. Hikers are required to acclimate to the environment, slow their pace and hydrate, she said.

"Doing something like the Colorado Trail is like having a job in a way," Mary Catron said. "The stresses are different, of course. But you have to plan ahead, plan your food, your pack. Be sure you're going to have enough water and have a decent camp spot picked out. There's always this urgency that 'I have to get here.' I can't just throw my body down the trail. I have to take care of myself to get through. So all these things are on my mind."

Solo hiking can be precarious, Roberts said. Hiking at high altitudes can lead to altitude sickness, an uncomfortable and potentially dangerous condition causing headache, lassitude and nausea, she said.

The result, particularly for a solo hiker, is disorientation which can lead to death on the mountain.

"I had heard rumors that they had found someone up there while I was hiking," Mary Catron said. "I couldn't find anything in the papers about it, but I wouldn't be surprised. It gets cold. It would be very easy to die of exposure."

"She woke up one night, and her tent was frozen," said Mel Catron. "It may be the middle of the summer, but it gets cold at night. So if you don't know what you're doing, you could be in for a lot of trouble."

When we are grey, brittle and broken,

we will think of your presence as heaven.

After a night of rain and harsh gusts, Mary Catron broke camp late at 10 a.m. on Sept. 9, and she walked the remainder of the day in the rain. Cold and exhausted, she made camp. Rising early on the tenth, Mary trekked 13.5 miles out to Junction Creek where Mel Catron and her dog Ofi were waiting.

She had completed the 500 mile hike across Colorado.

"I'll tell you, I was getting really tired of myself," she said with a laugh. "I think this is true of most people: My mind just rattles all the time. There's something rattling around in there. Sometimes it's not very positive. I worried a lot. You spend so much time on the trail, and you start thinking that this isn't peaceful. But then I started to relate to my surroundings."

Despite the trials and tribulations, the injuries, loneliness and threatening environment, Mary Catron had done more than check something off her bucket list.

"I saw and experienced things every day and all day long that were just stunning," she said. "There are incredible rock formations and vistas. As we got higher and higher, there are incredible flowers. I might be going around thinking of ordinary stuff and then I see something that makes me stop and say, 'Whoa.' I constantly ran into miracles."

Blown away, the retired nurse looks forward to her next adventure: an autumn at Mesa Verde with Mel and Ofi where she will leave behind the "sculpted mayhem" of the forest and try her hand once again at the red-faced shale the couple is so fond of.

"I can't wait to put myself back in the middle of the wilderness," she said. "To say I am blessed is an understatement. I am also blessed to have excellent health at the age of 65. I am blessed to be loved by my husband and my family. This love was my anchor throughout."