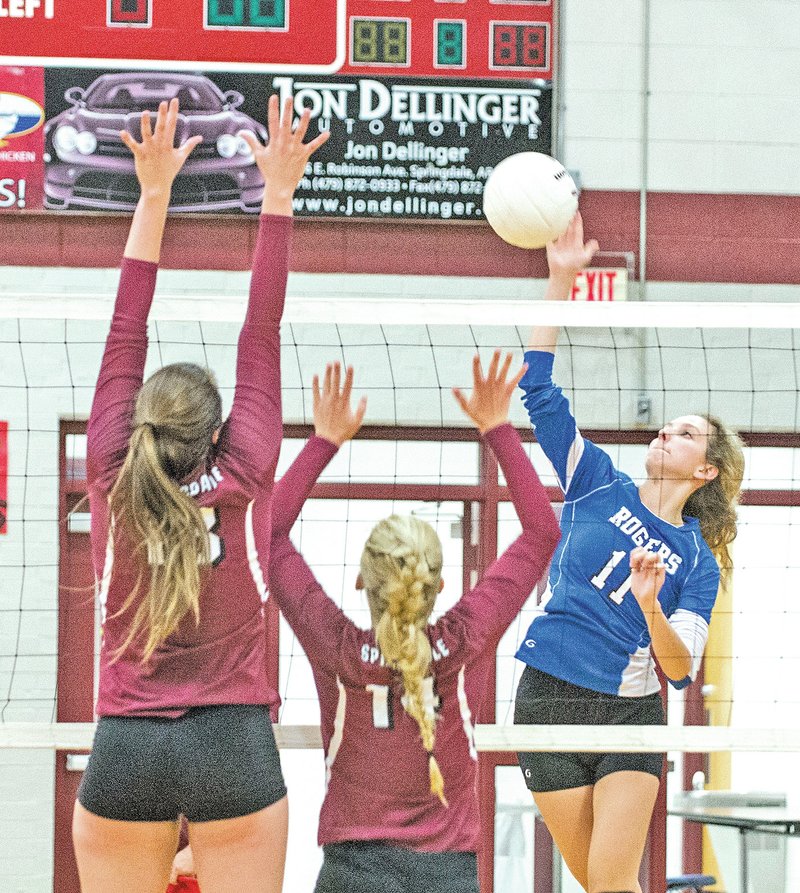 The Lady Mounties came through in pressure situations to pull out an important 3-0 (25-23, 25-18, 26-24) road win at Springdale High, a victory in a match with big postseason implications.

The Lady Mounties entered the night sixth in the conference, with Springdale a game back in the standings. The win gave Rogers (9-8, 3-5 7A-West) a sweep in the season series and a commanding two-game lead over Springdale as the second half of league play started.

"We still have some hurdles to get over, but we needed tonight," Rogers coach Jeana Breedlove said. "In order to at least maintain that spot, we've got to win two more matches. Tonight was one of them and now we need one more match and we're sitting in sixth place, unless there are some upsets."

Rogers led most of the first set and fended off a mini-rally from Springdale, winning the game on one of the Lady Bulldogs' five service errors in the set. The Lady Mounties cruised to the 25-18 win in the second game, then outlasted Springdale in a back-and-forth third set.

There were 16 ties in the final set. Springdale took a 24-23 lead, but Rogers ripped off three quick points to win the match. The Lady Mounties were able to do a good enough job controlling Lady Bulldog big hitters Desiree Mack and Ryann Goodsell to earn the victory.

"The girls responded really well, because tonight our defense is not what we usually run," Breedlove said. "But I knew the only way for us to beat this team would be to gang up on their two hitters and try and stop them from using their power swings. That was our goal."

Mack still finished with a match-high 16 kills, while Goodsell had four. It was another tough, emotional loss for Springdale (6-12-2, 1-7), which had its postseason chances take a sizeable hit with the loss.

"We fight our own battles," Springdale assistant coach Reed Fogleman said. "It's hard to beat another team when we're fighting our own battles. We beat ourselves more than any team could beat us."