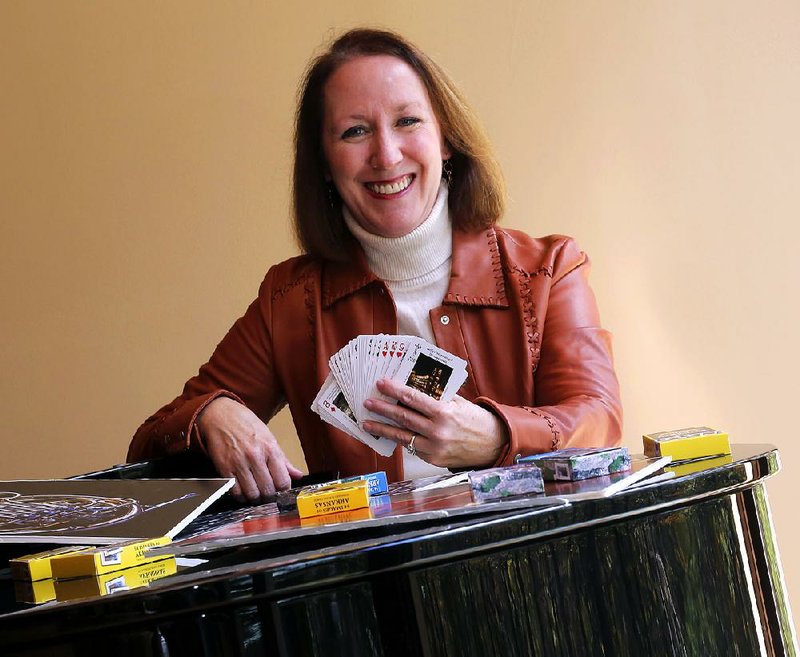 Nancy Cole and Camille Williams have 216 reasons for people to support the Arkansas Symphony Orchestra.

The two women are co-chairmen of the orchestra guild's playing card fundraiser. The idea is 216 images of Arkansas landmarks and vistas, festivals and institutions: enough to illustrate four decks of playing cards.

More, actually -- each $10 deck comes in a choice of two sizes, standard and bridge. The bridge cards are a little smaller. Bridge players hold more cards than, say, poker players or in Williams' favorite card games, hearts and spades.

"They're full-color, they're beautiful, and each one is a little souvenir of Arkansas," Williams says.

"The cards in each deck reflect a bit of everything that makes Arkansas so amazing," Cole says. "We have found that folks are proud to call Arkansas home, and excited to share a bit of what makes the state great by giving such a unique gift."

One card, the jack of clubs, shows a section of the Arkansas Symphony Orchestra. The caption notes the orchestra's 30 Masterworks, Pops! and Chamber Music concerts each year, and that its school programs "reach 24,000 children in the state."

When the symphony plays a concert, Williams says, "we're out in the lobby selling cards."

Williams sponsored a card for soy farming in memory of her father, Louisiana soybean grower Larry Bundrick. For Cole, the special card is Central High School.

"The teachers and administrators at Central have been a significant influence in our children's lives," Cole says. "So the school seemed like a perfect site for us [her family] to sponsor."

The guild solicited sponsors for each of the cards, Williams explains: $100 for a number card, $150 per face card. This done, they could have called the project already a success. But their goal is more: at least $50,000 for the symphony.

Their strategy is the opposite of a one-time, big-money fundraiser, Williams explains. They wanted to offer the symphony guild's 300 members -- the audience, too -- something everybody "could get in on at a price point they could afford."

The job started in June 2013, when they heard about a similar project that proved successful for the Gulf Coast Symphony Orchestra in Gulfport, Miss. There, the project team "snapped photos with their iPhones" to have pictures to go on the cards, Williams says.

She and Cole turned to the Arkansas Department of Parks and Tourism, which supplied most of the images they needed.

Even so, being a camera hobbyist, "I crisscrossed Arkansas taking photos that parks and tourism didn't have," Williams says. Some shots came from other sources.

"Great effort was expended to try and be sure every detail was addressed," Cole says.

The project dealt challenges unique to assembling a deck of cards. For one -- what to make of the joker? Symphony conductor Philip Mann might be a card, but the symphony guild is not about to call the maestro a joker.

Solution: A sketch loosely represents the music director on each "wild card," rounding out the decks for a total of 216 -- and more. Each deck comes in a choice of four backs, one for each section of the orchestra: woodwinds, percussion, strings and brass.

"The reaction to the cards has been extremely positive," Cole says. "Arkansas is such a beautiful state rich in history, breathtaking natural sites, points of interest, cultural offerings, recreation and festivals."

Among the cards in one deck: the William J. Clinton Presidential Center and Park, Little Rock's River Market District, the state's rice industry, the Boston Mountains Scenic Loop, University of Arkansas for Medical Sciences, Donald J. Reynolds Razorback Stadium -- everything to brighten even a game of 52 card pick-up.

"Everybody wants the ace of spades or the king of hearts," Williams says.

But in this game, every hand is a winner.

Arkansas Symphony Orchestra playing cards are available (for $10 a deck) in Little Rock at Catering to You, Rhea Drug Store, Domestic Domestic, The Green Corner Store, Reflections Spa and Salon, The Yarn Mart and Reinvented Village.

More information is available at arkansassymphony.org/playing-cards.