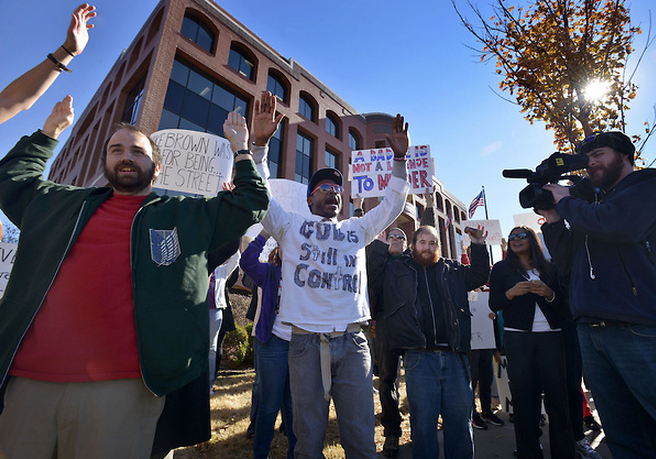 Around 80 protesters in Fayetteville joined others across the county Tuesday in decrying a grand jury’s decision that a Missouri police officer shouldn’t be charged with a crime in the shooting death of an unarmed black teenager.

Four people were arrested during the Fayetteville demonstration after they briefly halted traffic on North College Avenue at the Dickson Street intersection shortly after noon. The demonstrators called for an end to what they said was systemic police brutality and racism, with all agreeing Darren Wilson, a police officer in Ferguson, Mo., should have faced charges for killing Michael Brown in August.

“It boils down to a man got away with murder because he’s white and carries a badge,” said Misty Bowers, a white woman who was among the first protesters to arrive. She pointed to a fellow protester: “If I had done that, or she had done that, we would’ve been arrested immediately.”

The crowd held signs emblazoned with “Black Lives Matter” and other slogans while chanting “Hands up, don’t shoot,” a common refrain during the Ferguson protests, and “I’ve got my hands above my head, please don’t shoot me dead.” Several of the protesters tied the controversy to other human rights issues, such as discrimination against gay, bisexual and transgender people, immigration, Native American rights and even the ongoing Syrian civil war.

Around 12:30 p.m. Jared Carter, Jane Stitt, David Garcia and Nik Robbins knelt in front of northbound traffic on North College, bringing the intersection to a halt for several minutes.

“I’m not going to stand for kids being killed in the streets,” Carter said before walking out into the crosswalk.

Sgt. Shannon Gabbard with Fayetteville Police stood in front of the four and told them they could leave without being arrested. The four refused. Four other officers then walked up behind them, had the four stand up and calmly handcuffed them. They were arrested in connection with disorderly conduct and taken to the Washington County Detention Center, police spokesman Sgt. Craig Stout said.

“There was quite a bit of dialogue between the OMNI peace folks and Hands Up Northwest Arkansas and our special events coordinator,” Stout said. “This was all planned out in advance.”

Across the street from the protesters, Don Preece held a small sign calling Wilson a hero.

“I think that this is ridiculous — the guy was cleared of any wrongdoing,” Preece said. “The officer was doing his job. It’s unfortunate, but you don’t attack a police officer.”