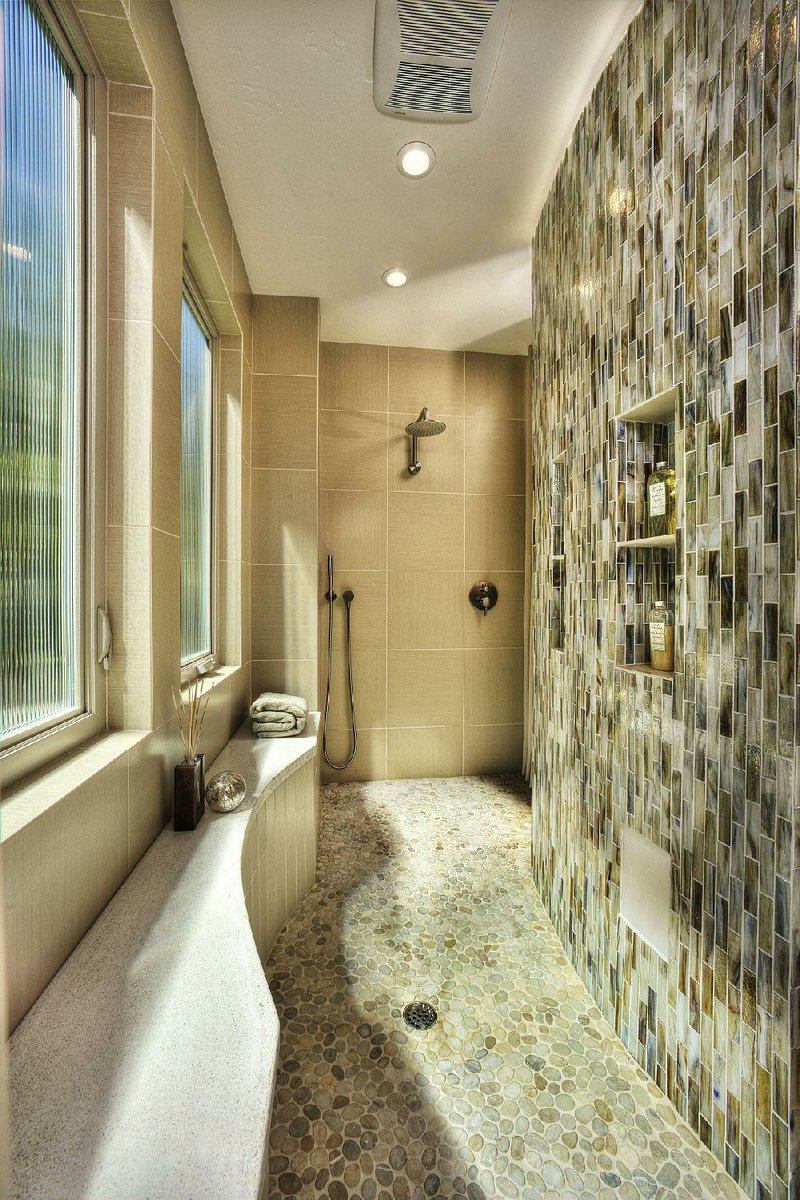 The time when bathrooms were simply for bathing and getting ready to face the day is long past. Homeowners today want spalike retreats so when they get a chance to remodel an outdated bath, they look for color schemes, fixtures and features that offer comfort, relaxation and luxury.

Top bathroom remodeling trends for 2014 include soothing shades of gray and white, curbless showers, easy-to-clean features, minimalist lines and open spaces, according to the National Kitchen and Bath Association's 2014 design trend report. This year, the group estimates people who take the plunge will spend $5,000 to $30,000 or more replacing dated fixtures and revitalizing tired color schemes.

The association's lowball $5,000 redo might include basic changes such as replacing faucets and countertops while $25,000 to $30,000 could cover a complete overhaul with a new tub and/or shower, cabinets, flooring and countertops, says Bill Wrape, owner of Distinctive Kitchens and Baths in Little Rock.

Almost 50 percent of people planning a bathroom project are motivated by a desire to upgrade features and fixtures while 37 percent want more functional spaces, according to home design website Houzz.com's 2014 bathroom remodeling survey. Overall, the Houzz and National Kitchen and Bath Association reports show that people are adapting the bath for lifestyle changes or "aging in place." Among those are baby boomers and empty nesters considering their future needs, a trend supported by an AARP report that says 90 percent of people age 50 and older plan to stay in their current homes indefinitely.

Aging in place design includes nonslip floors, taller sinks and vanities, and safety bars in the

shower or above the tub. Older homeowners are also increasingly replacing tubs with large, curbless showers with benches.

Take a look at a few of the steamiest bathroom design elements.

"Showers are really driving the market now," Wrape says. If redoing a small bath, homeowners typically choose to replace the tub with a large walk-in shower. When space is available, however, they want a separate tub and shower.

Andrea Eskola of Kitchen and Bath Concepts in Little Rock says clients are asking for the largest shower they can get and want it to include a bench and two shower heads -- one on the wall as well as a handheld model near the bench. A handheld shower head makes it easier to clean the shower, which is another primary consideration in today's bathrooms -- ease of maintenance.

Many homeowners prefer curbless showers that are level with the bathroom floor, which means there's nothing to step over when getting in and out of the shower, Wrape says. A curbless shower also means a tile floor can flow smoothly into the shower for a clean, contemporary look. No-threshold showers require some modifications to the bathroom floor so they usually aren't installed on houses built on concrete slabs, Wrape says.

When it comes to tile choices, Wrape and Eskola say, the bigger the better. Why? Larger tiles mean there's less grout to keep clean.

People who have space for a tub and shower prefer freestanding tubs to built-in or alcove tubs. While the tub may not get much use, people want sleek, curved models with sculptural appeal or traditional clawfoots that are long enough for a relaxing soak, according to Houzz.

Wrape says when his clients ask for a freestanding tub, they want one that offers hydrotherapy features. While some still prefer tubs with whirlpool water jets, the hot tub of the moment is the MicroSilk, which creates tiny "microbubbles" touted to open pores and soften skin. MicroSilk tubs range from $3,000 to $8,000.

In showers and baths, safety or grab bars are becoming standard. They've evolved beyond the clunky, institutional look associated with hospitals and nursing homes, Eskola says. Modern grab bars may be angular or curved to fit into a bathroom's style, whether contemporary or traditional. They're crafted of wood and burnished metals as well as acrylic in a rainbow of colors.

While people are bold with their color choices in other parts of the house, for the bath they want neutrals that add to a spalike atmosphere where they can wash away the stress of the day. The National Kitchen and Bath Association report says homeowners prefer beige and bone color schemes, but gray is quickly overtaking those as the neutral of choice.

"Gray is the hottest color now," Wrape says, "It's very inviting and it's not overwhelming. People want a very calming finish in their bathrooms."

White is still the top color choice for toilets, tubs and sinks while black has become the least popular.

In keeping with the desire for greater comfort and accessibility in the bath, the appeal of 36-inch-tall sinks and vanities has heightened to the point that traditional 30-inch-tall sinks are almost things of the past, the kitchen and bath group survey says.

"People like taller sinks so they don't have to bend down to wash their faces or brush their teeth," says Andi Stephens of Kitchen Distributors in Fayetteville. Stephens, who designs cabinets for kitchens and baths, says she's also getting more requests for floating vanities. Unlike traditional vanities that rest on the floor, floating vanities attach to the wall and "float" 8 to 12 inches above the floor.

Regardless of vanity style, people are washing their hands of "vessel" sinks that rise above the vanity in favor of "under-mount" sinks installed in solid-surface countertops.

Because the sinks are mounted under the counter instead of being dropped in from above, they don't have a lip on the countertop, which makes counters easier to clean. Under-mount sinks also offer more flexibility about faucet placement -- for example, the faucet can be installed to one side instead of in the middle behind the sink.

In the vanity itself, Stephens says, the trend is to add electrical outlets to niches and drawers so people can keep their hair dryers and curling irons plugged in but out of sight when not being used.

Quartz is the new granite when it comes to materials for solid-surface countertops, which are made of a single seamless piece of hard stone or stone-like material, according to the National Kitchen and Bath Association report. For years, homeowners have favored granite countertops, but its porousness makes it high maintenance and prone to chips and cracks. Also, granite has to be resealed periodically to retain its luster. Instead of being a solid piece of stone, quartz countertops are engineered by crushing quartz into fine crystals. The crystals are combined with polymer resins and pigments, then poured into molds to create countertop-size slabs.

Quartz never needs to be sealed and won't lose its shine, Wrape says, adding that 90 percent of his clients prefer it to granite because it also resists stains, chips and cracks. Quartz also is comparable to granite in price, ranging from $75 to $180 per square foot.