Cher sounded as good as she looked 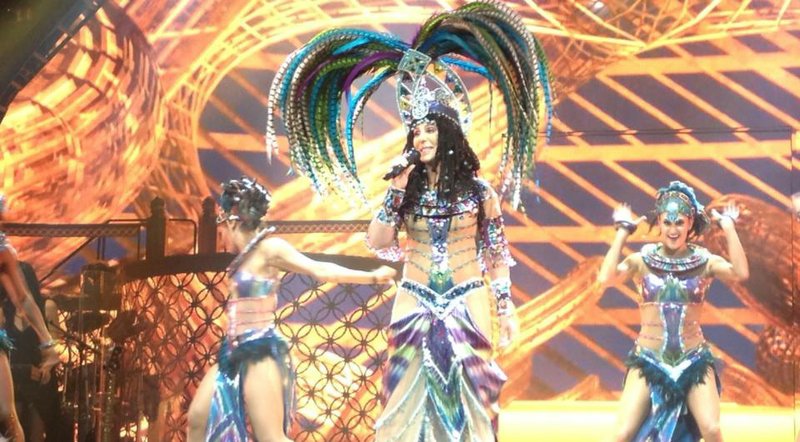 Midway through her Dressed to Kill Tour stop at North Little Rock's Verizon Arena Friday night, Cher's distinctive warble had an emotional choke as she belted out "You Haven't Seen the Last of Me."

But we have seen the last of her, insists the 67-year-old singer who last visited central Arkansas during her so-called farewell tour back in 2002. And then again in 2003.

"I have to tell you, this is the last — this is my last — farewell-farewell show, OK?" Cher told the crowd of 12,119 fans during the first of several chat and Dr Pepper breaks. "If I come back again, I'll be my mother, alright?"

Speaking of her mother, Cher mentioned the Arkansas roots of her mother Georgia Holt (born Jackie Jean Crouch) who is a cousin to Arkansas First Lady Ginger Beebe. Cher also noted her great aunt was the first patient in Little Rock to undergo electric shock therapy.

"I'm the most sane one in my family," said Cher while wearing the Cleopatra-esque ensemble accessorized with a towering feathered headdress from opening dance numbers "Woman's World" and "Strong Enough."

But her costumes — nearly a dozen, complete with wigs and headpieces — were nothing short of crazy, from Indian regalia with a full floor-length feather headdress for "Half-Breed" to glittery golden goddess garb — and a large Trojan horse prop — for "Take It Like a Man." She might sing "If I Could Turn Back Time" (and did, while strutting in a skimpy bodysuit nearly identical to the one in the 1989 video), but her figure reveals she already has found a way.

She sounded as good as she looked during the nearly two-hour Vegas-worthy show with involved sets, with themes ranging from circus to burlesque. Recovering from foot surgery, Cher left the moves to her capable, cut dancers and acrobats who amazed with aerial stunts, and concentrated on performing a career retrospective spanning "Gypsies Tramps and Thieves" to "I Found Someone" to "Believe."

Many were the nostalgic video montages, some dating as far back as the Sonny & Cher days. Cher paid tribute to them and to her late ex-husband Sonny Bono, singing "I Got You Babe" in an endearing duet with his video image.

She ended on a more modern note, floating over the waving and photo-snapping crowd while singing "I Hope You Find It" from her 2013 album Closer to the Truth. Truth is, it's actually a cover of a 2010 Miley Cyrus song.

Opening the show was the "Invincible" Pat Benetar, who performed an hour set with her husband and collaborator Neil "Spyder" Giraldo, celebrating their 35th anniversary tour and 32nd wedding anniversary.

Before launching into power ballad "We Belong," Benetar announced, "This is the part when we sit down because we're old."

Not hardly, the 61-year-old Benetar demonstrated, rocking out to "Hit Me With Your Best Shot," "Love is a Battlefield," and later, as an encore, " Heartbreaker," merged with Johnny Cash's "Ring of Fire."