Home-rendering hog fat is easy, and cooking with it yields tasty results that are less harmful than its reputation suggests by Kelly Brant | March 26, 2014 at 3:25 a.m. 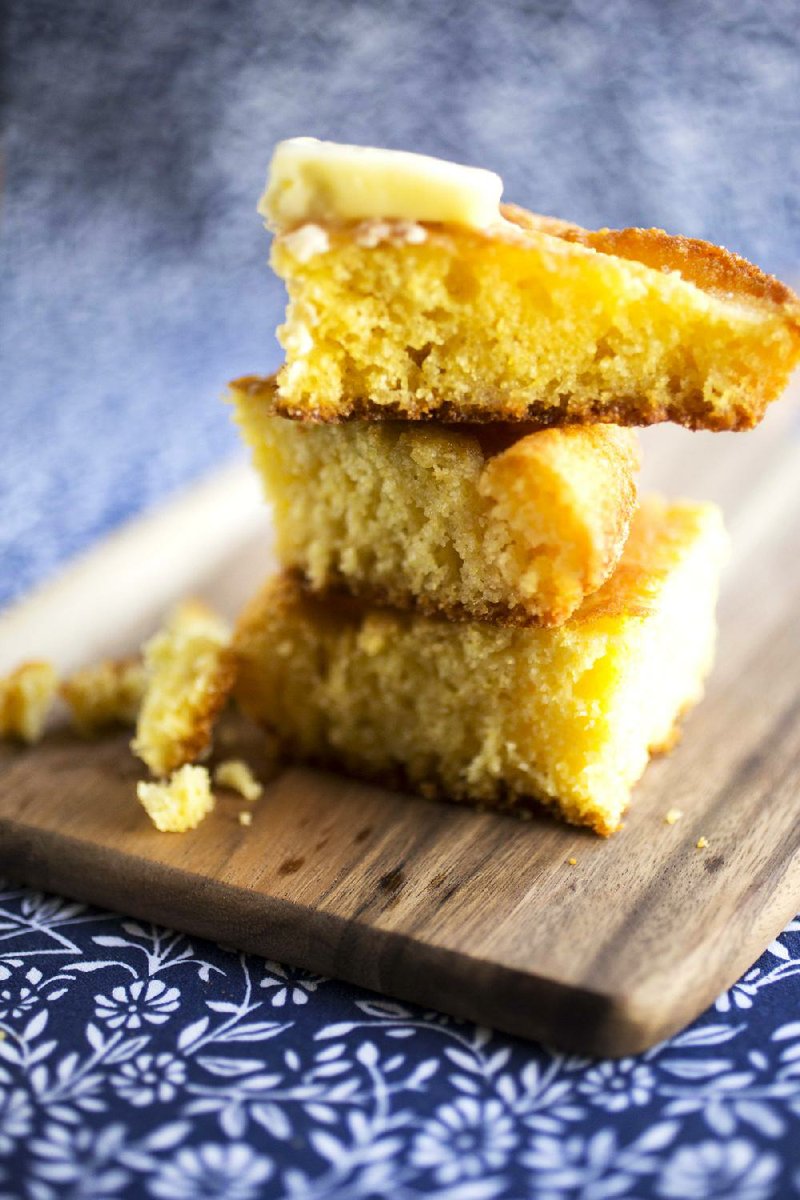 Cornbread made with lard has a light and tender texture and crisp crust.

There was a time when lard was the preferred cooking fat. In some households it was the only cooking fat.

And if you asked most Southerners not too long ago, it was irrefutable fact that lard was required for good biscuits, pie crust and tortillas.

But somewhere along the way lard lost its luster, taking on the role of villain.

But just like horizontal stripes, hip-hugger jeans and fondue, lard is making a comeback. At least among adventurous cooks.

As it turns out, the fat in its natural form isn’t so bad. Or at least not as evil as it was made out to be in the latter part of the last century.

It’s the processing - the hydrogenating, to be specific - that made lard the biggest baddie of the fats.

Now that trans fats have taken over the villain role, many cooks are turning back to lard for its superior results.

But not just any lard. Nonhydrogenated lard. Which means home-rendered lard. (The stuff you find in the grocery store on the bottom shelf near the Crisco contains preservatives and has been hydrogenated to make it shelf-stable.)

Rendering lard at home isn’t as unpleasant as it sounds, if you can get your hands on quality hog fat. We ordered some through the Arkansas Local Food Network, littlerock.locallygrown.net.

To find a local food club near you, visit locallygrown.net/markets/list. Or check with your local butcher.

For ease of handling, and thus the cook’s safety, it’s best to start with partially frozen or at least very, very well chilled fat. (As the fat warms it gets slippery). Cut the fat into small pieces - no larger than ½-inch cubes - the smaller the pieces, the faster the fat will render.

Of course this also means the faster the mixture will burn if you aren’t paying attention.

The idea is to heat the fat just until it liquefies. This is best done with slow, low heat.

I consulted several cookbooks and cooking blogs to prepare for my day of lard rendering. And I learned the fat can be rendered on the stove, in the oven or in a slow cooker. I found the oven and slow cooker methods provided the best results. Once rendered, strained and transferred to airtight containers, the lard should be frozen or refrigerated for best quality.

The next step was figuring out what to make with all that lard.

My first project was pie crust.

To determine if lard makes the best pie crust, as I’ve heard argued so often, I made crust using all lard, all butter, all vegetable shortening and, finally, a combination of lard and butter.

Upon first bite I immediately understood the appeal of an all-lard crust. It was unbelievably tender and flaky. Maybe too tender and flaky. The crust, which I filled with triple berry jam and baked like a mini hand pie, seemed to melt in my mouth. Maybe it was all in my head, but I also detected just the slightest hint of roasted pork. However, other tasters noticed nothing unusual about the flavor of the lard crust.

I cannot rank one better than the other.And there was no consensus among tasters in my informal experiment unleashed upon my family and co-workers. The shortening crust was most often described as “clean” and “airy.” And the tasters who much preferred the shortening crust had unfavorable, and rather harsh, words for the lard crust.

The only definitive statement I’ll make is that homemade - no matter if it’s from lard, butter or shortening - is better than anything that comes rolled in a plastic sleeve two-to-a-box in the refrigerator case at the grocery store.

Next up was skillet fried potatoes, or fried taters, as they were known in my house. The kind my grandmother made were a simple affair. Fat, potatoes and salt. I started with red-skinned potatoes, peeled and cut into 1 ½ inch by ½ inch rectangles about ¼ inch to1/ 8 inch thick. Next up was a generous spoonful of lard heated until melted in a large cast-iron skillet. Then I added the potatoes and let them cook, partially covered, over medium heat until brown and crisp on the bottom and beginning to soften on top. I flipped them, reduced the heat to low and continued cooking until they were tender. A generous sprinkle of salt and they were ready to serve. One bite and I was transported back to my Granny Tommie’s kitchen in Enola, Ark.

So, has lard replaced the other cooking fats in my kitchen?

No. I still keep a variety of fats on hand (including olive oil, sunflower oil, coconut oil and butter), but if I’m frying potatoes, baking a pie or making tamales, lard does it best.

Heat oven to its lowest setting, 175-250 degrees. Line a fine-mesh sieve or colander with cheesecloth and set it over a large bowl or spouted container.

Cut fat into small pieces no larger than ½ inch. Place fat in a roasting pan or deep, heavy oven-safe pot such as a Dutch oven.

Roast fat, stirring occasionally, until fat begins to melt; this will take about 30 minutes. When there is enough liquid fat to ladle, remove pan from oven. Ladle liquid into cheesecloth-lined sieve and strain. (This first pour will have the least amount of flavor and is best suited for baking and sweet endeavors. Transfer it to an airtight container and refrigerate or freeze until ready to use.) Return pan to oven and continue heating the fat, stirring occasionally, until all of the fat is rendered and you’re left with shriveled up bits of tissue in the pan. Transfer mixture to cheesecloth-lined colander and strain, pressing on the bits with the back of a spoon to extract as much liquid as possible.

Discard the solids. Transfer the liquid to an airtight container and refrigerate or freeze until ready to use.

Line a fine-mesh sieve or colander with cheesecloth and set over a large bowl or spouted container.

Cut fat into small pieces no larger than ½ inch. Place the fat and the ¼ cup water in the cooking vessel of a slow cooker. Cover and cook on LOW, stirring occasionally, until all of the fat is rendered and you’re left with liquefied lard and shriveled-up bits of tissue in the pan, about 4 hours. Transfer mixture to cheesecloth-lined colander and strain, pressing on the bits with the back of a spoon to extract as much liquid as possible.

Discard the solids. Transfer the liquid to an airtight container and refrigerate or freeze until ready to use.

In a spouted measure, combine water, vinegar and salt and stir until salt dissolves.

Place measure in freezer for 10 minutes.

Combine lard and flour in a mixing bowl. Using a pastry blender or your fingers, combine mixture until it resembles coarse meal.

Gradually add chilled liquid to flour-lard mixture and mix until dough comes together.

Press mixture into a disc, wrap in wax paper or plastic wrap and refrigerate 30 minutes to 2 hours before using.

In a spouted measure, combine water, vinegar and salt and stir until salt dissolves.

Place measure in freezer for 10 minutes.

Combine lard, butter and flour in a mixing bowl. Using a pastry blender or your fingers, combine mixture until it resembles coarse meal.

Gradually add chilled liquid to flour-fat mixture and mix until dough comes together. Press mixture into a disc, wrap in wax paper or plastic wrap and refrigerate 30 minutes to 2 hours before using.

For superior tamales lard is the way to go. The pork fat carries the other flavors in the dish - shredded meat, chile peppers, cumin - better than shortening, and the texture of masa made with lard is unbeatable.

2 to 4 whole chipotles in adobo

2 cups lard OR a combination of lard and shortening

For best flavor, do not remove skin from chicken.

Place chicken pieces and garlic in a large pot. Add water to just cover and bring to a boil over medium-high heat. Reduce heat to low, cover, and poach until chicken is cooked through, 30 to 45 minutes. Remove chicken from pot, reserving cooking liquid. Once the chicken is cool enough to handle, remove and discard skin and bones. Shred meat by hand or in a food processor or grinder.

In a heavy pot or Dutch oven, combine the shredded chicken, 3 tablespoons of the chili powder, cumin, half of the salt and the chipotle peppers. Add about 1 ½ cups of the reserved cooking liquid (refrigerate any remaining cooking liquid). Bring to a simmer, cover and cook 20 to 30 minutes, stirring frequently, adding more liquid as necessary to keep mixture moist. Stir in vegetables and lime juice. Cover and refrigerate overnight or until ready to assemble.

Soak corn shucks in warm water for 30 minutes to soften. Clean any debris from shucks and separate. In a large bowl, combine the masa harina, remaining chili powder and salt. Cut lard (and shortening, if using) into masa using a pastry blender or two knives, until mixture resembles coarse meal. (I used a stand mixer fitted with the paddle attachment.) Skim fat from reserved cooking liquid.

Add enough broth to reserved cooking liquid to make 4 cups. Gradually add broth mixture to masa mixture, stirring until a soft dough forms. Dough should be soft, but not wet, and make a slight sticking noise when a large clump is pulled off.

Place a softened corn shuck on a flat surface with a long side facing you. Spread a few tablespoons dough into a rectangle, leaving a 2-inch border on the top and on the narrow end of the shuck.

Spread about 1 tablespoon of filling horizontally down the center of the dough. Roll the edge closest to you over the meat, then gently roll shuck back to expose a small amount of the dough, then bring the far side toward you until the dough edges overlap, completely enveloping the filling; wrap the corn shuck around the tamale.

To cook: Fill a stock pot or the cooking vessel of slow cooker with enough water to fill by 2 to 3 inches. Place a steamer basket in the pot, then stack tamales in a crisscross pattern on their sides in the steamer basket. Cover and steam on low heat for 1 to 1 ½ hours, or until the tamales release easily from the shucks.

Notes: If using low-sodium broth or no-salt-added broth, additional salt may be needed.

Masa harina, a flour made from corn, is available at some supermarkets and Mexican grocery stores.

Cornbread made with lard has a light and tender crumb and delectably crisp crust.

Place 1 tablespoon of the lard in a cast-iron skillet. Place skillet in oven as it heats.

Meanwhile, in a mixing bowl, stir together the cornmeal, flour, salt and baking powder.

In a separate bowl, whisk together the milk, egg and remaining lard.

Add milk mixture to cornmeal mixture and stir until combined.

When the oven and skillet are hot, add the butter to the skillet and swirl to melt. Pour batter into skillet. Bake 18 to 25 minutes (depending on size of skillet) or until golden brown and cornbread begins to pull away from the sides of the skillet.