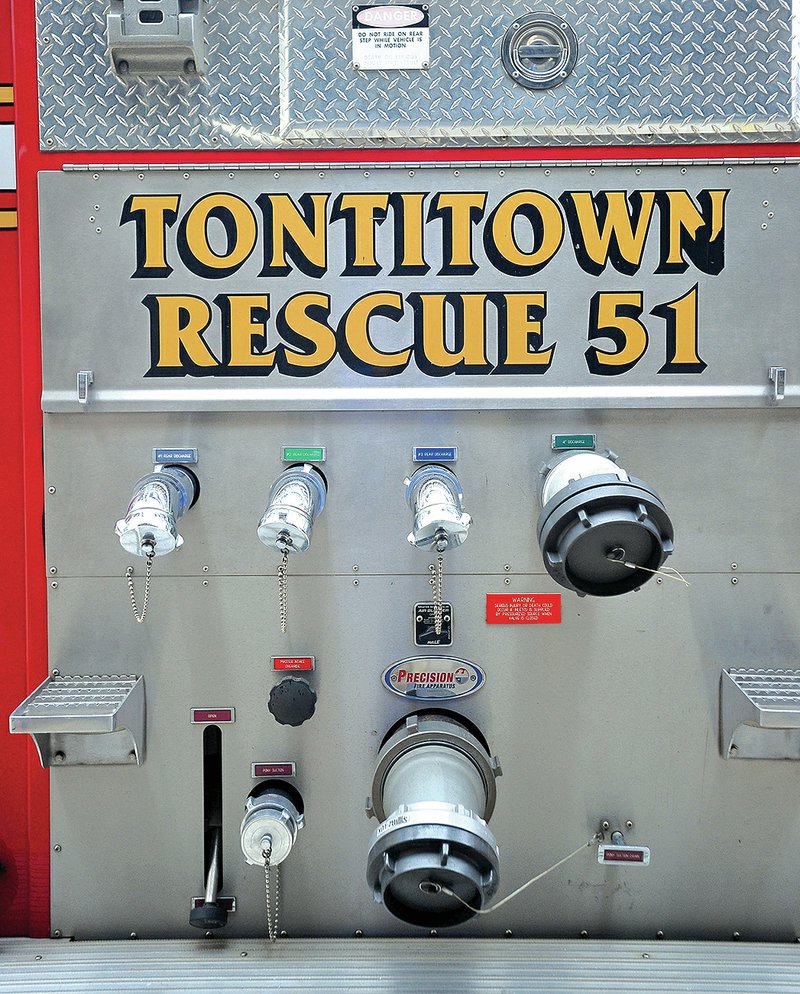 Staff Photo Michael Woods &#8226; @NWAMICHAELW The Area Fire Department began as an all-volunteer department, but grew to include some paid firefighters.

The Tontitown Area Fire Department, which has handled Tontitown calls for 30 years, voted to only answer calls in its response area outside the city, said Paul Colvin, board member. The change is effective July 1, he said.

"We decided to stop responding in the city when its representative said they were ready to go during a meeting with Springdale," Colvin said.

The Area Fire Department began as an all-volunteer department, but grew to include some paid firefighters.

Council members voted to start a city department when they couldn't agree on a new contract with the Area Fire Department.

"They don't have a tanker," Davison said. "How are they going to get water to those of us who don't live near a hydrant?"

Davison said he measured, and the nearest hydrant is more than 1,000 feet from his house at 971 Reed Valley Road.

The city department carries 2,800 feet of hose on its engines, said Kris Arthur, chief of both the Police and Fire departments. That length of hose would stretch from a hydrant to every house in the city, he said.

The pressure needed to fight the fire through long stretches of hose can be achieved by connecting the hoses with an engine in the middle, Trollinger said.

"Realistically, it would have to be a fire in a large building that burns for a long time to give you time to run the hoses," Trollinger said.

The city department engines have a capacity of 2,200 gallons of water, enough to knock down a fire, Arthur said.

That capacity would be enough for a fire in a single room and its contents, Trollinger said.

"Anything more than that, the capacity wouldn't be enough," Trollinger said, "especially if it spreads to the attic."

Fires in smaller cities usually are further along when firefighters arrive than those in cities with bigger departments, such as Fayetteville and Springdale, Trollinger said. Larger fires result from a longer response time, he said.

"The rule of thumb is a fire doubles in size every minute," Trollinger said. "In five minutes a fire can go from a trash can to half a room."

Another resident, Holly Childs, said the city's plan for a Fire Department wasn't well conceived or implemented. The Area Fire Department contract would have been about $120,000, she said. The city's cost for the new department is already more than $300,000.

The city hasn't spent that much, said Mayor Jack Beckford. The budget the city department is $351,000. The city has spent $147,000 this year on fixed assets, such as fire engines, he said. The amount spent on salaries has been $46,000, with $33,000 of that going to the Area Fire Department for service before the city department was formed.

Two used military vehicles, commonly called Humvees, were purchased for the city department, Arthur said. The city paid $1,200 each through a military program. The Humvees can be used as brush trucks, he said, to fight fires away from roads.

The Area Fire Department moved out of a city-owned building after Beckford gave notice to vacate an office and some bays to allow the city's fire engine to move in, Colvin said. The Area Department's trucks are being stored in shops in the city until a new station can be built, he said.

"I'm sure we'll have to do some fundraising," Colvin said. "We have some money, but we can't use it all. We have to have enough to roll out the trucks and fill them with fuel."

Print Headline: Fire Responses To Tontitown To Be Cut