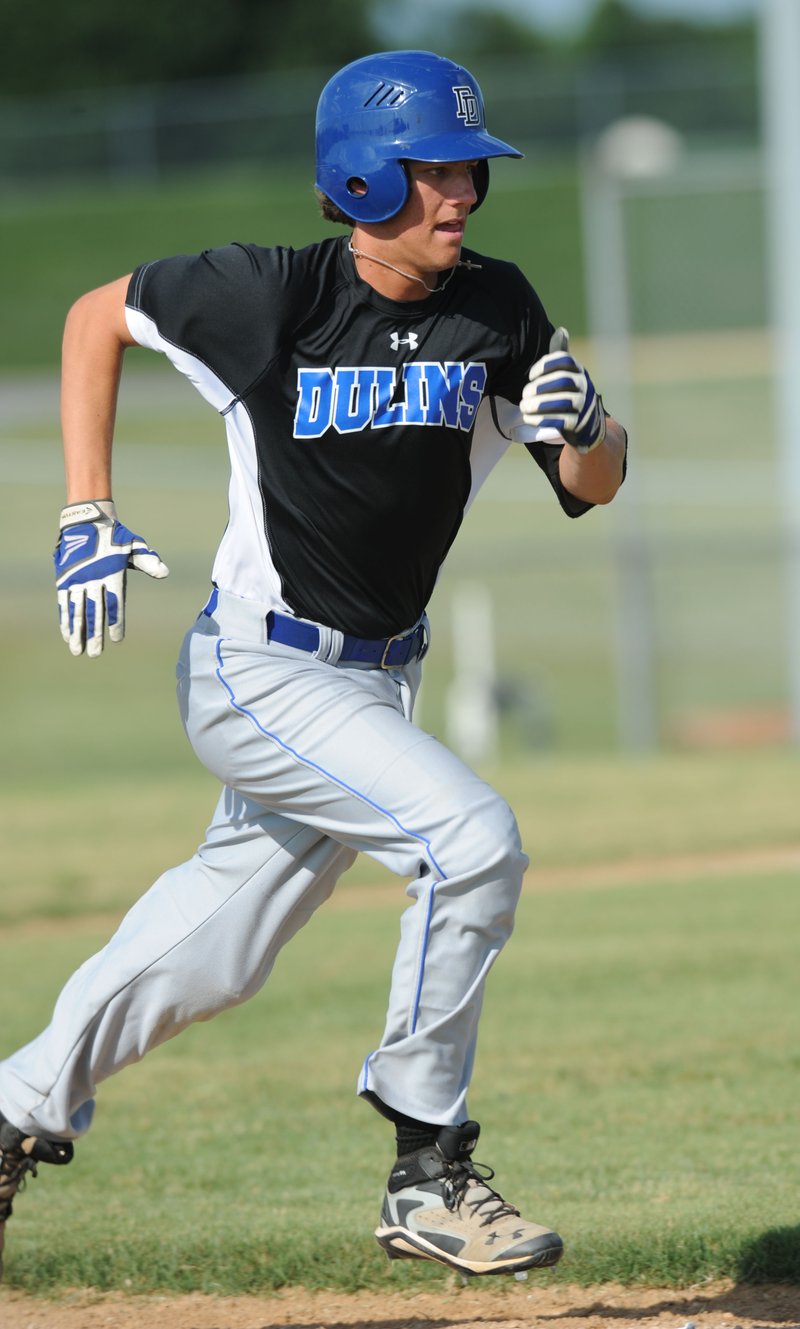 STAFF PHOTO ANDY SHUPE Grae Kessinger heads to first base during play Wednesday at the Tyson Sports Complex in Springdale.

SPRINGDALE -- Grae Kessinger has the name to play shortstop.

Notable: Verbally committed to play baseball at Ole Miss following his sophomore year. … Grandson of former Major League baseball player and manager Don Kessinger. … Kessinger’s father, Kevin, and uncle, Keith, also played baseball at Ole Miss and professionally along with his grandfather. … Plays summer baseball for the Memphis-based Dulins Dodgers, who are taking part in the Hawg Showcase in Northwest Arkansas this week. … Hit .395 with two home runs, 12 RBIs and 17 runs scored in 16 games as a sophomore at Center Hill High School in Olive Branch, Miss., despite missing the last half of the season with a stress fracture in his back. … Also went 4-1 with a 2.07 ERA on the mound. … Will play his junior season at Oxford High School in Oxford, Miss., after he recently moved back to where he grew up. … Already a two-time all-state selection in Mississippi.

Kessinger is showing off his talents playing for the Memphis-based Dodgers this week in the Hawg Showcase baseball tournament being played at several different sites across Northwest Arkansas.

"That's where I started, in T-Ball, been there ever since," Grae Kessinger said of playing shortstop. "It just feels natural."

That's no surprise since his grandfather, Don Kessinger, was a six-time All-Star and two-time Gold Glove Award winner at shortstop for the Chicago Cubs and enjoyed a 16-year big league career as a player.

Thompson said the younger Kessinger has some of those same skills.

"He's a great defensive shortstop, the best on our team and the best I've seen for that age," he said.

Grae enjoyed a solid sophomore season this spring, earning all-state honors for the second consecutive year at Center Hill High School in Olive Branch, Miss., despite missing the last half of the season because of a stress fracture in his back. He missed eight to 10 weeks but has been back full strength the past couple of weeks.

He showed off a plus-bat Wednesday against the RealTree 16 team of Oklahoma. He went 3-for-4 with three RBIs, two runs scored and a stolen base.

The Ole Miss commit singled in each of his first two at-bats between shortstop and third base, then hit a hard ground ball to third that was turned into a double play. The 16-year-old finished off his day with a big two-run double off the left-field fence.

Grae said his family never pushed him to play baseball, but there's no doubt it's in the bloodlines. In addition to his grandfather, his father, Kevin, and uncle, Keith, both played baseball professionally. Keith even had a brief stint in the big leagues. All three played baseball at Ole Miss.

"I haven't had any pressure really," Grae said. "It's been fine. If I make an error, my grandfather is there to say 'Hey, this is how you can fix it.' I've gotten a lot of tips here and there to help make me better."

He admitted it wasn't always easy to accept help when he was younger.

"It's hard to see that sometimes," Grae said. "But now I get it. I listen to everything, soak everything I can soak up."

Thompson said Kessinger's maturity both on and off the field belies his age and sets him apart from his peers, along with his physical ability.

"It's like he's bred to play baseball," said Thompson, who played three years in the Boston Red Sox organization. "He's definitely advanced mentally in the game of baseball coming from the bloodlines he comes from. He gets stuff that other kids don't."

"We expect a learning curve, especially at this age. Grae's ahead of that. He's like a coach on the field."

Don Kessinger, who now lives in Oxford, Miss., just enjoys the chance to watch his grandson grow up and play baseball. But the elder Kessinger acknowledged times have changed greatly from when he was a four-sport standout at Forrest City High School.

"Times have changed," he said. "Sports overlap so much now. Back in the day all coaches wanted their good athletes to play more sports. It's not that way now. That's not a negative, it's just different. I played basketball and baseball in college, and you just couldn't do that now."

Grae decided to give up football after breaking his arm in the eighth grade and also decided to forgo basketball going into his freshman year.

That's something else he's gotten no pressure from his family about either, he said.

"They say 'Do what you want,'" Grae said. "If I wanted to play other sports, they would be all for it."