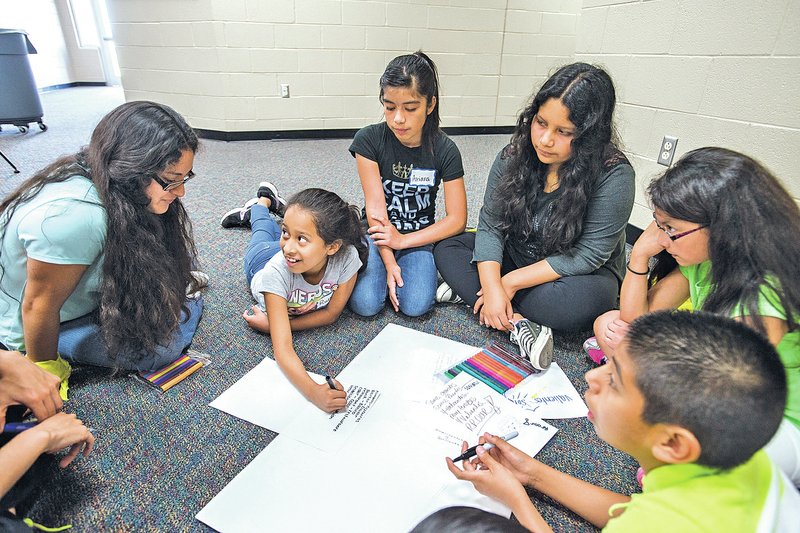 STAFF PHOTO ANTHONY REYES Isela Mercado-Ulloa, left, volunteer with a bilingual summer camp, helps Ruby Pena, 10, and her group find English/Spanish cognates Wednesday at the a bilingual summer camp at J.O. Kelly Middle School in Springdale. The children got a chance to practice their language skills and will learn about and perform community service projects.

SPRINGDALE -- A camp for students in Springdale could lead bilingual children to an adulthood with more job opportunities and larger salaries.

Thirty-two students in the Springdale School District are attending the Sin Limites camp at J.O. Kelly Middle School this week and next, said Cassandra Satterfield, a camp volunteer. "Sin Limites" is Spanish for "No Limits."

• People who are bilingual generally have more job opportunities.

• People who are bilingual generally have higher salaries.

• People connect more easily with others.

• People who are bilingual generally have good listening skills.

Some of the students are in English as a second language programs at their schools, Satterfield said. All of the students will be in fifth, sixth or seventh grade next school year and are native Spanish speakers. The lessons and activities are in Spanish because the camp is a language immersion program.

It's important for native Spanish speakers to practice their language because learning grammar and sentence structure in one language creates an easy transition for learning more languages, said Santiago Wood, executive director of the National Association for Bilingual Education. Students who grow up fluent in more than one language will have more job opportunities than their peers who speak only one language, and they will generally earn larger salaries.

The camp is important for Spanish-speaking students because they don't get the same kind of bilingual practice in their core classes, such as math and science, during the school year, said Jeanette Arnhart, camp coordinator. Arkansas law requires teachers to use English to teach core curriculum classes.

Ruby Pena, 10, said she speaks Spanish and English at home but doesn't know how to spell words in Spanish. She said she's learning better spelling skills at camp.

"I don't want to lose my Spanish," Ruby said.

Students sat in groups on the carpeted floor Wednesday morning and learned about cognates, words that sound the same in multiple languages. Students had three minutes to write down as many cognates as they could. Ruby sat with her group as they spoke about certain cognates such as radio.

She used a black marker to slowly spell out the words in English and Spanish on paper.

The theme of the camp is "Si yo no, quien?" or "If not me, then who?" said Satterfield. Lessons and activities are focused on leadership skills.

Students watched a film called "Walk Out" on Wednesday morning, said Arnhart. It's about high school students in the 1960s and '70s who organized walkouts.

"I want to teach them that you can't sit passively by," she said.

On Wednesday, campers will go to The Jones Center, Arnhart said. They will learn about staff jobs and will work on service learning projects.

"We're going to give back to a center that always gives to the community," she said.

Springdale police officers will spend time with campers at the center, Arnhart said. They will help students with projects and play games with them to foster trust.