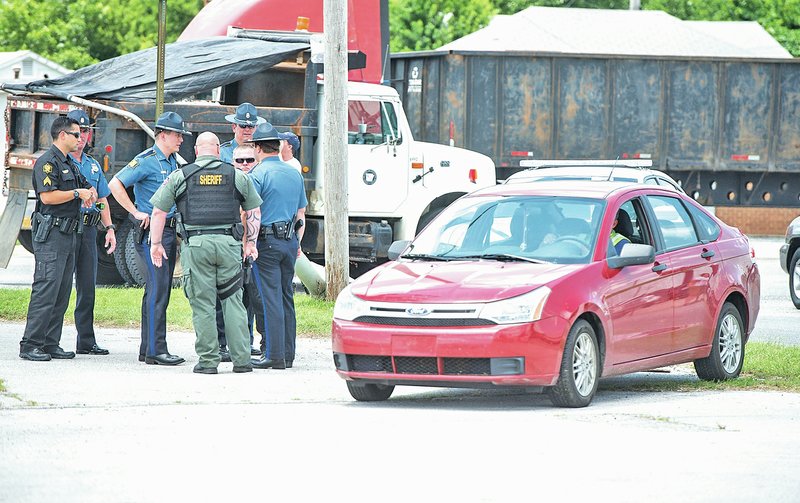 STAFF PHOTO ANTHONY REYES A tow-truck driver moves a red Ford Focus to his truck as Benton County Sheriff&#8217;s Office deputies, Springdale Police and Arkansas State Police gather Wednesday in the parking lot of the Springdale Bowling Alley. The officers arrested the driver of the Focus after a pursuit through Springdale.

SPRINGDALE -- A high-speed chase that started in Springdale and extended into Benton County ended Wednesday with an arrest in the parking lot of the Springdale Bowling Alley.

Jason Komsonekeo, 33, was arrested by Arkansas State Police troopers. Komsonekeo could face felony fleeing, violation of an order of protection and criminal mischief in Springdale, according to a Police Department news release. Other charges could come from Benton County law enforcement agencies and State Police. Komsonekeo had a warrant for absconding.

Springdale officers were called at 8 a.m. Wednesday about a report Komsonekeo violated an order of protection at 1397 Austin St., according to the news release. He left before officers arrived.

Police were called again at 12:30 p.m. to find Komsonekeo had again left the scene, according to the release. His red Ford Focus was spotted on Sunset Avenue by an officer who tried to stop the vehicle.

Komsonekeo fled to Interstate 49 and headed north. The pursuit was called off after reaching speeds of 80 mph in a construction zone near the Wagon Wheel Road interchange, following Springdale Police Department policy.

Troopers spotted the vehicle and another pursuit began. This pursuit led back to Springdale where it wound through the city on several highways and streets.

Springdale officers participated in the second pursuit by clearing intersections to keep other motorists out of danger. They also unsuccessfully used spike strips near the intersection of Wagon Wheel and Silent Grove roads to flatten the vehicle's tires.

The pursuit ended when Komsonekeo pulled into the bowling alley parking lot near the intersection of Thompson Street and Porter Avenue.