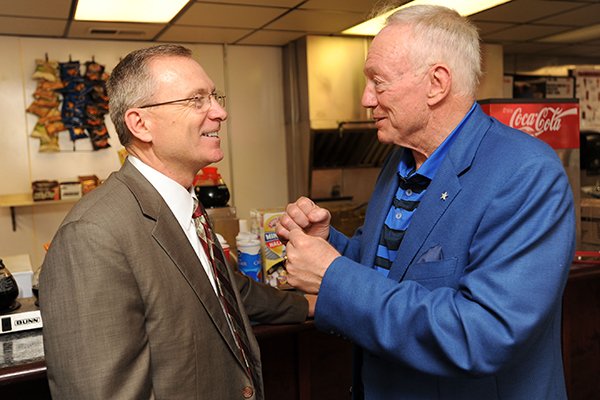 FAYETTEVILLE — It’s an understatement to say Dallas Cowboys owner Jerry Jones is happy to welcome the Arkansas Razorbacks back to AT&T Stadium for the 2014 season.

Arkansas will play Texas A&M Sept. 27 at the Cowboys’ home stadium in Arlington, Texas, after a two-year absence.

“Nothing, nothing, nothing has made me prouder with the Cowboys or anything — [hosting] the Super Bowl, the Final Four — than to know the Arkansas Razorbacks are playing football in that stadium,” Jones, a former Arkansas player, said Friday during a visit to Fayetteville. “That’s just a dream come true for me.”

After AT&T Stadium — formerly known as Cowboys Stadium — opened in 2009, the Razorbacks beat the Aggies there in 2009, 2010 and 2011 before the series moved to campus sites the previous two seasons after Texas A&M joined the SEC. The Aggies beat the Razorbacks in College Station in 2012 and in Fayetteville in 2013.

The teams have a contract to play in AT&T Stadium through 2024.

“When I was thinking about building it, there wasn’t a day that I didn’t think about helping those Pigs out by playing in that stadium,” Jones said.

Arkansas finished 3-9 last season, including 0-8 in the SEC, in Coach Bret Bielema’s debut, but Jones said he believes Bielema will turn around the program. Bielema was 68-24 in seven seasons at Wisconsin and won three Big Ten championships before taking the Arkansas job.

“I really, really think our coach is the answer,” Jones said. “I have a lot of respect for him.”

Jones said NFL personnel who know Bielema applaud his philosophy of wanting to develop a physical run game and defense. Jones said it’s an approach that should help the Razorbacks compete against SEC powers such as Alabama, Auburn and LSU.

“I like it as to what our competition is, what we match up against,” Jones said. “I think he’s a perfect coach for the matchup.

“We want to be able to beat Alabama and those big teams, and to do that we’re going to need some big linemen on both sides of the ball.”