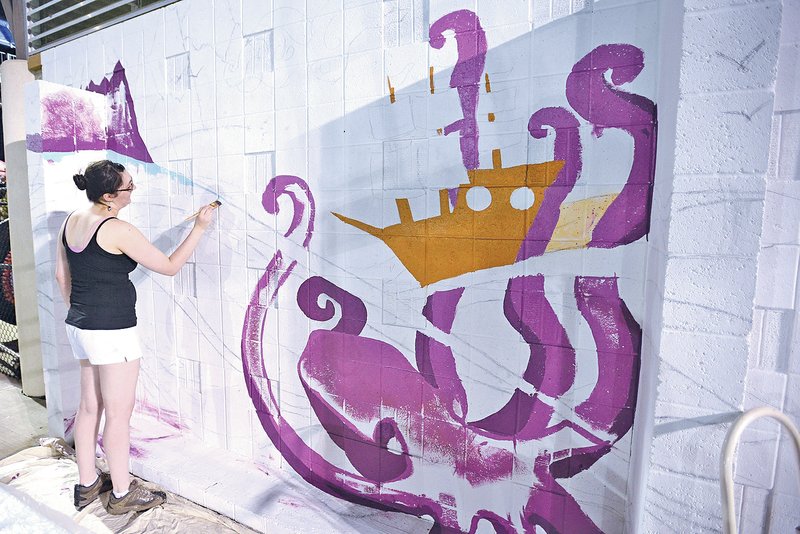 STAFF PHOTO SAMANTHA BAKER &#8226; @NWASAMANTHA Emily Chase has been working on her mural at night to avoid the heat during the day.

SPRINGDALE -- People who swim at the Springdale Aquatic Center will soon be able to imagine themselves swimming with sea monsters and dolphins.

Emily Chase, an artist and resident of Johnson, is painting a mural on the back wall of the center. The artwork will show the sea, a sea monster, a ship, whales, dolphins and fish.

Emily Chase is a 2013 graduate from the University of Arkansas. She earned a bachelor of fine arts degree in painting. To view more ofher artwork go to www.emilymchase.com.

• Murals can help decrease the likelihood of graffiti.

• Murals can help create a greater appreciation of visual arts.

• Murals can help increase people’s pride in their city or neighborhood.

A panel of judges chose Chase to create the mural as part of a contest put together by Team Springdale, said Amber Perrodin, a creator of the group. Team Springdale highlights businesses and events in the city. More than 20 artists submitted their work to the contest throughout May and June.

The mural must have an aquatic theme, be family friendly and be able to fit on two walls -- one 14 feet long and the other 16 feet long -- with a gap between. The judges chose Chase's mural because she used large blocks of color and the artwork was relatable to children.

Perrodin said the mural is part of a new program of Team Springdale called Springdale Art Initiative. The artwork at the center is the only project under way now, but she said she'd like to expand it by creating murals in other Springdale parks.

McWhorter said he doesn't know where more murals could go, but he would like to see more in parks. He said Chase's art will provide bright colors at the Aquatic Center. He would want murals that are educational and calming if more are created.

Perrodin said Team Springdale won't pursue a second mural until the first is complete. Chase said she hopes to have it finished by the end of August.

The city of Springdale doesn't have a public art plan, said Doug Sprouse, mayor. He said officials will probably look into ways of allowing art in public spaces as more revitalization happens downtown. The challenge will be creating safeguards to prevent graffiti.

"Art is a funny thing," he said. "One person's art is another person's nightmare."

The Mural Arts Program in Philadelphia, Pa., has helped incorporate murals into the its city for 30 years, said Amy Johnston, spokeswoman. The program started as part of the Philadelphia Anti-Graffiti Network, which helped graffiti writers redirect their creativity toward creating murals. The city now has more than 3,600 murals.

Johnston said murals are a way for artists to tell stories publicly. They can incorporate culture and history.

"Murals can be whatever you want them to be," she said.

"It can really augment the place and make it more of a destination," she said.

Terri Pittman, a Springdale resident, was at the Aquatic Center on Monday for her 6-year-old son's swim lesson. She said her three children are amazed by murals they see in other cities. Children are good at noticing details, and the artwork might help them use their imaginations while in the pool, she said.

Lian Walters, 7, who also was at the center for a swim lesson Monday, was excited about the mural. He said it would make him feel like he is playing in the ocean, and he would imagine swimming away from the ship and sea monster on the wall.

Chase said she loved to swim as a child, and still does. She used to imagine herself as an adventurer voyaging across the sea. She wanted to incorporate her childhood imaginings into the mural to make it attractive to today's children. She also hopes it will help adults remember their childhoods.