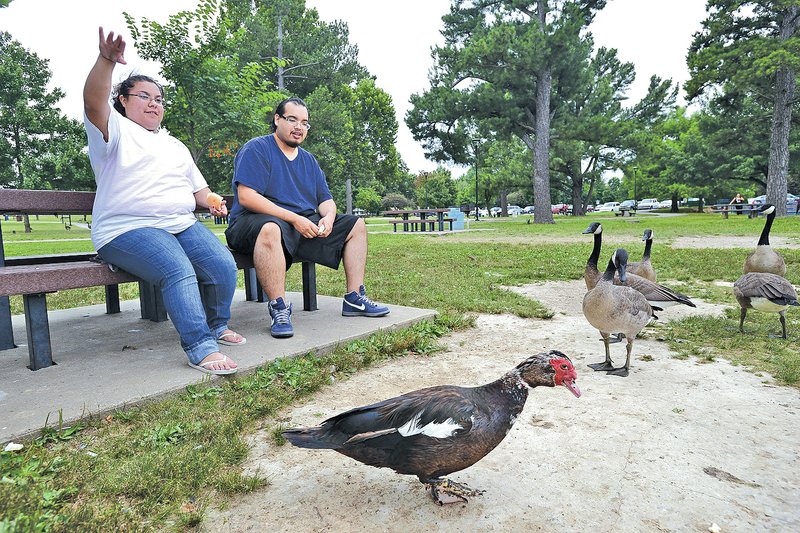 SPRINGDALE -- Lunch was served early at Murphy Park on Friday to a flock of Canada geese, mallard ducks and other species.

Almost 100 waterfowl waddled around the north end of the park, crowding in, expecting food from anyone who walked by.

Canada geese, and all birds that migrate from state to state or across international borders, are protected by the Migratory Bird Treaty Act of 1918. Approval of the treaty came when the population of several bird species were threatened similar to to the extinct passenger pigeon. Some species have recovered so much that nuisance flocks have been created.

Gina Ramirez said she brings her granddaughter by about once a week to feed a loaf of bread to the ducks and geese. Megan Cooke, Ramirez' friend, brought her two daughters, also.

"The kids love it," Ramirez said.

Another visitor, Tracee Bohannon, has noticed a potential problem with the birds when she brings her son Noah to the park.

"I think there are a little too many of them," Bohannon said. "They can be scary."

The geese are aggressive when they don't get the food they expect, said Rick McWhorter, director of parks and recreation for the city.

"It's my worst fear, that they could harm a child," McWhorter said.

The city is starting a program to control the geese, according to Mayor Doug Sprouse.

The excessive numbers in the park creates overcrowding for the birds; a mess on the grass from the droppings; and a drop in the quality of water in the pond, he said.

An adult Canada goose may defecate every 20 minutes and can produce as much as 1.5 pounds of feces daily, according to wildgoosechasers.com. The droppings have created a maintenance nightmare, McWhorter said.

Geese tend to congregate in coves at the lake where they are being fed, Morgan said. Their droppings create bacteria in the lake water. The district treats lake water to create the drinking water for much of Northwest Arkansas.

Some of the feeding spots are near swim areas, said Alan Bland, a Corps of Engineers park ranger at Beaver Lake.

Those areas have mown grass almost to the water's edge, the environment preferred by geese, Bland said.

Resident geese stay in the area all year instead of migrating, said Steve Dunlap, Arkansas Game & Fish Northwest Region education coordinator. Any birds hatched in the area will stay here instead of flying to Canada in the spring, he said.

Feeding the fowl can create a larger flock than the area can naturally support, Dunlap said.

"Anytime you have overpopulation and crowding, the birds will not be as healthy and will be more susceptible to disease," Dunlap said.

The first step toward controlling the flock in Springdale will be to try to stop visitors from feeding the birds, Sprouse said. The next step is not known.

"We're still doing research on how to control the population," Sprouse said.

The corps doesn't encourage or discourage feeding geese, Bland said, but does ask people not to feed in swim areas. Lake officials use a spray on the grass in swim areas that makes it taste bad to geese, he said. A green laser light also is used to discourage geese gathering in those areas.

"You can bounce the laser off their feathers or the water," Bland said. "They don't like it and they will leave."

Bella Vista has a three-part program to get rid of geese that has been successful, Bowman said.

An ordinance bans feeding of geese, Bowman said. Secondly, volunteers cover the city early in the nesting period looking for eggs. The eggs are dipped in cooking oil, he said, preventing the embryo from developing.

Finally, during the moulting season when the geese can't fly, the birds are rounded up and taken to a processing plant, Bowman said. The birds are killed with the meat donated to food banks.

"Our resident flock is less than a hundred now," Bowman said.

Carrying out this plan requires permits from the federal Fish and Wildlife Service, Bowman said. The plan was patterned on one used by the state of Missouri, he said.