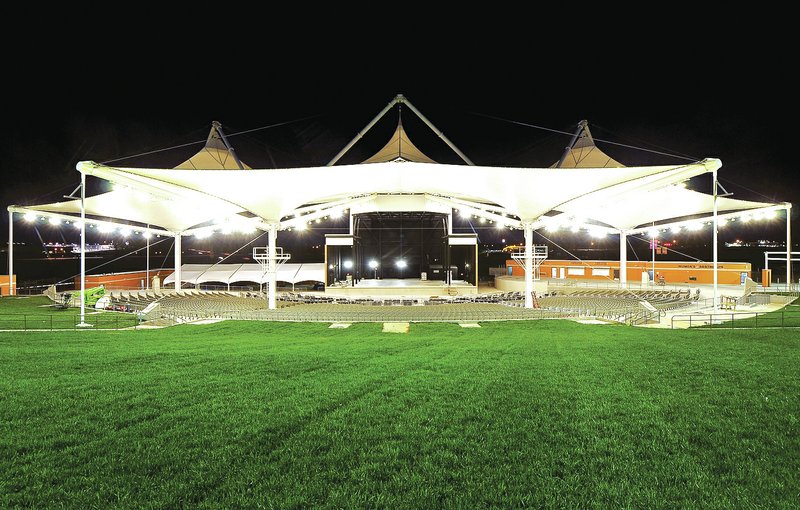 FILE PHOTO BEN GOFF &#8226; @NWABenGoff The Walmart Arkansas Music Pavilion in Rogers is general a few noise complaints since opening June 7. City officials said they are satisfied the construction process did everything it could to block the sound.

ROGERS -- Live music arrived in Rogers six weeks ago with the completion of the Walmart Arkansas Music Pavilion, but sound from the outdoor venue is carrying beyond the fence.

City officials said they are satisfied the construction process did everything it could to block the sound. A sound ordinance revised before the venue's opening exempts school events, special permit holders and commercial facilities built to reduce sound to "minimally intrusive levels."

From 7 a.m. to 10 p.m. residential areas in Bentonville have a limit of 60 decibels, commercial areas 65 and industrial areas 70 decibels. After 10 p.m. until 7 a.m. the levels change to 55 decibels in residential areas, 60 in commercial and 65 in industrial areas. A series of conditions are prescribed for measuring decibel levels. Restaurants and nightclubs are considered commercial for noise ordinance purposes. Unreasonable or excessive noise is generally prohibited. Aircraft are exempted from city ordinance.

Unreasonable or excessive noise is prohibited. Radio, television or other audio devices are counted if disturbing the peace if the sound is plainly audible from a distance of 150 feet or more. Athletic and school events are exempted as are aircraft or special permit holders.

From 7 a.m. to 11 p.m. residential areas in Springdale have a limit of 65 decibels, commercial areas 75 and industrial areas 85 decibels. After 11 p.m. to 7 a.m. residential noise is not to rise above 60 decibels, the commercial limit is set at 70 and industrial at 80 decibels. The ordinance includes fines of $150 to $250 for the first offense, $500 to $1,000 for a second offense and not less than $2,000 for a third offense. School facilities and Rodeo of the Ozarks events are exempt from the noise ordinance.

Unreasonable or excessive noise is generally prohibited in the Rogers noise ordinance, passed May 27.

Sound plainly audible from 50 feet or more boundary line of any private property is prohibited. “Plainly audible” is defined as a volume above that of normal conversation.

Public address systems are restricted to 8 a.m. to 8 p.m. in residential areas, from 8 a.m. to 11 p.m. Sunday through Friday and 8 a.m. to midnight on Saturdays.

City ordinance exempts school events, special permit holders and “Any commercial facility whose primary business is the production, display and promotion of musical events and whose permanent facility and primary structure has been designed and built with such inherent architectural, design, landscape and topography measures as to reduce sound to minimally intrusive levels.”

The state can investigate any holder of an Alcoholic Beverage Control permit may for excessive noise or loud music that constitutes a disturbance of the public peace under its “good neighbor” clause.

To read the sound study on the Walmart AMP, go to www. nwaonline.com/documents.

Resident Jon Fletcher, who lives north of the pavilion in the Overland subdivision said the "minimally intrusive" clause exempting the facility is too broad. During the June 28 Dierks Bentley concert, he said he could hear the music indoors.

"You shouldn't be able to hear the boom, boom, boom over the TV in your bedroom from more than a mile and a half away," Fletcher said.

City officials said there have been few complaints about the sound.

Hines said if someone calls or texts him about a concert, it's typically within minutes of the end. He had two complaints about the July 7 Willie Nelson concert, which he thought was odd.

"That was probably the lowest volume concert that was out there," Hines said.

Because the pavilion is exempt by city ordinance, the Rogers Police Department doesn't take noise complaints, but they are still tracking the issue, said Capt. Hayes Minor, who leads the Criminal Investigation Division and uniform operations for the department.

He's asked dispatchers to email him a list of the addresses from calls. He drives out and listens to see if the music is louder than road noise, Minor said.

The sound is tricky, and moves around from concert to concert, he said.

"A lot of this is based on the weather," Minor said.

Just before the June 28 concert, the same one Fletcher could hear indoors, the humid day turned to rain. That concert had more complaints than the others, maybe six total, and more complaints from north of the facility, Minor said.

Sound travels as a wave, but the speed of sound depends on temperature and humidity, he said.

A thermal inversion, when air is cooler near the ground than higher in the atmosphere, creates a channel for sound in much the same way light moves through a fiber optic cable. The sound will be louder and travel farther under those circumstances, Gea-Banacloche said.

A thermal inversion allows voices to carry clearly across a lake as dusk falls and the water cools the air, Gea-Banacloche said.

Wind can channel sound in much the same way, if there are slower wind speeds close to the ground with stronger wind above. Refraction bounces the sound down toward the ground as it tries to rise.

Shorter wavelengths of sound, which correspond to higher pitches, are easier to block with walls or trees, Gea-Banacloche said. Longer, deeper-sounding wavelengths are harder to block.

How annoying any one noise sounds is basically perception, he said.

Last year when the venue was at the Washington County Fairgrounds, Fayetteville police took decibel readings at the property line as concerts began and throughout the night to ensure compliance, said Craig Stout, public information officer.

Decibel readings, which measure sound, were instituted in Fayetteville because of complaints as Dickson Street grew in the 1990s, Stout said. Today many of the venues along Dickson have their own sound meters, he said.

"We took a lot of noise meter readings back in the day," he said.

The noise ordinance in Rogers doesn't refer to decibel levels, unlike Bentonville, Fayetteville and Springdale.

The difficulty is in enforcement, said Chris Griffin, deputy city attorney for Rogers. Readings would have to be taken from the property line, then there's the ambient noise of the highway joining the music. Officers would have to be trained how to use sound meters, and those would have to be calibrated, Griffin said.

There has been confusion in the past with music venues, Griffin said. Were officers to cite the owner or the disc jockey who had control of the volume?

There has to be a balance in accommodating the demand for live music with the sound that drifts out of the venue, he said.

The bowl design was created to capture sound, said Erin Rogers, spokeswoman for the pavilion.

Pavilion management wants the best sound for patrons, but also wants to work with the community, Rogers said. The big name artists playing now require some changes. Concessions, the ticketing process and sound are all under review, she said.

The self-imposed maximum sound limit is 105 decibels, said Brian VanAuken, director of production at the pavilion. There are four speakers set at the base of the lawn, he said.

Some performers bring their own equipment, but they still use the house speakers, Rogers said. Artists have been given an 11 p.m. curfew to end all performances, she said.

The Walmart AMP has made a good neighbor, said David Lang, general manager at Embassy Suites. From the patio you can hear the music, but he's had no guest complaints.

A sound study completed last July by JaffeHolden anticipated an increase in noise in the surrounding community as a result of the concerts. An email to the study's author wasn't returned Friday. The study anticipated an 11 decibel increase in sound across Interstate 49 in the Mercy Hospital parking lot.

Not everyone buys a ticket to hear the concert. Sometimes they set up across the highway.

Best Buy employees have seen a few people tailgating during the concerts, said employee Tori James. The number of people depends on the act, she said.

"They just kinda park their lawn chairs out in the parking lot," James said.