Architects proposed Tuesday a cottage-style design for the new veterans home that will be built in North Little Rock. 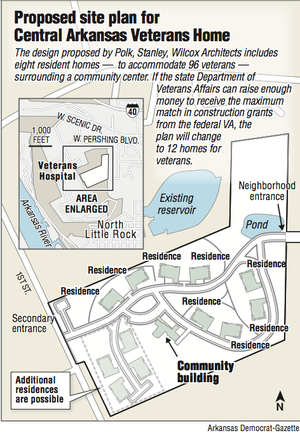 A map showing the location and layout of the proposed site for the Central Arkansas Veterans Home.

The first public presentation of the design comes two years after Cissy Rucker, director of the Arkansas Department of Veterans Affairs, announced the closure of the Little Rock Veterans Home at 4701 W. Charles Bussey Ave., which had structural problems that would have cost more than $10 million to repair.

The design, presented to the Arkansas Veterans Commission, consists of eight residences, each 10,000 square feet, that would house 96 residents. The cost of the current design is $22 million, which would be paid for with state funds and a construction grant from the federal VA.

"I wanted us to do a new home that we could be proud of, rather than making a knee-jerk decision to go get a place and fix it up," Rucker told the commission Tuesday. "I know no design is going to make everybody happy, but we felt this would fit the needs more than any we've seen."

The complex will be built on a 34-acre parcel that was part of a nine-hole golf course managed and leased by North Little Rock until it closed July 1. Rucker chose the site in March partly because of its close proximity to the Eugene J. Towbin Health Care Center, formerly called Fort Roots, which serves as a primary care facility for veterans.

Jerry Walleck, with the international architecture firm Perkins Eastman, told the commission that the design falls in line with new standards established by the VA's guide for community living. Walleck, who has designed several veterans homes in surrounding states, helped design the home as part of an affiliation with Little Rock-based Polk, Stanley, Wilcox Architects.

In the cottage-style complex, 12 veterans in each home would have private rooms with restrooms, and they would share a kitchen, office, dining room, den, garage and wrap-around porch. These homes would surround a community building, which would be used for large events and administrative offices.

Two certified nursing assistants would be assigned to each home, with one licensed practical nurse for every two homes, Rucker said. One registered nurse would be on duty 24/7 to serve the entire complex.

"It's a smaller-scale, intimate environment," Walleck said. "Before, they constructed warehouses of long-term care with 200, 300, 400 beds and long hallways. Why is that good for anybody? It should be residential, not institutional."

Most of the commission -- a 15-member, governor-appointed group established in 2010 to oversee operations and improvements at the state veterans homes -- lauded the plan.

However, some present Tuesday had complaints about the number of residents the complex could house, while others questioned if the cottage-style homes would damage a sense of community.

The U.S. Department of Veterans Affairs estimates that there are more than 250,000 veterans in Arkansas, with about 32,000 in Pulaski County. Since the Little Rock Veterans Home closed in 2012, there has been only one state-run veterans home in Arkansas. No state surrounding Arkansas has fewer than three homes, according to the National Association of State Veteran Homes.

"I think this facility, as nice as it is, is going to fill up real quick," said Harlie Treat, a veteran and commission member. "There's no way that 96 beds is going to be adequate for the number of vets we have here in central Arkansas. We certainly need to have a plan here that we can add to."

Rucker said the state agency is developing a plan for building more veterans homes in the future. The department will next look at establishing a home in northeast Arkansas, said Charles Johnson, Rucker's deputy director.

Rucker also noted that the current design could bump up to 12 homes accommodating 146 residents if the agency can raise enough money to receive the maximum match in construction grants from the federal VA.

The federal Department of Veterans Affairs announced in March that the veterans-home proposal is funded through the agency's budget this year. The federal agency will pay 65 percent of the costs with a maximum contribution of $28 million, Rucker said.

In February, the Arkansas Legislature voted to appropriate $7.5 million in state surplus funds for the new home, and the state VA has gathered an additional $550,000 in donations, Rucker said. With the matching grant, the project would cost $22 million.

In order to receive the maximum funds available, the state agency needs to raise another $1.2 million by the time the project is completed, Rucker said. Altogether, the project would cost about $37 million.

At the meeting Tuesday, the Combat Veterans Motorcycle Association donated $10,000 toward the state's fundraising efforts.

"Over the years, we believe that the veterans in Arkansas had been abandoned, that we had been ignored," said Mike Hampton, representing the state Combat Motorcycle Riders. "I want to tell you today that I think the commission, the governor, the legislature, the new VA administration, is doing what it takes to get things corrected. We still have a long way to go, but this is the first step."

John Kendall, who was the president of the residents council at the old Little Rock Veterans Home, said Tuesday that although the concept of the new home was attractive, he couldn't imagine enjoying living in the cottage-style complex.

"At the old home we were a family. We looked out for each other," he said. "I don't see that happening in these cottages. They will be separated."

The state Department of Veterans Affairs recently submitted the design -- 35 percent completed -- to the federal VA for conditional approval. They will learn whether the design was approved by September, Johnson said. If approved, the state would have six months to finish the design and application and hire a contractor.

"Once that's good to go, that will trigger federal money to start flowing into the state, and we'll get started," Johnson said.

Walleck estimated the home would take about 16 months to construct and could be completed in 2017.

By the end of the summer, the department hopes to complete an environmental assessment of the land in order for the acreage to be transferred to the state.

Rucker said the agency will also soon discuss details of how the home will be operated, such as whether the state will contract out its management.

Johnson expressed concern Tuesday that if the agency ran the home itself, the state would incur the cost of the staff's salaries. Commission member Tom Thomas asked that the commission be present during these discussions.

"There's a lot of people out there who have said contracting is the way to go, and some have said go with state employees," Thomas said. "It behooves this commission that when that time comes, let's deal with the facts. Let's take a hard, truthful look and let the numbers dictate. Let's get both sides of it."

Also Tuesday, Rucker told the commission that old Little Rock Veterans Home on Charles Bussey Avenue will soon be demolished and the land sold. The building was closed in 2012 because of structural damages and after it was found that the agency illegally collected about $600,000 in out-of-pocket fees from residents.

Since the building was put up for sale two years ago, the state agency has received one offer -- for $1,000.

"No, that won't work," Rucker said. "It was a nonprofit with no history, no clearly defined mission, no fiscal plan and no funding. For us to sell the home to them in the shape it was in, it would not be a good thing for the state."

Instead, the land will be sold to the Little Rock Metropolitan Alliance, which will pursue revitalizing the area with funds from a brownfields grant from the U.S. Environmental Protection Agency, Johnson said. The alliance will pay about $50,000 for the land; however, the agency must demolish the building first, Rucker said.

The governor's office will pay about $120,000 for the demolition, which will happen "soon," Rucker said. The $50,000 from the sale will provide some reimbursement from the demolition.

"I'll be glad to see that building go down," Rucker said. "It really represents a dark time in the department."