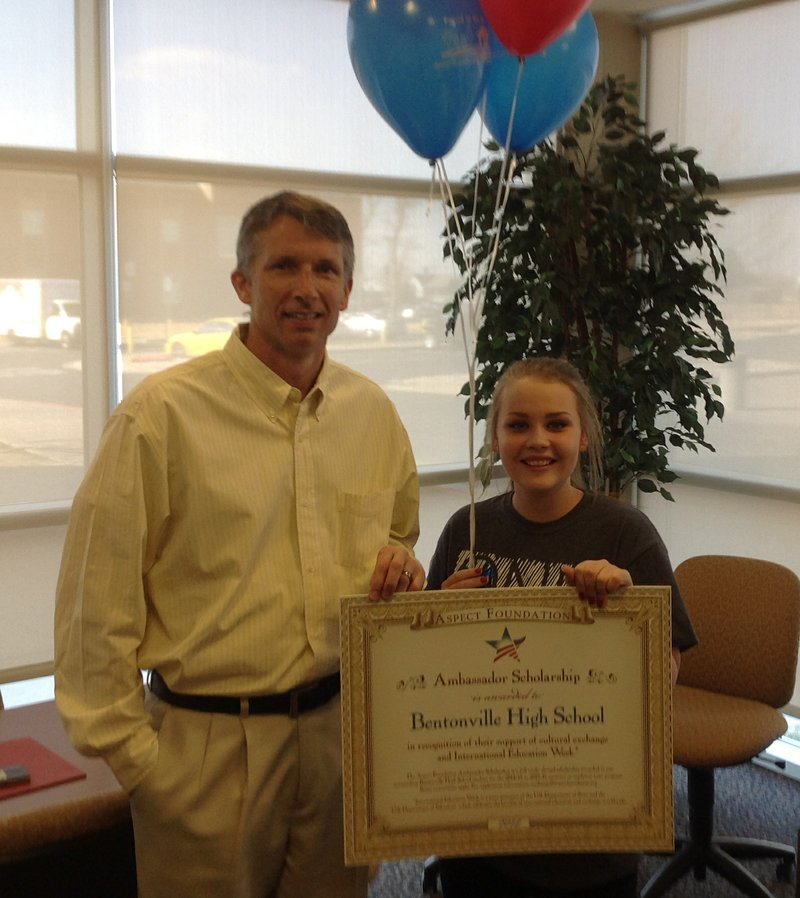 Staff Photo Dave Perozek Chad Scott, Bentonville High School principal, and Anna Hemmingsen, an exchange student from Denmark, hold an award Wednesday given to the school in honor of Hemmingsen being chosen the winner of a national video contest.

BENTONVILLE — BEOne lucky Bentonville High School student will get a chance to study overseas because Anna Hemmingsen talked about her homeland.

Hemmingsen, 16, gave a presentation on Denmark in November in which she discussed the country's culture and traditions. That presentation was filmed and submitted to a national contest run by the Aspect Foundation, a San Francisco-based organization that facilitates study-abroad programs.

The Aspect Foundation, founded in 1985, is a nonprofit organization that offers study-abroad opportunities to students from around the world. Aspect Foundation students live with volunteer host families in more than 350 communities throughout the United States. The foundation also offers U.S. students the chance to spend a high school year or semester abroad.

Hemmingsen, who is attending Bentonville High this year through the foundation, learned this month she had won the contest. Her prize was $250.

Another part of the award is an Aspect Foundation scholarship for one student at her host school to study abroad during one of the next two school years. Depending on the country the student chooses, that scholarship is worth between $8,000 and $10,000, said Terry Throop, an international coordinator with the foundation.

The scholarship provides one semester or academic year program fee, travel insurance and round-trip airfare to the host country. It does not cover personal spending money, visa fees, books, uniforms or any additional tutoring or language study.

Chad Scott, Bentonville High principal, said he'd circulate the scholarship information to the school's foreign-language teachers so they could inform students about it.

Bentonville High has 13 foreign-exchange students this year, according to Tommy Runnels, assistant principal. Four of them are here through the foundation's program.

Hemmingsen lives in Bentonville with host family Eddie and Robyn Nelson and their two children. She was one of 18 students who participated in the foundation's video contest. In her presentation, which she made at Rocky Branch Baptist Church in Rogers, she talked about Denmark's flag, its king and queen and the fact it produces a lot of bacon.

"We have twice as many pigs as we have humans," she said.

She also discussed some differences she's noticed between Denmark and Arkansas. One is people here do volunteer work, which is uncommon in her country, she said.

Another difference she noted is how often strangers talk to each other in Arkansas.

"I talked to some girl, and she said, 'I love your shoes.' And I didn't even know her. I thought it was weird, because we don't do that in Denmark. We just don't talk to strangers," Hemmingsen said.

A panel of three foundation employees judged the videos and unanimously decided Hemmingsen's was the best, said Jessie Wright, foundation publicity coordinator. The contest was held in celebration of International Education Week in November.