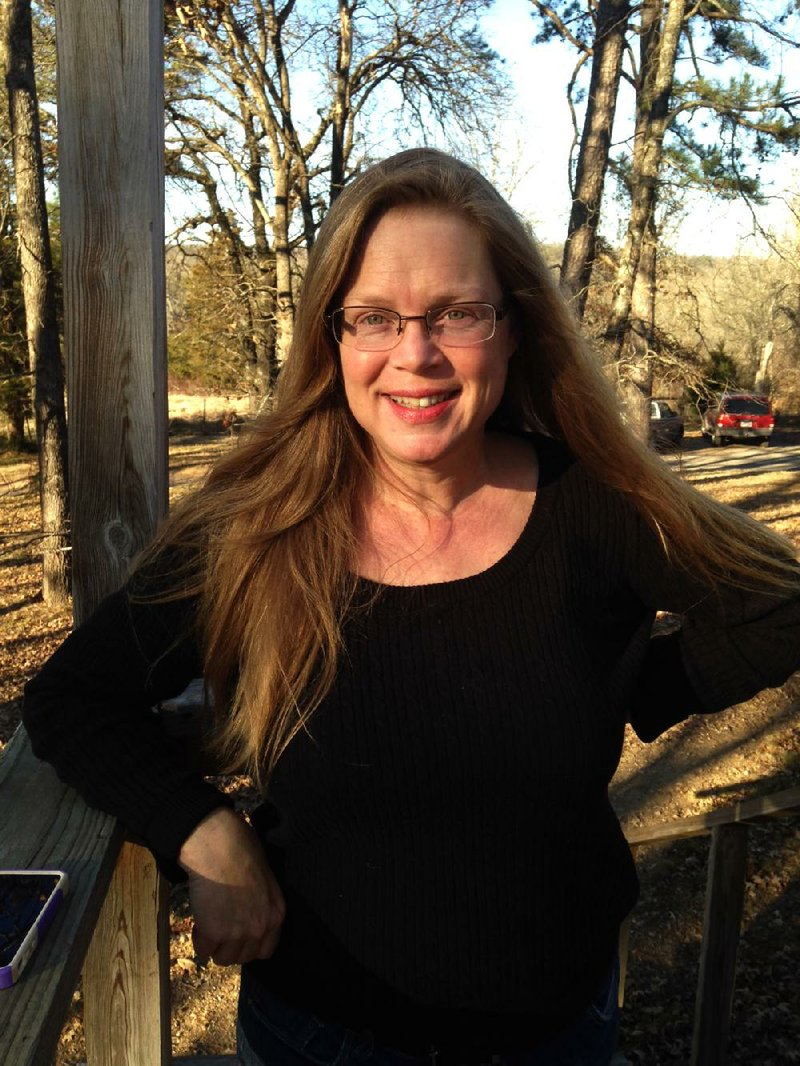 Denise White Parkinson is the author of Daughter of the White River, the story of Helen Spence.

Ever hear the story of Helen Spence? Daughter of the White River: Depression-Era Treachery & Vengeance in the Arkansas Delta

She’s the teenager who, in 1931, took a pistol to the Arkansas County Courthouse in DeWitt and killed Jack Worls, the man who was standing trial for the murder of her daddy, Cicero, just before the case was to be handed over to the jury.

Little Helen Spence - born in 1912 (the exact day is lost to history) but just barely 5 feet tall, pretty as a flower, who could sew and shoot with equal aplomb, like a White River mixture of Huck Finn and True Grit’s Mattie Ross; married briefly to Buster Eaton before she fled his moonshining ways - was all over the papers: The New York Times. The Washington Post. The Arkansas Gazette and the Arkansas Democrat, of course.

In the age of Bonnie and Clyde, she was in many ways just as infamous. Asked why she did it, she said, simply, “He killed my daddy.”

Convicted of manslaughter, Spence began serving a two-year sentence on Oct. 11, 1932, at a women’s prison in Jacksonville known as the Pea Farm and was ordered never to return to Arkansas County.

A week after she was released - and this is where things take a rather wild twist - she went to a police station in Little Rock and confessed to the February 1932 murder of Jim Bohots, the unpopular owner of the DeWitt diner where Spence worked while she awaited sentencing for the slaying of Worls. It was a particularly stunning and inexplicable act, since she’d been ruled out as a suspect by the prosecuting attorney.

That confession was the beginning of her end. Spence was sentenced to 10 years at the Pea Farm, where she made five escape attempts, the last one proving fatal. Helen’s life, the culture of the river people from which she came, her brutal treatment at the hands of Arkansas prison authorities and her senseless death, have now been documented in Daughter of the White River: Depression-Era Treachery & Vengeance in the Arkansas Delta ($19.99), the exhaustively researched and lovingly written book by Hot Springs writer Denise White Parkinson, published by The History Press of Charleston, S.C.

Oh, and one of her sources for the book? Lemuel Cressie (L.C.) Brown Jr., who knew Helen when he was a little boy and who was playing on the courthouse lawn that mild January day she shot ol’ Worls four times in the stomach in a pattern so neat, Brown recalls, that “they said you could cover it with a hat.” Parkinson, 50, was born in Pine Bluff and graduated from Hall High in Little Rock before attending Hendrix on scholarship and graduating with a degree in English. She spent time as a reporter for the Arkansas Democrat, the Promotions Department of the Arkansas Democrat-Gazette and for Hot Springs Life magazine.

Parkinson’s house is at the top of a rough and rutted driveway in the woods off U.S. 70 near Hot Springs, where she lives with husband Steve and 9-year-old son Casey (son Jasper is 27 and lives in Little Rock; daughter Grace is 18, a student at Hendrix, and provided some of the illustrations for the book). In her living room, with the late January afternoon sunlight streaming in, she talked about her book and Helen Spence.

Parkinson first heard about Spence when she got wind of a documentary about the riverboat people of the White River, a subject close to Parkinson’s heart. Her family had a houseboat on the river near Clarendon, which she visited as a girl. The riverboat people culture effectively was ended by U.S. Army Corps of Engineers projects upriver from Arkansas County.

Through the documentary she met Brown, whose father, Lemuel Cressie Brown Sr., was an Arkansas County deputy sheriff and had known Spence’s father, Cicero. When the film was shelved, she pursued Brown on her own in 2009.

“He’s a piece of living history,” Parkinson says. “I found him in the phone book here in Hot Springs. I called him up and he said, ‘Girl, come over here and talk to me.’”

What she had in Brown was a direct connection to Spence and to the late John Black, her friend who saved many of the articles about her and who secretly tended her unmarked grave in a St. Charles cemetery, a site only he knew about.

BEAUTIFUL INSIDE AND OUT

Spence hadn’t been completely forgotten. Her story would pop up here and there, Parkinson found, but almost always just told in bits and pieces that focused on the flashier headlines - “Arkansas’ Gun Moll!” - and that didn’t capture the Helen Spence she was learning about from Brown.

“Everyone loved her,” Parkinson says. “She was just beautiful, inside and out, and very full of life. She was a crack shot and could sew better than anybody.”

While a prisoner, Spence wrote poetry, prose and a handwritten memoir that was excerpted in a 1935 issue of Daring Detective magazine.

Through her interviews with Brown, Parkinson wrote the 800-word entry for the Encyclopedia of Arkansas History & Culture on Spence, which then grew into the book, a work she refers to as “outsider nonfiction.”

Parkinson re-creates Helen’s youth on the river and conjures the bucolic atmosphere of Arkansas County in pre-Depression days. She also put in the journalistic footwork, tracking down the prison records that detailed Spence’s treatment at the Pea Farm, where, among other things, she was stripped, tied to a barrel, and lashed 10 times after one of her attempted escapes.

Parkinson also details Spence’s incarceration in a tiny wooden cage away from other prisoners, the unusual medical treatments she received (lots of enemas, “like something from a Linda Blair prison movie,” Parkinson says) when she got sick, and a plan by Pea Farm officials to send prisoners to Memphis to work as prostitutes (before leaving for Memphis, Spence sewed gingham table napkins inside her prison uniform. When the prison bus stopped in West Memphis, she ducked into a restroom, turned her uniform inside out and walked away, unnoticed, though she was later recaptured).

The reporting on Spence’s treatment at the Pea Farm is unique, says Guy Lancaster, editor of the Encyclopedia of Arkansas History & Culture.

“The story of Arkansas prisons is so often connected to abuses at Cummins and to race and African-Americans in prison, but there has not been lot written about women’s prisons in the early 20th century.”

For Parkinson, the prison records provided the “Paul Harvey ‘rest of the story’” moment, she says. The records provided reports of Helen’s escape attempts and punishments. Reading that she ended up in the medical ward after one escape, though, without documentation of her punishment, Parkinson was intrigued.

Spence’s fifth escape attempt, on July 10, 1934, ended with her being gunned down from behind by a prison trusty named Frank Martin. The story filled four pages in the Arkansas Gazette, but Parkinson reports that the river folk were suspicious, and a handwritten note, “To whom it may concern: I’ll never betaken alive,” allegedly left by Spence, was a clumsy forgery. WHY CONFESS?

An investigation into Spence’s death, despite inconsistencies, resulted in an acquittal for Martin, and charges against prison administrator V.O. Brockman were dismissed. Still, the biggest head-scratcher of the Helen Spence saga is why would she confess to the murder of Bohots?

Shirley Mitchell of the Grand Prairie Historical Association in DeWitt, who helped Parkinson track down some of the leads in her book, thinks maybe Spence just had a guilty conscience.

“Unless it was her conscience, I can’t think of any reason she would want to go back to prison,” Mitchell says. “Very few people would have done that.”

Parkinson’s own theory runs toward Spence’s craving to return to the river. As part of her sentence for killing Worls and her involvement with the Bohots death (she was with him the night he was killed), she was banned from returning to Arkansas County.

Perhaps, Parkinson ponders, Spence thought she could stick out another stretch in the penitentiary and she’d be allowed to go back home.

Whatever the reason, the second stint at the Pea Farm was too much.

Spence’s body was displayed first in North Little Rock and then in the front window of a DeWitt funeral home, where crowds lined up around the block to see the “White River Gun Girl.” Among them was her old friend, John Black.

In the late ’70s, L.C. Brown was working as a policeman in Hot Springs, following in the lawman footsteps of his Arkansas County deputy sheriff father. It was around this time that Black got in touch with Brown, asking him to come over to DeWitt for a visit.

The river folk aren’t a real talkative lot, and it took two more visits before Black finally got around to telling Brown what he wanted. Black had quietly tended the St. Charles cemetery for years, and he knew where Helen’s unmarked grave was in the cemetery because he’d planted a cedar tree there.

“He said, ‘I helped bury her,’” Brown, 87, says of the conversation he had with Black. “He said, ‘Promise me that you’ll tell this story, the true story, about Helen. … After I die, I want the story told.’”

Brown was reluctant, but Black assured him, “You’ll figure it out.”

In the final chapter of Daughter of the White River, one of the most poignant in the book, Parkinson beautifully tells the story of Black and her new pal, Brown, with whom she shares an obvious bond and respect, linked through poor Helen Spence.

And, true to her objective, Parkinson has painted a much deeper portrait of the enigmatic Spence, with scenes from her childhood on the bounteous and fickle White River, catching catfish, playing with her friends, living on the water and close to the ground, free and easy. Parkinson also captures the reverberations from the world apart from the river and Arkansas County, where the Great Depression and desperate times were creeping closer.

Lancaster believes the book “provides a great service to the historical community.”

“It illuminates a culture that is no longer around, the river people,” he says. “It illuminates an aspect of Arkansas history on which we have very little knowledge, the prison system before Rockefeller-era reforms. It also illuminates the place of women in the Depression era.”

And the element of crime and punishment meted out by a young woman is also an irresistible hook.

“This was a woman carrying out revenge at a trial, not just taking the man’s role as avenger, but taking on the role of the state and dishing out punishment,” Lancaster adds.

Parkinson would like a pardon from Gov. Mike Beebe for Spence, she says.

When asked if there are plans for placing a marker on Spence’s grave, Brown, who is confined to a wheelchair these days after losing his right leg to diabetes, gives a sly smile and pulls from his files of Helen ephemera a mock-up of a tombstone that he hopes will someday mark her grave.

Avenging Angel of the White River

Gone But Not Forgotten