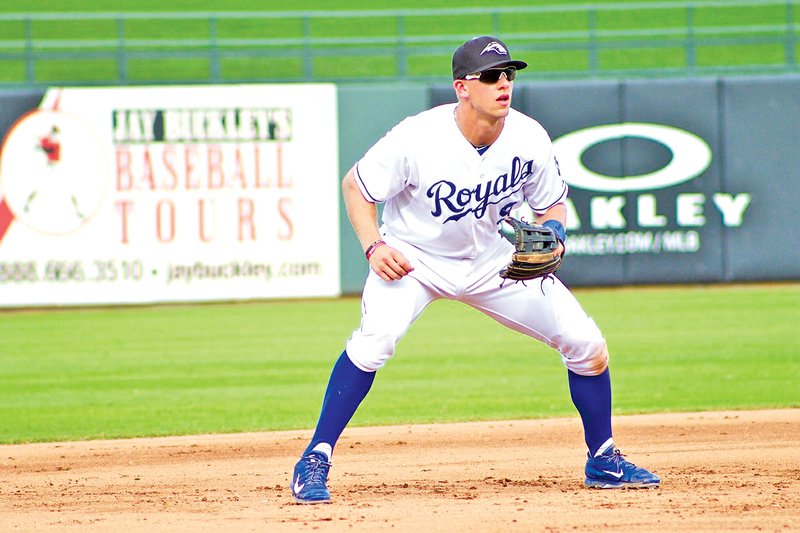 Courtesy Photo Sean Hammond Hunter Dozier, who played 64 game in Northwest Arkansas last season after being promoted from Wilmington, finished strong in the Arizona Fall League, going 11 for his last 22 and led the league drawing 18 walks.

Vance Wilson's off-season didn't start until a few weeks ago, but he's not complaining.

The Springdale resident finished up his first season as the manager of the Northwest Arkansas Naturals on Sept. 1, then got his own September call-up to the Kansas City Royals to help out as an extra coach. But he was also selected to manage one of the six teams in the prestigious Arizona Fall League.

The league, which Wilson credited as a springboard to his own Major League career, is ran by Major League baseball as a training ground for some of the top up-and-coming stars. That includes players, managers and even umpires.

Wilson admitted the experience was surely beneficial for him. He guided Peoria to the West Division title, but the Javelinas came up short in the championship game against Salt River, which was broadcast on the MLB television Network.

"I feel like I'm three times the manager I was when I went out there," Wilson said.

The task of putting together a staff and overseeing a roster of 36 players from five different Major League organizations was daunting, Wilson said.

"I was thrust upon a 36-man roster and 29 of them I didn't know," Wilson said. "A couple more I sorta knew. I felt like I earned their respect quick and they responded to that. It was a huge opportunity in my career I felt. I had a great staff, too, which was big.

"On a personal level, you have to create relationships to be a good manager."

Wilson said he thought he earned the players' respect after a slow start. Peoria won 12 out of its last 16 games to claim the division title with a win on the final day of the 32-game schedule.

"A big thing was getting the players to realize it doesn't matter what organization, there's a right way and a wrong way," Wilson said. "Being that I'm the manager, we're going to do things the right way.

"We started off pretty poorly and we had a hitters meeting and I jumped on them pretty good. I let them know one of my responsibilities as a manager is to make sure they take advantage of this showcase opportunity in front of scouts. You're going to compete and if you don't want to compete, I'll take the phone calls on why you're not playing. The players, they responded and you've got to give them the credit."

The AFL was also different for Wilson because there was more flexibility than on a normal minor league team.

"You get so much stuff that's so regimented in the minor leagues," Wilson said. "Who pitches. What days. That sort of thing. But here you've got a 20-man pitching staff and five are inactive.It's a little more like the Major Leagues as far as who's available and how you use guys."

Hunter Dozier, a first-round pick of the Royals in the 2013 First-Year Player Draft, finished last season with the Naturals and was selected to play for Wilson's Peoria team. He also started slow in the fall, but went 11-for-22 at the plate including a home run in the championship game to finish the season.

"I was in the All-Star game which was really cool," Dozier said. "And we played in the championship game that was on the MLB Network. It was a great experience playing against some of the best guys."

Dozier credited Wilson, a former big league catcher with the Detroit Tigers and New York Mets, for helping him make some adjustments to his swing.

"During the season I got a little too wide in my base and Vance helped me get back to my old stance," Dozier said. "We also worked on changing my contact point out front and Vance really helped me with that. It was feeling really good at the end."

Dozier was one of four current or former Naturals on the Peoria roster.

Wilson liked the progress Dozier made, after struggling at the plate with the Naturals. He hit just .209 in 64 games in Double-A with four home runs and 21 RBIs.

Dozier, rated as the No. 5 prospect in the Royals organization by Baseball America, will likely start next season back with the Naturals, but definitely made improvements in the fall.

"I think it was huge for Dozier in that he learned what you have to do to face those top-notch arms," Wilson said. "You don't see many 88-91s in this league. You're facing 93-97 with good quality out pitches. The biggest thing is he quit chasing the stuff down and away , which he's done in the past."

"Ali is the one I thought took the biggest strides out there," Wilson said. "He's a funny kid. He's always searching, asking questions. He changed his hand placement from low to high and he was as consistent as any pitcher we had out there. He threw 92-95 with two power out pitches. A slider to righties and a split to lefties.

"Of all our guys I thought he took the biggest advantage of the league."

Starting pitcher Miguel Almonte and outfielder Bubba Starling are two more who played for Wilson in the fall and could be in Northwest Arkansas this season.

Almonte's maturity as a pitcher stands out, Wilson said.

"He has an incredible pitch ability about him," Wilson said. "The biggest thing is he can pitch out of jams because he can throw his off-speed for strikes. That's what Major League pitchers do. Obviously, he's got a big arm. He's 94-9 with two above average off-speed pitches."

Wilson also said Almonte is ahead of where hard-throwing Yordano Ventura was at the same point in his career.

"They are two different type pitchers," Wilson said. "Where Ventura was all power, Almonte knows how to pitch. He's in and out and throws his stuff below the zone."

Starling, a former first round pick, is still trying to iron out some mechanical difficulties with his swing. But Starling can play center field at the big league level, Wilson said.

"He's a Major League center fielder right now," Wilson said "I was blown away. I had been told how good he was defensively, but I was blown away. He had a better second half for us and competed better."